Back to Discernment Home

Discernment in the Episcopal Diocese of Los Angeles 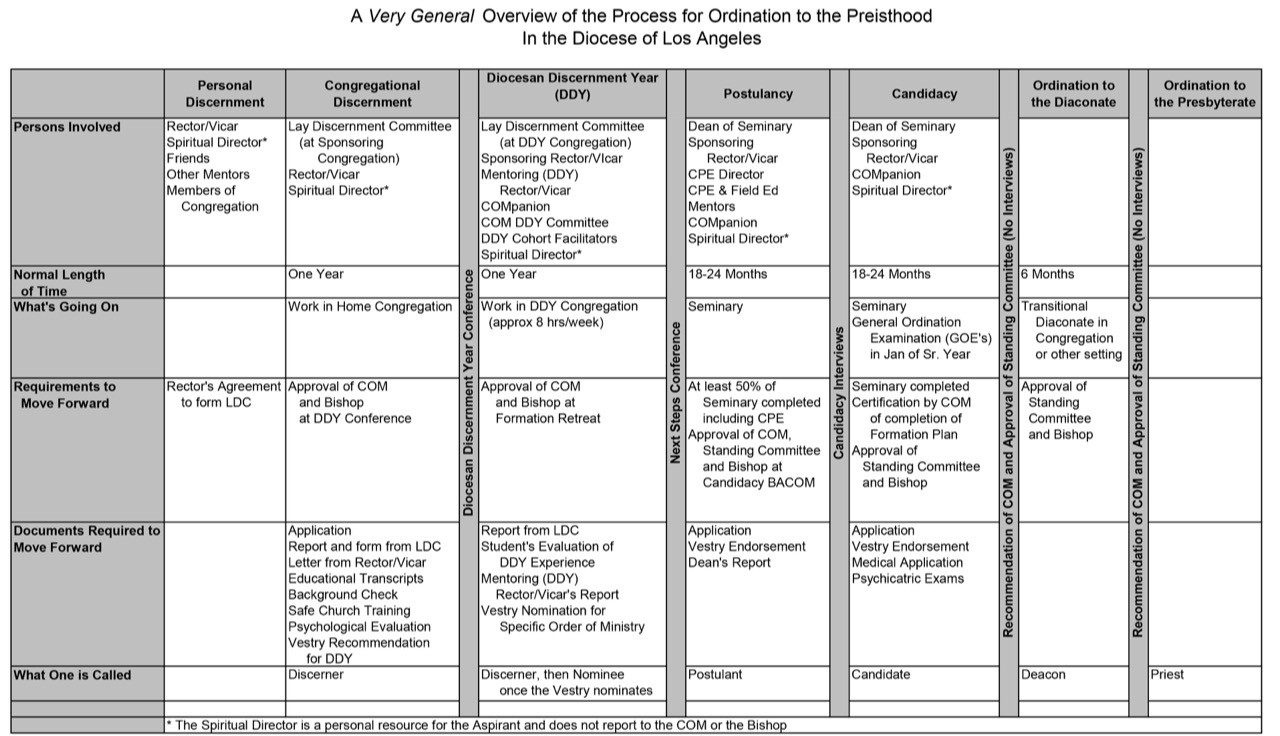 CDSP:  The Church Divinity School of the Pacific, the Episcopal seminary in Berkeley, California.

CPE:  Clinical Pastoral Education, usually done during seminary at a hospital or similar setting.  Required of all persons in the ordination process and must be done before Candidacy consideration.

CST: The Claremont School of Theology, with which Bloy House (ETSC) is affiliated.

DDY:  Diocesan Discernment Year is a year of work and discernment in a congregation not one’s own to help a person test and discern the nature of the call to ministry. During the year, the student works 6 – 8 hours a week under the direction of a mentor priest and with a discernment committee.

DDY Conference:   A Saturday conference held once a year in March giving Standing Committee and COM members an opportunity to meet and interview those interested in entering a Diocesan Discernment Year.

ETSC:  The Episcopal Theological School at Claremont (also known as Bloy House). It is a part of the Claremont School of Theology, which is the institution which grants the M. Div. degree.

ETSS:  The Episcopal Theological School of the Southwest in Austin, Texas.

GOE: General Ordination Examinations. Normally taken in January of a Presbyteral Candidate’s last year in seminary, these are written exams on subject matter prescribed by Canon III.7 (Holy Scriptures; Church History, including the Ecumenical Movement; Christian Theology; Ethics and Moral Theology; Studies in Contemporary Society, including racial and minority groups; Liturgies and Church Music; and Theory and Practice of Ministry). In this Diocese, the GOE is used as a diagnostic guide, not an absolute determination of whether or not one will be ordained.

Canonical Exams:  Are exams taken by people being ordained to the Diaconate (Canon 6) and cover these five Canonical areas as prescribed by Canon III.6 Academic studies including, The Holy Scriptures, theology, and the traditions of the Church; Diakonia and the diaconate; human awareness and understanding; Spiritual development and discipline; practical training and experience.  In addition, course work on misconduct prevention training, civil reporting requirements Title IV, and Church’s teaching on racism. In this Diocese, Canonical exams used as a diagnostic guide, not an absolute determination of whether or not one will be ordained.

Discerner:  One who has been nominated by a faith community to enter a further diocesan Discernment process for either lay leadership with in the church or ordained ministry.

Nominee:  One who has been nominated by a faith community and completed a DDY and has applied to the ordination process but who has not yet been accepted as a Postulant to either the Diaconate or the Presbyterate.

Candidate:  One who has completed generally 18 months as a Postulant and is at least halfway through seminary and meets other canonical and diocesan requirements.

Field Education:  often referred to as Field Ed or Field Work, this is a seminary course which includes time spent weekly in a congregation other than one’s sponsoring congregation.

Next Steps Retreat: A Friday evening/Saturday opportunity (held once a year in May) for Commission and Standing Committee members to meet and interview Nominees to recommend Postulancy or Lay leadership.

Mentoring Clergy:  The Rector or Vicar at Discerner’s Diocesan Discernment Year congregation, who provides guidance throughout the year.

Postulant:  One who has been accepted into the ordination process and has met certain canonical and diocesan requirements.

COMpanion:  A member of the Commission on Ministry who is responsible for establishing and maintaining contact with a person in the Diocesan discernment Year program or in the ordination process.  See “The Commission’s Part in the Ordination Process.”

Sponsoring Clergy:  The Rector or Vicar at a Discerner’s sponsoring (“home”) congregation, who, with the Vestry or Bishop’s Committee, agrees to sponsor the person for ordination or lay leadership.

Go Back
Step by Step Guide to Discernment