Based at St. Paul’s Commons in Echo Park, the Diocesan Program Group on Ecumenical & Interfaith Life serves both local congregations and the wider Southern California community with resources, programming and communication services aimed to strengthen and widen interfaith collaboration. A joint Episcopal-Lutheran body, the Program Group includes representatives of the Southwest California Synod of the Evangelical Lutheran Church in America. Central to the work of the Program Group on Ecumenical and Interfaith Life are the insights of three Diocesan interfaith ministers in residence, Tasneem Noor, Sable Manson, and Tahil Sharma (Please see bios below). 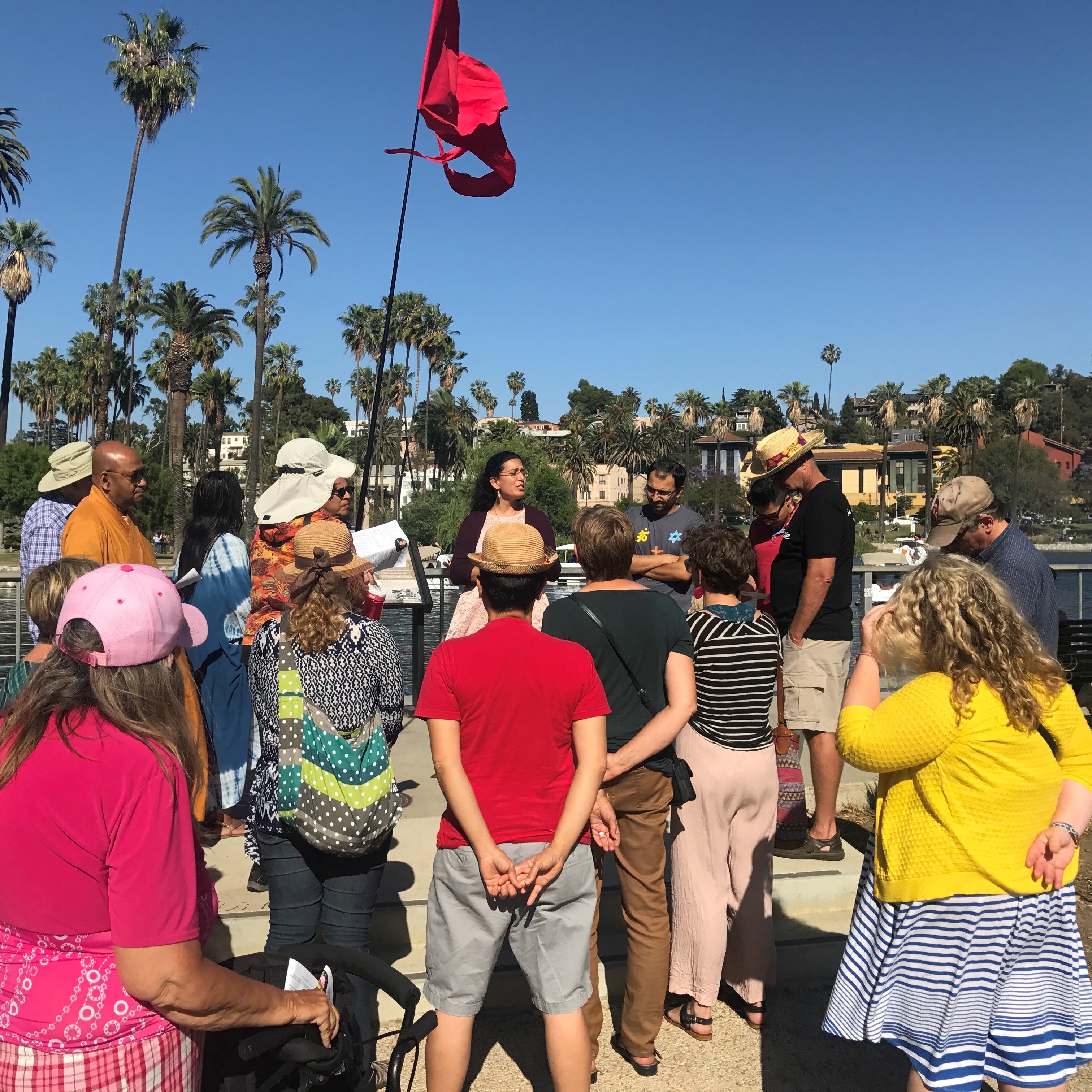 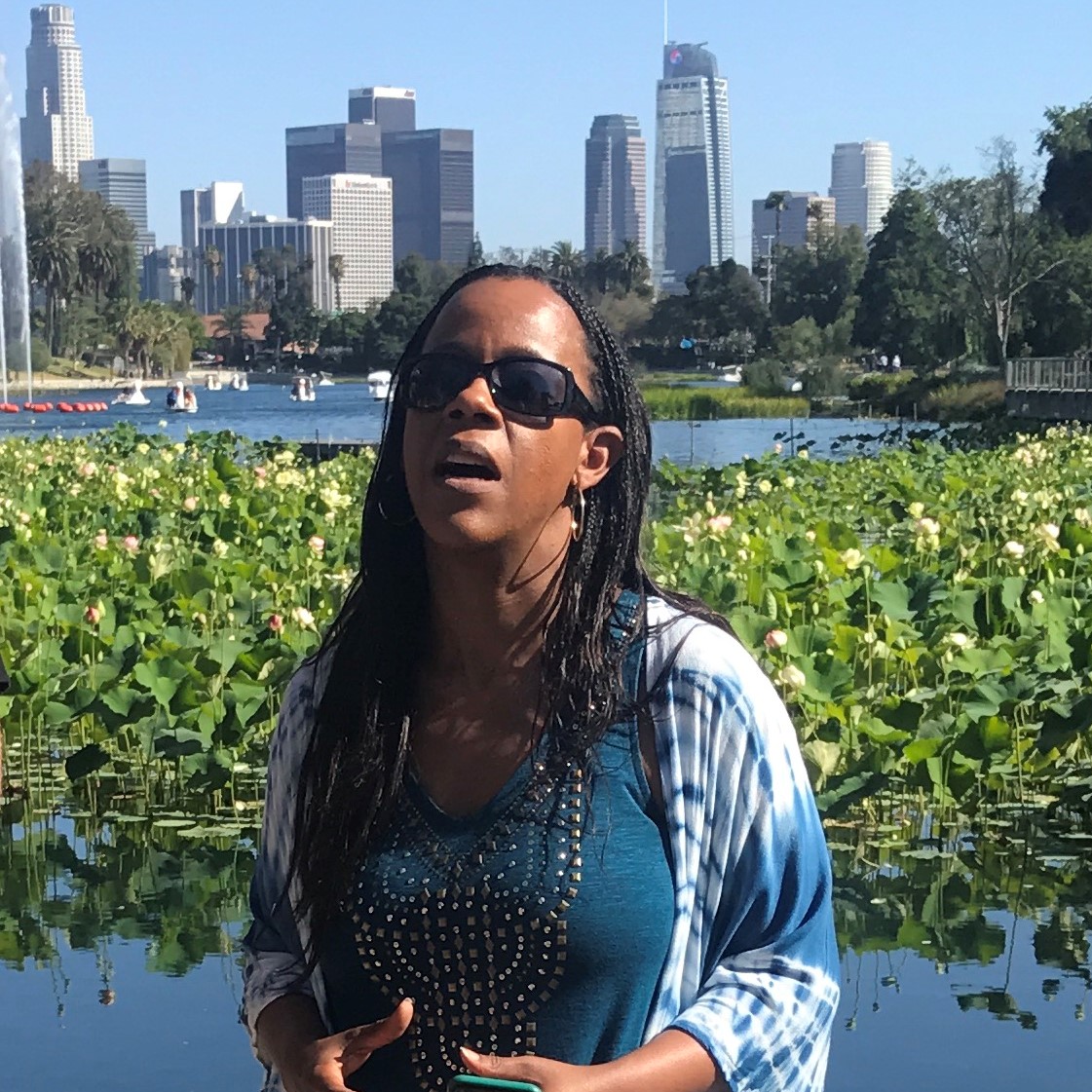 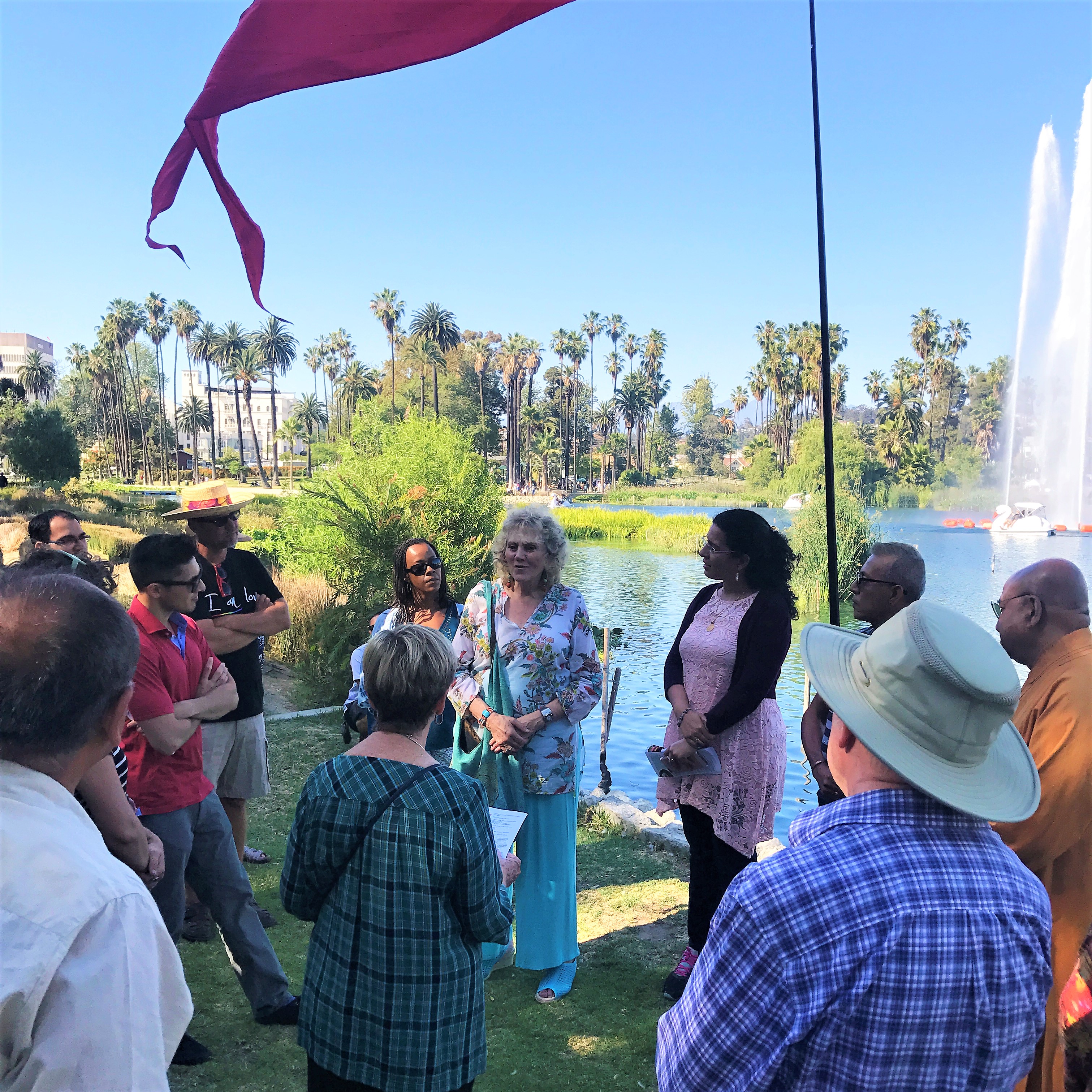 Service Projects – The Interfaith Cooperative is active at present in assisting with capacity-building and communication infrastructure development for two longstanding organizations: the Interreligious Council of Southern California and the Los Angeles Council of Religious Leaders. Annual events include the Echo Park Walking Meditation on Interdependence (Early July; see photos) and a series of study days for interfaith activists and contemplatives.

Sable Manson, Ph.D. is the Souljourners Program Director for the Office of Religious Life (ORL) at the University of Southern California. Souljourners encourages interfaith engagement through co-curricular experiences and weekly written reflection. Through her work at ORL, Sable has managed a religiously themed residential floor, as well as researched religious affairs administrators’ spiritual development and students’ mindfulness practices in college. In her time at USC she has also partnered with the Joint Educational Project, the university’s 40 year old service learning program, to design curriculum for undergraduates and professional development experiences for student leaders. {In 2015 Sable, was identified as one of the Future50 Faith leaders in Los Angeles by USC’s Center for Religion and Civic Culture and the Interreligious Council of Southern California (IRC).} She currently serves as the Co-Chair for Research for NASPA’s Spirituality and Religion in Higher Education Knowledge Community as well as contributing to Patheos’s blog series Spirituality Itself. Her research interests include religion and spirituality in higher education, interfaith on campus, and spirituality in digital spaces. Her current work around #DigitalFaith examines how individuals are using digital spaces and technologies for spiritual and religious exploration. In 2016, she begins a yearlong appointment as a Journal of College and Character Ambassador.

Tasneem Noor is the award-winning author of The Faith Connection: Your Journey Starts with Knowing Yourself. After a rewarding career in higher education for seven years, Tasneem transitioned to coaching and facilitation. Tasneem is the founder of Noor Enterprises: SOULful Transformations—committed to providing transformational experiences, personal development, and opportunities for meaningful dialogue. Her mission is to establish thriving, peaceful communities where conversations of faith build bridges of compassion and collaboration. Through coaching, trainings, and facilitation she helps people learn how to deepen their faith (self-trust), authentically express themselves, and take courageous action.  Tasneem has her Master’s in Education from the University of California, Los Angeles (UCLA) and her coaching certification from the Life Mastery Institute. She is a facilitator for NewGround: Muslim Jewish Partnership for Change; and active with several community building projects. She is serving on four different interfaith boards including the Interfaith Council at the Islamic Center of Southern California. The Inter-religious Council of Los Angeles has recognized Tasneem as an emerging faith leader; she is a member of the Inter-religious Council as an official representative of the Islamic Center of Southern California.

Tahil Sharma, North American Regional Coordinator of the United Religions Initiative, is a nationally recognized leader promoting religious/secular pluralism and social justice. He has served as Faith Partners program manager of Brave New Films, the Hope Not Hate Campaign Coordinator for AMP Global Youth, a project of Americans for Informed Democracy currently sponsored by the Stevens Initiative at the Aspen Institute. He currently serves as a UN DPI-NGO Youth Representative for the Parliament of the World’s Religions and the Interfaith Liaison for Sadhana: the Coalition for Progressive Hindus. Tahil also serves as a member of the Working Group on Youth and Gender Equality for the UN Interagency Network on Youth Development. He previously worked as a consultant for Interfaith and Youth Engagement with The Guibord Center in Los Angeles and for Communications and Social Media with Religions for Peace International in New York City. He previously worked as a Co-Chair for the Claremont-La Verne Relay for Life, sponsored by the American Cancer Society. For his work in interfaith cooperation, Tahil was named a Newman Civic Fellow by Campus Compact in 2013. Tahil has written for the Huffington Post, Georgetown’s Berkley Center, and The Blog at the Interfaith Youth Core. In 2015, Tahil was identified as one of the Future50 Faith leaders of Los Angeles by USC’s Center for Religion and Civic Culture and the Interreligious Council of Southern California (IRC).