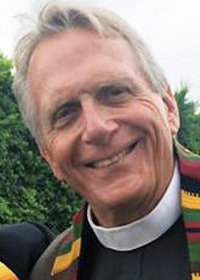 The Rev. Tom Carey, vicar of Church of the Epiphany, Lincoln Heights (Los Angeles), since 2010, will serve as dean of Deanery IV beginning Jan. 1, according to Bishop John Harvey Taylor.

Carey, a former Franciscan monk, was ordained to the priesthood in 2003 in New York, where he led St. Patrick’s Church in Deerpark, Long Island, and Church of the Redeemer in Astoria (New York).

“Tom will bring his pastor’s heart, a prophetic voice, and his infectious joy to his work as dean, gathering, counseling, and representing the deacons and priests of Deanery IV,” said Taylor. “Bishop Bruce, Canon McCarthy and I look forward to our ministry together.”

“The great thing about Deanery 4 is that there’s always been a great deal of collegiality and most of us have been really good about meeting,” Carey told The Episcopal News in a recent phone interview. “My main goal is to continue that, because I thought that was so helpful.”

Carey noted that Deanery IV is typical in that its congregations are facing a changing world. Not only must it meet the challenges of the pandemic, but broader questions about how the Episcopal Church can stay relevant in what he calls “a completely secularized world.”

“I think the answer is that we partner; not necessarily joining congregations, but we partner with other organizations, we partner with our neighbors,” he said. “I think now we’re being called and pushed to open ourselves out so that it’s not even necessarily a religious agenda; it’s a community agenda. Teamwork is a manifestation of our theology, which is that this is the body of Christ.”

How should the church open out? To begin with, Carey said, by widening its horizons, listening to new voices, and building new relationships.

“One of the things that we could do in the deanery is have people come and talk to us who work in the community about what they’re doing,” he said. “Not necessarily with an agenda that we’re going to join or do some project together, but that the connections get made; so that when something arises we already know this person, that we’ve already talked to them, and they know us.”

Carey was born in Santa Monica in 1951, son of film star Harry Carey Jr. and grandson of Harry Carey Sr. and his wife Olive and, on his mother’s side, of Paul Fix, all well-known Hollywood actors. In 1977 he moved to New York to, as he says, “join the family business.” He appeared in several plays and films, including “Plaza Suite,” “The Day of the Locust” and “The Blue Knight.” He also performed with a punk band, was a literary assistant to poets James Schuyler and John Ashbery, and earned a degree at Columbia University. He joined the Franciscans as a monk in 1988, remaining with the order for some 20 years. During his New York residence he also served as a youth minister, taught poetry in public schools and ran a theater program for inner city children.

He returned to California and earned a master of divinity degree at CDSP before being ordained. In addition to his leadership at Epiphany, he is an activist for justice issues, often lending his musical talents to protest events, and working with Sacred Resistance, the diocese’s ministry on behalf of immigrants and refugees. He has published a novel, Small Crimes (2011) and a volume of poetry, Desire: Poems 1989 – 1996 (1997), a Lambda Literary Award finalist.