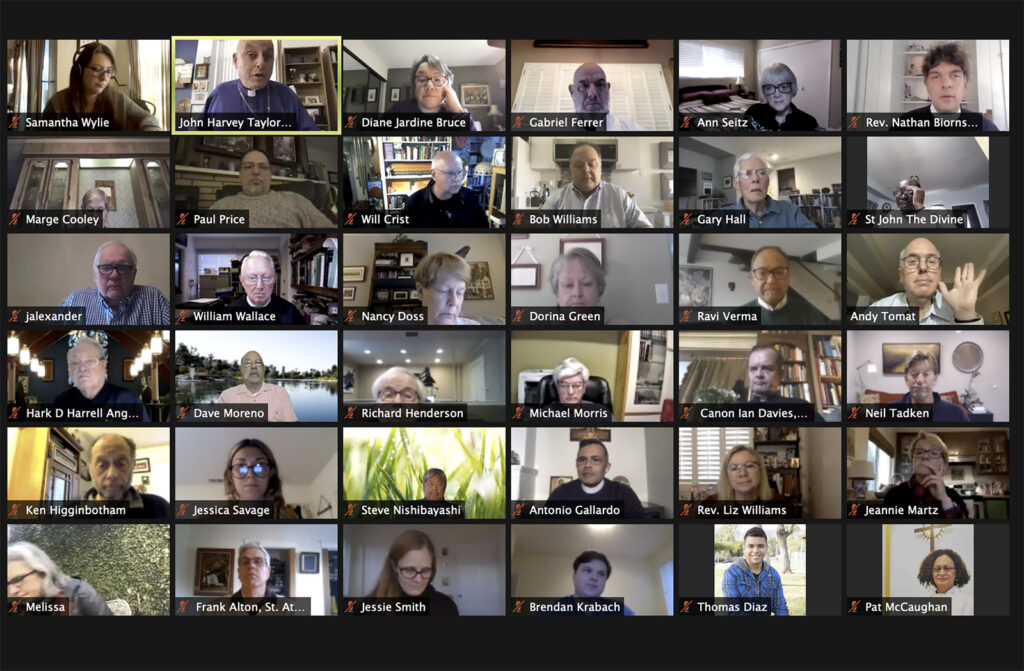 Treasurer Andy Tomat reported that half of the 90 parishes in the diocese have turned in mission share fund (MSF) pledges for 2021. Canonically, parishes are asked to give 12-15% of their annual operating budget, and mission congregations are required to give 10% of their annual plate and pledge income to the MSF, from which income to support mission congregations and diocesan ministries is derived.

On a positive note, many parishes are pledging more. “Despite all the challenges, we are so heartened by the many parishes who have not only increased their dollar but also their giving levels from an average of 9.2% to 9.7% of 2019 net operating income,” Tomat said. “So, we are making progress towards the canonical minimum of 12%. All 37 Missions give at 10%.”

However, past-due pledged MSF amounts doubled in January from the previous month and the Finance office and MSF missionaries will follow up with congregations who have fallen behind. Any church with questions about monthly MSF invoices is urged to contact the finance office at finance@ladiocese.org. Tomat said mail service is frequently delayed for up to two weeks and that staff has a staggered on-site work schedule due to COVID restrictions, so record updates may take a couple of weeks.

The Corporation of the Diocese and he are considering structural changes, including an increase in membership size and a dramatic expansion of its mission, taking on all the governance obligations of a modern non-profit board of directors, “with the goal of ensuring the thriving of mission and ministry in the diocese and ensuring that those doing ministry get the support they need to do it,” Taylor said. He said the diocese would close a church only with the greatest reluctance, but even if it did, the Corporation’s mission should be to ensure that worship and service continue in that neighborhood and community, Taylor said.

He will also name a consolidated budget committee, to be convened by Tomat, to include council and Corporation of the Diocese members earlier in the 2022 budget process.

Taylor also referenced the diocesan capital campaign, which aims to raise $30-40 million over three to four years. Its success depends on collaborative and cooperative campaigns with schools and missions and parishes, he said. He invited those in leadership to consider their long-term capital needs, “whether endowment or bricks and mortar or just repairs and upkeep. We’re going to be looking for partners.”

“We are going to invite many underrepresented voices; specifically, Black leaders in our communities that don’t often get that visibility,” preceded by workshop or ally-building efforts, he added.

Ecumenical efforts, including the full communion agreement between the Episcopal and Methodist churches, will be considered at the next General Convention of The Episcopal Church, postponed until July 2022 in Baltimore because of the pandemic.

Canon Bob Williams, diocesan Canon for Common Life, who serves with Taylor on the Los Angeles Council of Religious Leaders, reported opportunities for collaboration among interfaith partners, who are experiencing similar challenges regarding equity of vaccine distribution and finances. “So many of the faith groups have more buildings than they can possibly use and so it’s an opportunity for common cause and for sharing.”

Williams also reported that the Program Group on Communications is offering a range of online webinars to assist congregational use of social media. The communications department is working on a platform to make Spanish language content more readily accessible.

The Rev. Will Crist, deanery10 representative, offered information about Dignity Moves, a project that alleviates homelessness through the use of portable prefabricated units that can be set up on as little as a quarter-acre of land for a period of a year to offer transitional supportive housing for the unhoused.

The Very Rev. Gary Hall, Bloy House dean, reported that the Standing Committee
is planning an April 15 release of the Lombard Peace Center report issued after the conclusion of the formal diocesan reconciliation process with St. James’ Church in Newport Beach.

Canon Steve Nishibayashi reported that planning is underway for the November 2021 diocesan convention, themed “Truth and Love,” although it is unclear if it will be virtual or in-person or a combination this year.

Nishibayashi’s monthly newsletter “Convention Notes” will be available in Spanish and English. Congregations are asked to submit delegate contact information to the Secretary of Convention office. Parochial reports were due March 1. The reports allowed congregations to respond to pandemic-related changes in the styles of worship and ministry.

Samantha Wylie, diocesan convention coordinator, updated council on the ongoing “Servants of the Spirit” ministry fair webinars. The second of a two-part workshop for church treasurers will be held at 9 a.m. on Saturday, April 10.

Also, Wylie reported, at 9 a.m. on Saturday, March 27, Nina Harawa, Ph.D., a member of Holy Faith Church in Inglewood and an epidemiologist and professor in residence at the David Geffen School of Medicine at UCLA, will lead a workshop on the safety and efficacy of the Covid-19 vaccines. All workshops are conducted in Spanish and English, are livestreamed on the diocesan Facebook and YouTube pages and recorded for future viewing.

Of special note, Canon Suzanne Edwards-Acton will lead an April 7 anti-racism webinar introducing “My Work to Do,” featuring the work of the online anti-racism affinity group that helps participants “build stamina for discussions about systemic injustice, racial healing and racism.”

Returning to in-person worship, a virtual ‘Called to the Wall’

Bishop Suffragan Diane M. Jardine Bruce announced a virtual “Called to the Wall” pilgrimage in support of immigrants at 4:30 p.m. on Saturday, May 15 in partnership with the bishops of the dioceses of San Diego and Northwest Mexico.

Bruce reported that she has resumed in-person pastoral visitations, and that New Community ministries, including The Gathering, a space for Asian American and Asian Pacific Islander spirituality; Latino/Latina ministries; and Black ministries are actively planning upcoming events.

The Program Group on Stewardship and Sustainability is also planning a series of 2021 webinars on various topics, including how to talk to millennials about giving, legacies and more, in partnership with The Episcopal Network for Stewardship, or TENS.

Taylor offered a quick snapshot of the recent House of Bishops gathering, where bishops held courageous conversations about current social challenges, including, at the Jan. 6 insurrection at the Capitol, “the scary presence of Christian nationalism, associating the gospel with the state, money, power, and whiteness.”

In response to a question about returning to indoor worship, he said that once counties go back to the red tier in California’s Covid-19 color-coded case tracking system, leadership teams at parishes and missions will have the discretion “to go to inside worship, with modifications, the same 25% of capacity, or 100%, or 100.” (A new set of diocesan guidelines for returning to in-person worship was released on March 16 and is available in English and Spanish.)

Singing will continue to be restricted, Taylor said, adding, “So we are not going to have the Easter we were hoping for but, depending on the local churches’ decisions, we might at least be with one another.” (The new guidelines, prepared by Taylor’s Council of Advice, do permit solo and small-choir singing with appropriate precautions: congregational singing is still banned in all circumstances.)

The council’s next online meeting is 4 p.m., Thursday, April 15, a week later than usual because of Easter week.