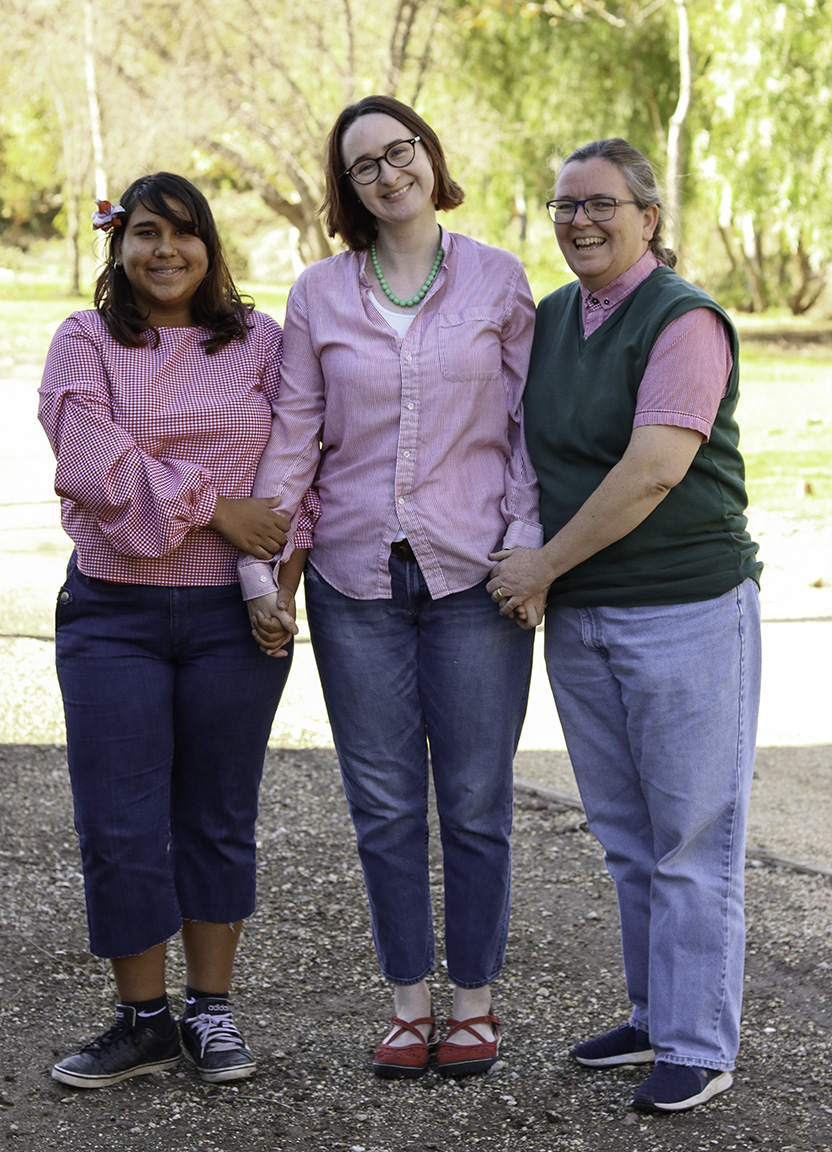 Genesis Monica stands with her adoptive parents, Melissa and Alene Campbell-Langdell. The adoption was carried out through HFS about five years ago, when Genesis was 12. Courtesy photo

[The Episcopal News] Genesis Monica had spent much of her young life in the foster care system and was hoping to be adopted when she met Melissa and Alene Campbell-Langdell, both Episcopal priests, who were hoping to become parents. Now, with the help of the Holy Family Services Adoption Agency, they are all family.

“We all bonded strongly,” recalled Genesis Monica, 17, during a recent telephone interview with The Episcopal News. “Holy Family – they were amazing, I appreciate them for all they’ve done, getting us to a place where we are stable. And they are big members of this whole family.”

“Genesis said, ‘I want to be adopted,’” Melissa Campbell-Langdell said. “That wasn’t an option with her foster care placement, and she felt like she had a connection with us. Holy Family helped us all along the way, they were an advocate for us, they’ve helped us negotiate the process and they’ve stayed in touch even after we adopted Genesis.”

HFS is an institution of the Episcopal Diocese of Los Angeles, and since 1949 has placed over 7,000 infants and children for adoption. The oldest adoption agency in Southern California, HFS serves primarily Riverside, San Bernardino, Orange, and Los Angeles counties, according to Julie Brown, executive director.

Foster homes are needed more than ever, especially for newborn children through 5 years of age, and for teenagers. Brown said the pandemic forced into retirement a significant number of foster parents, who tended to be in their 50s and 60s, a population vulnerable to COVID-19.

At the same time, the need has surged. “At any given time, Centinela Hospital has between 10 and 15 newborns that are on a hospital hold through the Los Angeles Department of Children and Family Services, DCFS, and they don’t have a placement for them, so they sit and wait for discharge.”

In San Bernardino County, one in five children entering the foster care system for the first time is less than one year old, she said. In Riverside County, the number of youths in the foster care system has doubled in the past five years. Los Angeles County has the largest population of foster youth in the nation, she said, averaging about 33,000 children under the supervision of DCFS.

The process, though complicated and thorough, has been streamlined to facilitate placements, Brown said. In addition to home visits and inspections, and interviews, prospective parents must undergo 30 hours of training, available on video, and be certified in first aid and CPR. They are fingerprinted and must pass a background check; provide income and employment verification; and undergo medical and other exams to ensure their capability for caring for a child. 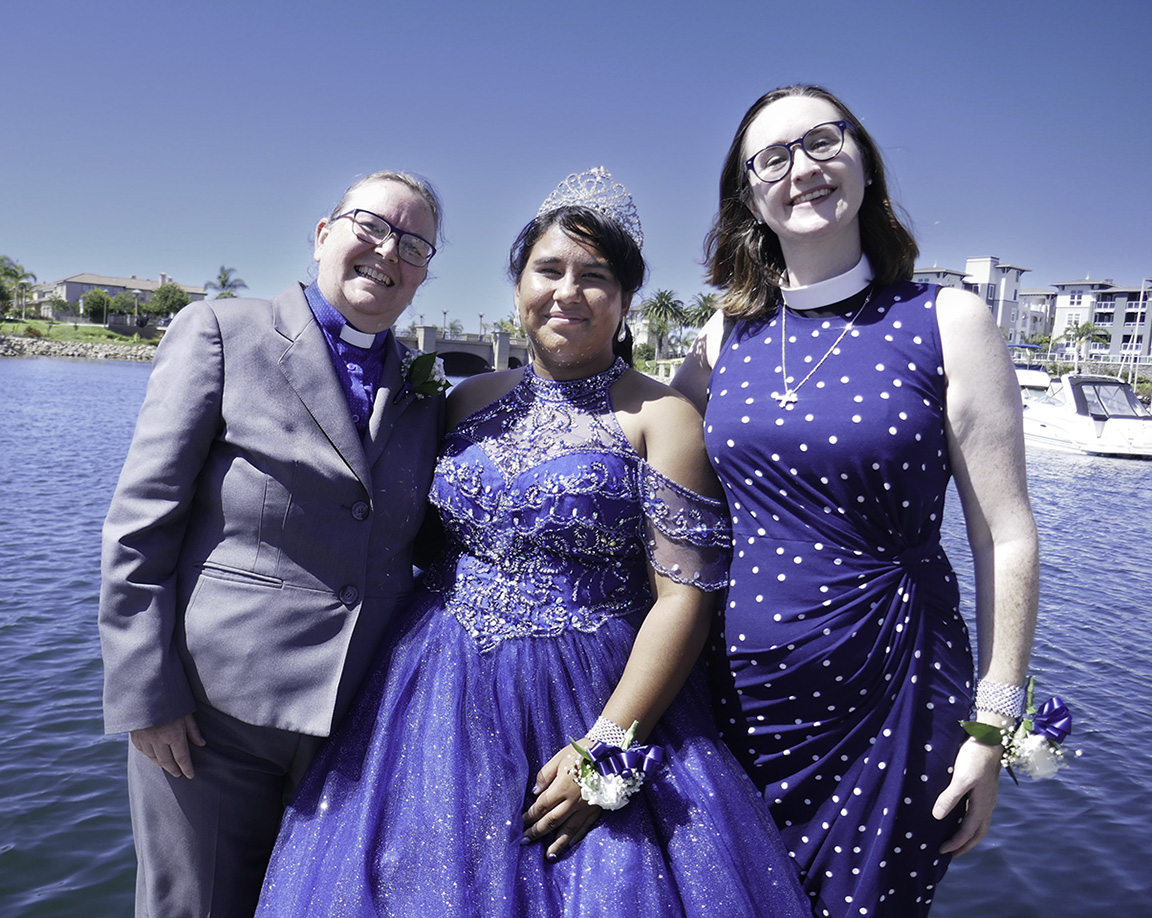 “There is quite an extensive interview form,” Melissa Campbell-Langdell said. “There’s a lot of paperwork, meetings with social workers, and it’s important to do it with an agency like HFS because there is someone who will help you negotiate the process, and not feel lost in it.”

As she and Alene, a social worker with the Oxnard Family Circle Adult Day Health Care Center, contemplated parenthood, “we did a whole lot of soul searching,” she said.

“We needed to be clear about our limits. Holy Family helped us not feel guilty about what we were and weren’t able to do. We kept coming back to all the children already needing homes. We knew we had the capacity, through our experiences as priests, to help a slightly older child who had gone through emotional distress,” added Melissa, rector of All Saints/Todos los Santos Church in Oxnard.

Still, there were surprises. Expecting a younger child, “we had all our furniture earthquake-proofed; we packed away cleaning materials and got more organized,” Melissa said. “It’s kind of funny, we had done all these babyproofing things and when Genesis moved in, she was 12.”

Throughout, “it felt like God was guiding us,” added Melissa, who is white. For example, the large Mexican American and Latino presence among her congregation, “has been super-supportive. It has been a real benefit, because Genesis is Mexican American, so she’s been able to feel connected to her culture in the parish setting.”

Brown said HFS also aids children in need of short-term and longer-term fostering and hopes that diocesan community members will consider getting involved.

“We really want to make sure we help the county agencies so that children don’t have to languish in temporary housing or a hospital and not have a roof over their heads,” she said. “The Episcopal Church is a wonderful place to start seeking foster parents because we are so welcoming about how to define a family. We would be, as a general rule, a great population especially for families open to LGBTQ kids or children from an immigrant background.”

Before her adoption, “I was really suffering from trauma,” according to Genesis Monica, who now goes by her middle name. “My whole childhood, I was in and out of foster care, ever since I was a baby. When people ask me, ‘how was your childhood?’, I say it was in a courtroom.”

Now, she has plans for college and becoming a filmmaker. Agreeing to adoption, “was a good move,” she said. “I moved in with Melissa and Alene on Nov. 10, 2017. It was such a special day, I have it memorized. Ever since then, we’ve all just been doing good as a family. I have been feeling more independent, and able to grow.

“My academics have been amazing and I’m in better condition and health. I’ve been able to get therapy and to seek help,” she said. “I’ve grown as a person. Holy Family is just an amazing group of people who know how to find the right fit and to 1,000-percent support you in every way until they know they’ve accomplished what they need to for you.”