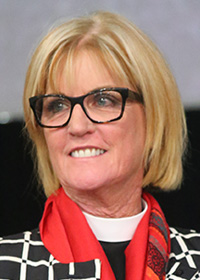 “Michele has played an indispensable role over the last three and a half years in helping us reimagine the finances and structures of the diocese,” said Bishop John Harvey Taylor. “In seeing us through the PPP process, she was relentless about keeping track of thousands of details on behalf of the diocese and our missions. She is also a gifted teacher about parish finance, and we’re hopeful about educational collaborations to come even though she’ll be a neighbor rather than a resident.”

“Michele is a consummate professional who not only understands the ins and outs of finance and accounting, but is a gifted teacher,” said Bishop Suffragan Diane Jardine Bruce. “To have had a CPA on staff who is also a priest – this dynamic combination equipped her to be pastoral while at the same time ensuring that congregations understood all the nuances of financial transactions. She was a great collaborator – I miss her already!”

The Rev. Canon Melissa McCarthy, diocesan canon to the ordinary and chief of staff, concurs: “I echo what our bishops and colleagues have said about Michele’s important work here in EDLA. In addition, she’s a great colleague and friend, and I will miss her.”

“In recruiting Rev. Michele, we found the perfect trinity of church financial expertise: auditor, CPA, and priest,” notes Canon Andy Tomat, treasurer of the diocese. “And those skills were exactly what we needed in our mission to improve the transparency and governance of our diocesan financial stewardship. In addition, as a priest she was able to relate so well to our clergy in educating them in the best financial practices to follow in their church leadership role.”

“It has been a joy and privilege to serve in the Diocese of Los Angeles,” Racusin told The News. “I will forever cherish the many relationships that were forged, teams that worked seamlessly, life events and stories shared, the support we gave one another, and the fun we had. As we discover along The Way, the Spirit blows where She will and we are richly blessed by her movement. I am thankful for all that has been and look forward to ongoing collaboration as we continue to labor in the sacred ministries we are called to encounter.”

A certified public accountant with more than 30 years’ experience, Racusin was ordained to the priesthood in 2005 in the Diocese of California by then-Bishop William Swing. She went on to the Diocese of San Joaquin to serve as rector of Holy Family, Fresno, from 2009 to 2016, and thereafter led the congregation of St. James’ Cathedral, Fresno. Growing up in the Diocese of Los Angeles, she was confirmed and later married at St. Peter’s, Santa Maria. While a student at UCLA, she attended St. Augustine’s by-the-Sea, Santa Monica, and Canterbury Westwood.

Racusin and her husband, Samuel, reside in Clovis, Calif., and are parents to four adult sons.