‘My vote makes me free’: Bishop Taylor encourages civic participation in virtual ‘Service of Prayer for Our Nation’ 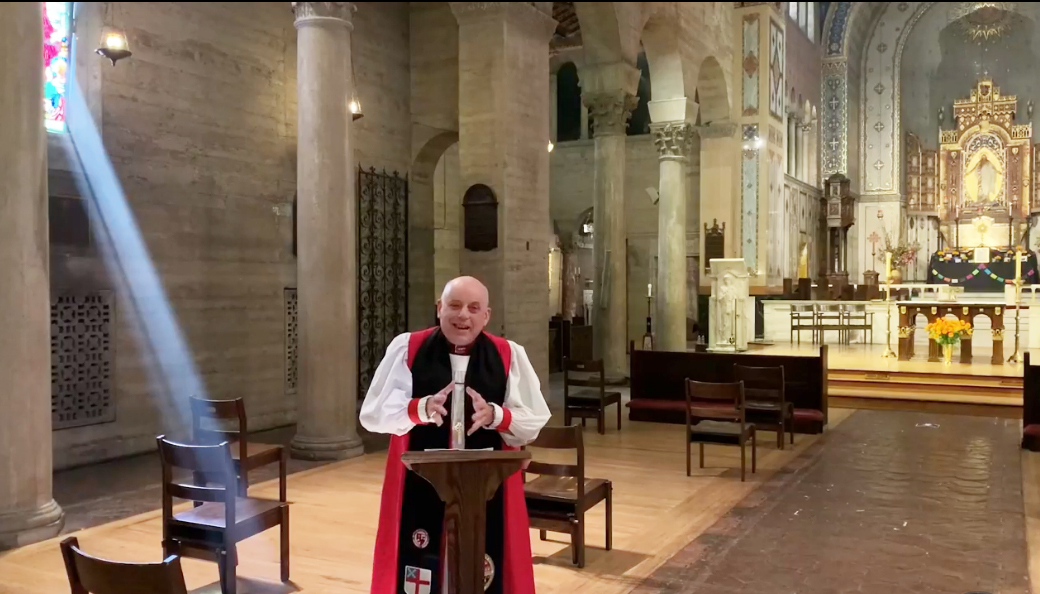 Bishop John Harvey Taylor delivered a homily on the importance of engaging in civic society. “Jesus’s proclamation of a kingdom of justice and peace requires more of us than thoughts and prayers,” Taylor said. “More even than outreach and advocacy. It requires us to lean into our freedom – our freedom as people of faith and our hard-won freedom as citizens.” In short, he said, it requires us to vote. 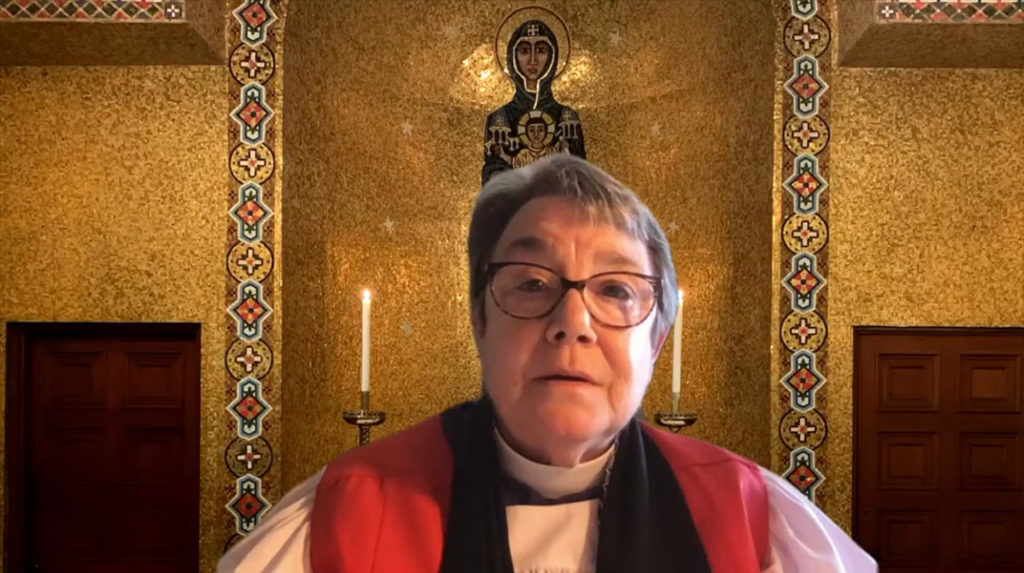 Diocesan Bishop John Harvey Taylor pressed Southland Episcopalians to vote and to “urge others to vote—especially those around us who might be reluctant, who might think they don’t count,” during an Oct. 29 live-streamed pre-election service of prayer, protest and song.

Taylor invoked poet Walt Whitman’s classic poem “I Hear America Singing” as a call to freedom, to inclusion for all and to action against injustice. “My vote makes me free,” he told a combined Facebook and YouTube audience of some 1,400 viewers.

“One day on Facebook, I provoked a little controversy by writing this: ‘Jesus Christ died so we could vote,’” Taylor said.

The full service may be seen on Facebook here or YouTube here. The full text of Taylor’s homily is here. 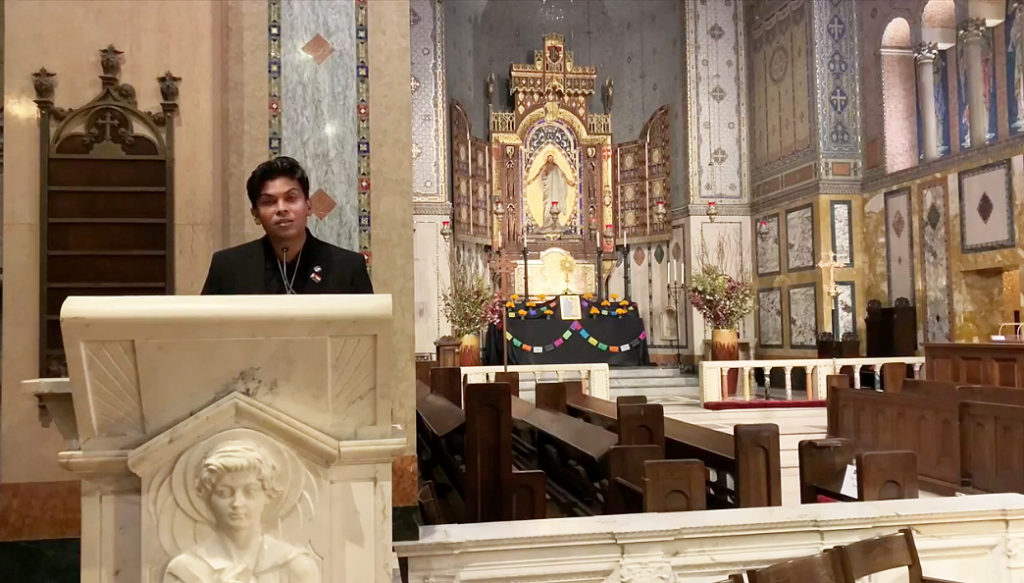 Kowalewski welcomed the diocesan community “home to the cathedral.

“A cathedral is like coming home to your grandmother’s house. It is a place where everybody can feel at home … a wonderful place to gather in momentous times, and right now we are in one of those momentous times.”

The 7 p.m. service also offered unity, Ade said. It was an opportunity to lay aside anxiety, anger and frustration, and the easy temptation to discount those with whom we disagree politically or socially and to “place ourselves in the arms of the lover of souls.” 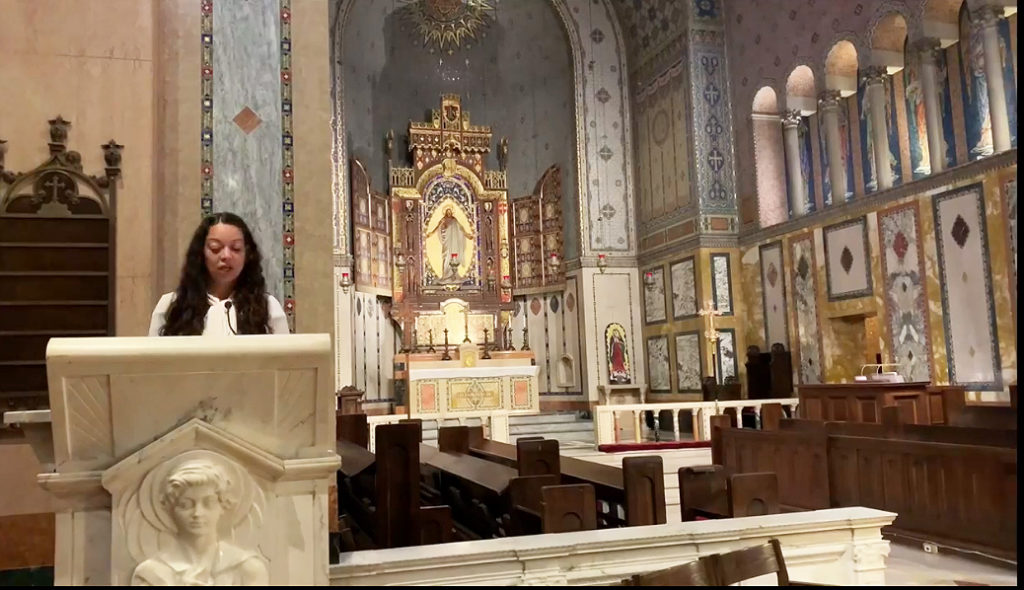 Bruce told viewers in Mandarin, Spanish and English that, regardless of political differences, “What binds us together is that one Eucharistic table we all gather around. All are loved. All are cared for and together the strongest, most powerful thing we can do for each other and for our nation is to pray.”

Musical offerings figured prominently, from prelude to postlude, mirroring both praise and a spirit of protest.

St. John’s organist Zach Neufeld offered an improvisational fusion of the patriotic “America the Beautiful” and the civil rights protest anthem “We Shall Overcome,” while Lewis Johnson, Ben Greenberg and John-Kevin Hilbert from St. Augustine’s Church in Santa Monica offered the concluding Kyrie in a setting by Antonio Lotti (1667 – 1740). 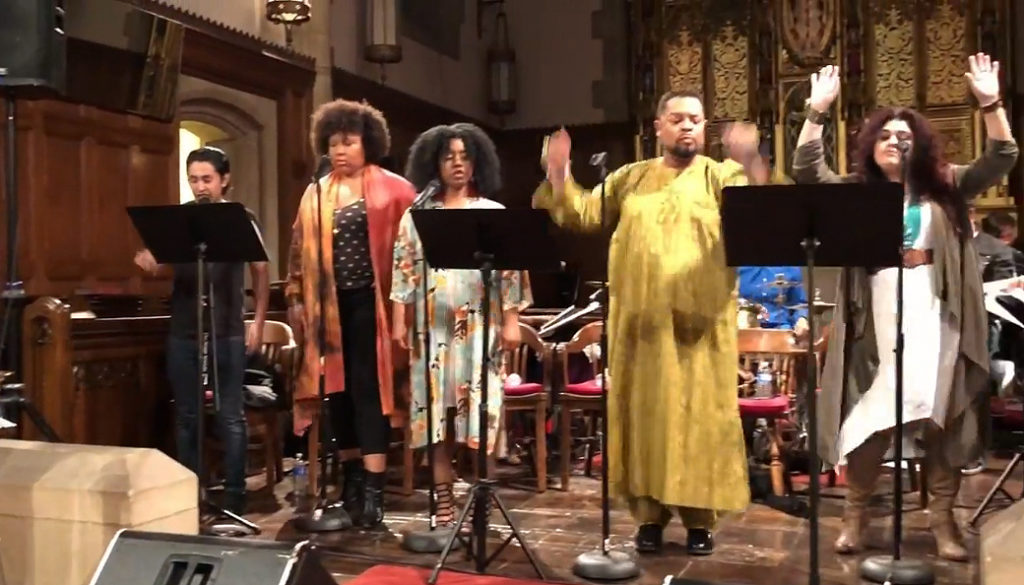 The Rev. Guy Leemhuis and the Enchanted Forest Band of Holy Faith Church in Inglewood performed “Glory,” popularized by rapper Common and musician John Legend, from the 2014 movie Selma.

The movie depicts the “Bloody Sunday” 1965 Selma to Montgomery civil rights march that galvanized public opinion against voter suppression tactics in the American South. Televised coverage of law enforcement beatings of marchers signaled a turning point in the struggle for racial justice, leading to passage of the Voting Rights Act, which President Lyndon B. Johnson signed into law August. 6, 1965. U. S. Congressman John Lewis, who died July 17 at the age of 80, suffered a fractured skull when he was beaten by law enforcement officers during that march across the Edmund Pettus Bridge. 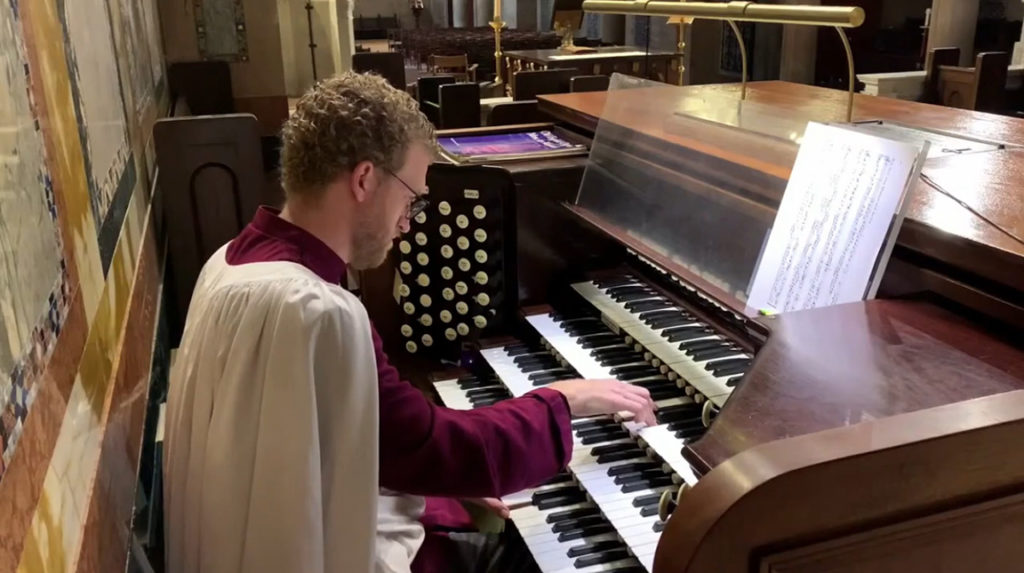 Zach Neufeld, organist at the cathedral, opened the service with an improvisation on “America the Beautiful” and “We Shall Overcome.”

Taylor: ‘lean into our freedom’

In a political season fraught with fallout from the Covid-19 pandemic, social and civil unrest over historic injustice, racial reckoning and voter suppression, Jesus’ teachings require “us to lean into our freedom — our freedom as people of faith and our hard-won freedom as citizens. These two freedoms are cut from the same cloth,” Taylor said.

“Both are gifts from a Creator who yearns to set the people free. Which brings me back to Jesus and voting. My faith in the birth, teachings, life, death, and Resurrection of Jesus Christ has as much to do with my freedom as my salvation. Whatever the circumstance or sadness, the limitation or loss, my faith makes me free.”

Voting is a gospel imperative, not a privilege, because whatever the government does, it does “in our name, with our sufferance and our taxes. So, Jesus’s proclamation of a kingdom of peace and justice requires more of us than thoughts and prayers. More even that outreach and advocacy.”

Voter suppression, “grieves the heart of God and desecrates the grave of every patriot who ever fought for freedom,” Taylor said. 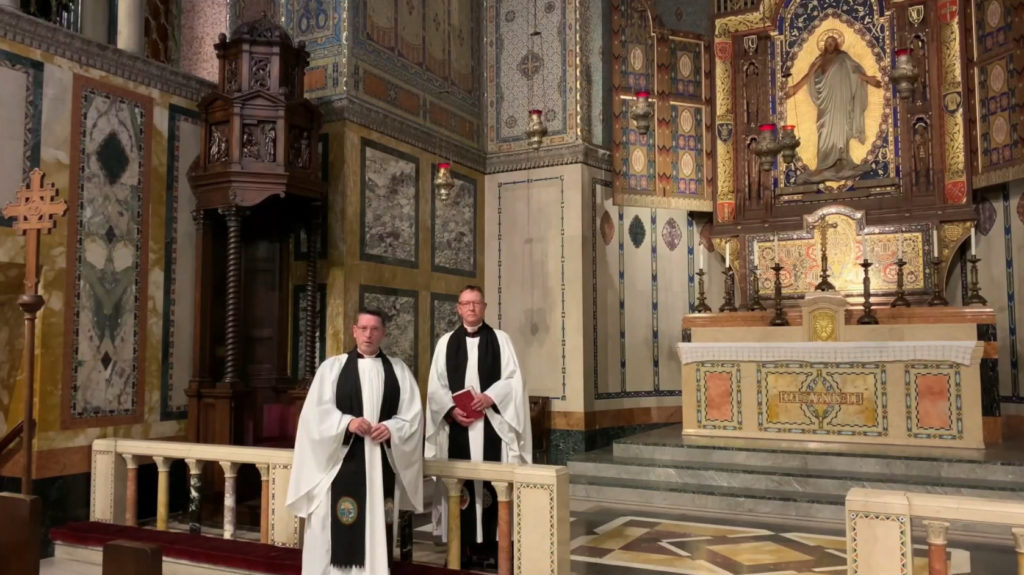 “Everyone — and especially the poor, the captives, and the oppressed, the ones he (Jesus) came to set free — should be free to express their hopes and fears to those in power. And yet in our system, like all systems, politics privileges the already privileged.”

While it took him merely six minutes to purchase a new computer online, voter suppression tactics have rendered voting so cumbersome as to discourage especially communities of color from exercising their constitutional right, he said. “Government has gotten away with under-serving people of color, the housing insecure, the hungry, the formerly incarcerated, the young, and the unpropertied.”

The Center for Public Integrity, along with Pew Charitable Trusts’ Stateline project, published an October 28, 2020 analysis of what prevents people from exercising their rights to vote and to equal representation.

The study included such barriers to the ballot box as: slowing down the U.S. mail; rushing the appointment of a Supreme Court justice; reducing the number of voting sites in communities of color; reducing allotted time for census data collection; and shortening the deadline to count mail in ballots.

Yet the current government’s “historic failures to protect the safety and security of the American people,” along with the pandemic’s stark images of disproportionate suffering, have inspired more than 75 million people—over half the 2016 turnout—to vote early, a “political and poetic irony,” Taylor said. 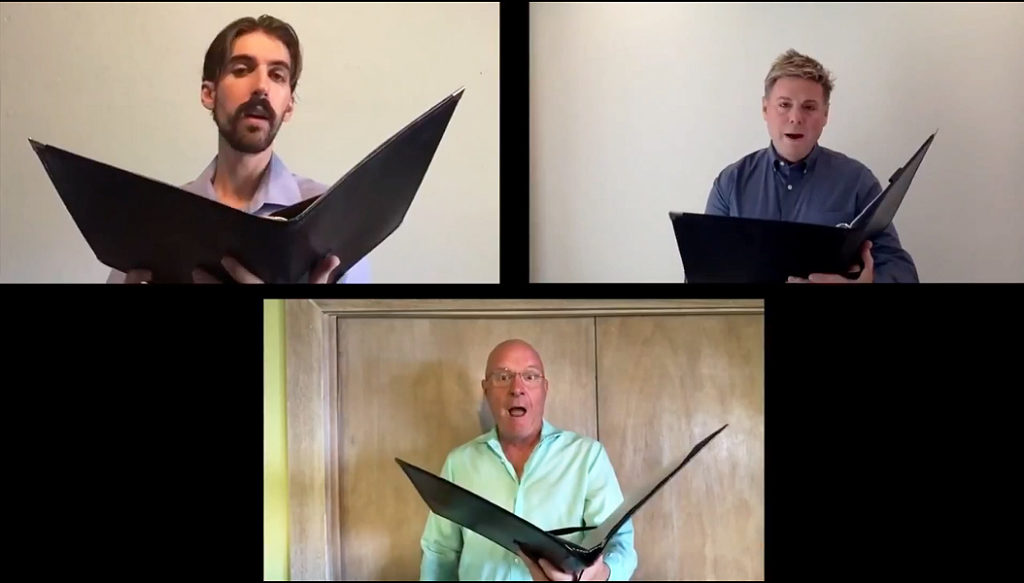 A trio from St. Augustine’s Church, Santa Monica, ends the service with “Kyrie.”

As Christians and citizens, “it should be our priority to ensure that every voice in our diverse national family is heard, every narrative included, in our national canon. If we’re all in this together, then we must leave no one behind.

“The more people vote, the more a civic spirit blows across the land that is akin to the Holy Spirit in its counseling, advocating, life-giving wisdom,” Taylor said. “So, let’s vote. Let’s urge others to vote.”

The challenge does not end there, however, he added. “Let’s petition our government at last to honor its covenant with the people, be a light to the nations, and do whatever it takes to streamline, simplify, and encourage voting for all.

“I hear America singing – in millions and millions of angry voices, loving voices, pleading voices. A freedom song, a justice song, a redemption song, a godly song. A song of hope that is loud enough and true enough to silence fear and set captive hearts free at last.”