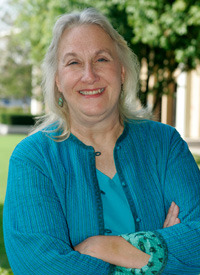 As the newly elected editor of Anglican and Episcopal History, the Rev. Sheryl Kujawa-Holbrook aims both to preserve and to make more accessible the rich traditions of the quarterly journal and the church she loves.

Kujawa-Holbrook, ordained a priest in 1985, describes herself as a “priest, scholar, theological educator and practical theologian.” The prolific author, Bloy House Anglican Studies and Religious Education professor, Claremont School of Theology vice president of academic affairs and dean of faculty seeks to shepherd “new voices … the next generation of church scholars, practitioners and interested readers.”

While serving as the AEH book review editor for the past decade, she recognized the need “to create new ways to support people so we have another generation of people prepared to research and teach and read about this wonderful tradition.” The AEH journal, a publication of the Historical Society of The Episcopal Church since 1932, typically offers a range of international, regional and local scholarly articles, and church and book reviews.

The Very Rev. Sylvia Sweeney, retired Bloy House dean and a member of the AEH editorial search committee, said Kujawa-Holbrook brings an exciting energy to the role along with the potential to strengthen the journal’s circulation and to broaden its reach.

“Sheryl is the perfect person for moving into the future,” Sweeney told The Episcopal News recently. “She has the kind of vision to help us look at what it means to be Episcopalian in a larger global Anglican context, and to speak specifically to the kinds of historical issues that will seriously frame our current lives and future life as Episcopalians.”

Kujawa-Holbrook literally “has contacts all over the world,” she added. “She brings a wealth of knowledge of the breadth of historical scholarship in The Episcopal Church. She’s going to be in a great position to help us hear from voices that need to be heard. It will be interesting to see what those new voices are going to be able to tell us about who we are in ways we weren’t necessarily attentive to before.”

For example, “what does it mean to be Episcopalian, from a Haitian perspective, or a member of the Central American community, or if you’re a Spanish-speaking Episcopalian?”

Utzinger, the Elliott Professor of Religion and chair of the Department of Religion at Hampden-Sydney College in Virginia, said, “Not only will she carry on the work of Ed Bond, our previous editor; her intent is to make sure that not only is the history of The Episcopal Church in the Anglican Communion communicated, but communicated with all of its voices.”

HSEC members “are teams of historians who are attempting to understand the place of The Episcopal Church and Anglican Communion in the history of Christianity,” whether they be academics or the person in the pew, Utzinger said.

“When we know where we’ve been, we have the ability to know where we want to go, and to look at the successes and tragedies of who we have been as the church.” The journal has a circulation of about 510, although it is also available through numerous databases, like the American Theological Library Association and EBSCO Host, a provider of research databases, e-journals, magazine subscriptions, ebooks and discovery service for academic libraries, public libraries and other institutions.

Kujawa-Holbrook brings expertise and energy but also “a willingness to create a complete tapestry of the history of the church,” he said. “The newest scholarship in the field is making sure there are voices, such as African American voices, women, LGBTQ, Latino voices, that have been part of the church for a long time and are now getting the due of their place and contributions.”

HSEC administrator Matthew Payne recalled serving with Kujawa-Holbrook “when she was youth ministries coordinator at the Episcopal Church Center in the late 1980s,” one of her many roles within The Episcopal Church.

“She comes with an amazing vitae or resume, both in the academic world, but also in broader disciplines. She has experience in working with people” that will benefit solicitation of articles and shepherding them through the editorial process.

Yet, Kujawa-Holbrook is extraordinarily humble, Payne said. “She has academic credentials, people credentials, religious credentials and yet, she took time to discern about this new role, to talk to other people about moving forward with it.”

In the field of 15 candidates for the role, “what stood out most about Sheryl is, she is crafting and working on a vision and direction she wants to see the journal become,” he said.

“Part of that vision and direction is, we need to not be in the mold of thinking that Anglican and Episcopal history is just about The Episcopal Church, but rather to have a much broader understanding of how Anglicanism intersects with the world and how the world intersects with it.”

Payne said a goal is to strengthen the journal’s circulation base, “to expand our membership to people, letting them know that if they have interests, they don’t have to have an academic interest or specific narrow interest. Anyone interested in history of The Episcopal Church should become members.”

Kujawa-Holbrook’s historical scholarship focuses on “Episcopal history, especially the history of women, and global Anglicanism, in particular Anglican spiritualities.” She has written at least 13 books and scores of articles, and edited and contributed to many more books, handbooks, educational curricula and book reviews. She is a fellow of the Royal British Academy and the recipient of numerous grants and many other distinguished professional honors and awards.

She has served The Episcopal Church as program director for ministries with young people (1995-1998), and as a youth ministries coordinator (1988-1998), and as youth missioner for the Province of New England (1985-1988) and for the Diocese of Massachusetts (1983-1988). Additionally, she has served congregations in New York City, and in the Massachusetts cities of Boston, Johnstown and Cambridge.

An advisor for The Episcopal Church Women’s History Project, she has also served on the faculties of numerous educational institutions from New York to California. She is a mentor for the Forum for Theological Exploration, or FTE, Young Scholars of Color Doctoral Fellowship project and was a 2018 member of the Presiding Bishop’s delegation to the United Nation’s Committee on the Status of Women.

Payne said the journal is seeking to strengthen existing partnerships and to forge new ones. “The journal also works with the archives of The Episcopal Church. The more we can get folks involved, the more the stories of our history can be shared to a broader audience.”

A successor to Kujawa-Holbrook as book review editor will be named at a later date.

Kujawa-Holbrook said she looks forward to working with retiring editor Edward Bond over the next two issues as she prepares to take the journal’s helm.

“I have a lot of respect for Ed Bond, and I look forward to continuing the quality that we’ve had,” she said.

“I think the goal of history is not limited to preserving our unique denominational heritage, but also to interpret it in an ongoing way with each generation,” Kujawa-Holbrook added. “Our Anglican/Episcopal heritage is a living tradition, and thus, it is integral for formation and ministry for us to have a sense of where we come from, to envision where we are in the present and the future. Our ancestors in the faith have much to offer us now, and in the future, and history is one of the ways we tap into that inheritance.”