For mission congregations, Clare Zabala Bangao is the one to call 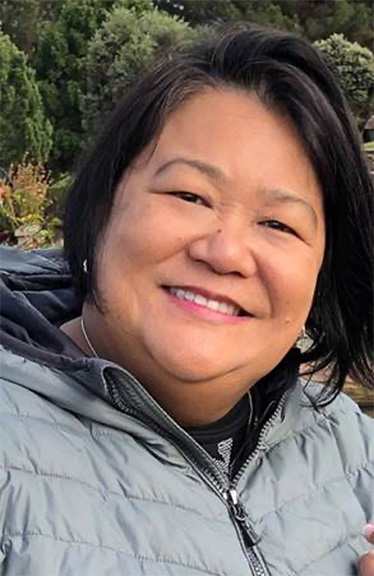 When the going gets tough for Southland mission congregations, administrators and vicars alike agree: “We call Clare.”

That would be Canon Clare Zabala Bangao, who shepherds, advocates, advises, supports, informs, encourages, guides and problem-solves for the 38 mission congregations and four mission centers in the six-county Episcopal Diocese of Los Angeles.

Bangao, who attends St. Mark’s Church, Upland, holds bachelor’s and master’s degrees from the University of the Philippines, and was named an honorary canon of the diocese in 2017 by then-Bishop J. Jon Bruno. She has been married to Joseph Benson Bangao, a registered nurse, since 2008.

“I love working with mission vicars and administrators,” she says. “It is both a passion and a blessing. It helps me grow as a person — those moments, when you are be able to help, just to listen, those are my many, many, many blessings in this job. It’s a job, but it’s also a blessing.”

The 4-foot-11-inch soft-spoken Bangao has felt like an oasis of calm and grace for Kayla Brock, St. James Church’s administrator. The Newport Beach church had just become a mission congregation when Brock was hired about two and a half years ago.

“I had never worked in The Episcopal Church and I wasn’t sure how it worked, or what my role was, or if the diocese would handle certain things or we would,” she said.

“Clare knows all the ins and outs. I can’t tell you how many times I’ve called her in a panic and, calmly, in her Clare kind of way, she’d say, ‘don’t worry’ and walked me through the process. For a while, it felt like I had a hotline to Clare. She was on my speed dial.”

More recently, when gathering documents to apply for Payroll Protection Program funds through the Coronavirus Aid, Relief and Economic Security or CARES Act felt overwhelming, “I’d say okay, what do I need, Clare? She’d list it out and make it seem a lot more doable,” Brock added. “She’s that calm, soothing voice that makes you feel like it’s all going to be okay. She’s a lifeline.”

Bishop Diocesan John Harvey Taylor said Bangao “has spent years on the front lines of mission, assisting, advising, and advocating for churches whose hearts brim with love of God and God’s people while relying on the financial support of those in our diocese who are more privileged.

“She knows by heart the way to every mission and the name of every vicar, warden, and treasurer. In ways too numerous to mention, she helps keep us together as a diocese and diocesan staff, especially during these quarantine times.”

While parishes typically choose their own rectors, Taylor, as bishop diocesan, is the rector of all mission congregations, and vicars serve them on his behalf. Bangao also serves on Taylor’s behalf as a support and liaison between the diocese and the mission congregations and centers, a role that requires flexibility, patience, wisdom and spiritual fortitude.

“From the first minute I met Clare, I knew I was in the presence of someone who loves Jesus, loves The Episcopal Church, and loves helping people,” Bishop Suffragan Diane M. Jardine Bruce recalled.

“She juggles so much at any given time – and is always smiling and laughing! Having had the privilege of spending time with her family in Sagada in the Philippines, I can tell you that she comes from a family who cares and shares the gifts God has given them. Few may know that Clare is also fluent in German! Clare is a great blessing to all—and has been such a great help to many!” 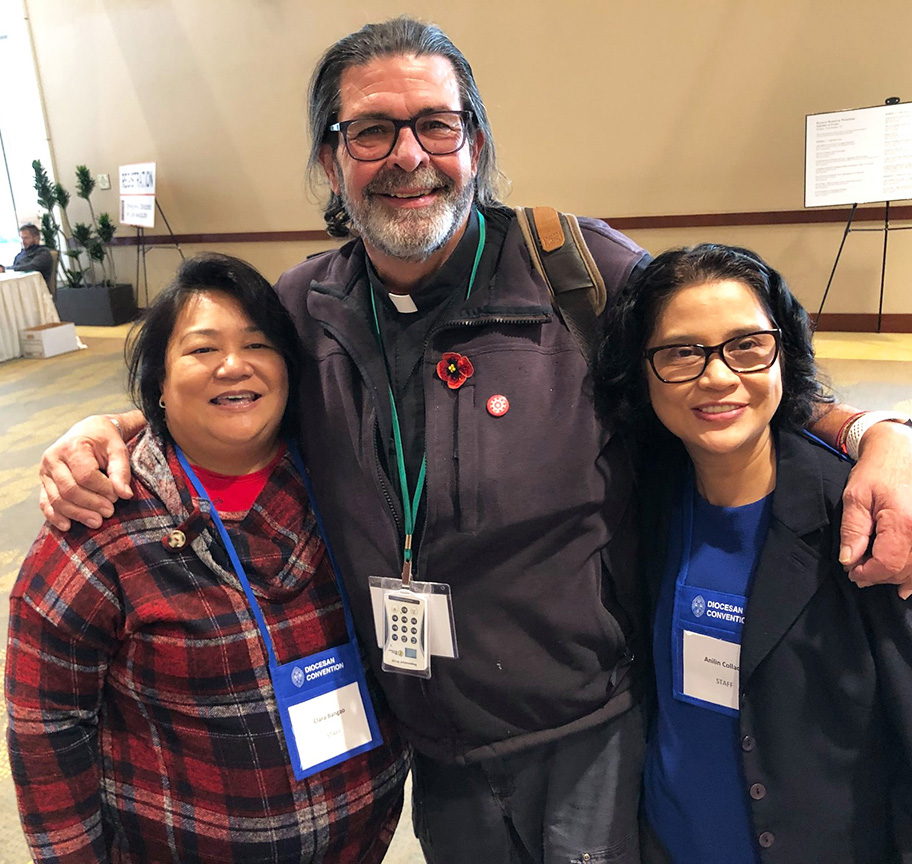 A heritage of ministry

Bangao’s deep spiritual fortitude comes naturally. She is the daughter of the Rt. Rev. Artemio Zabala, the first bishop of the Episcopal Diocese of North Central Philippines, who has also served as an assisting bishop in the Los Angeles diocese.

Her mother, Mary Zabala, a dentist, has also been a dedicated ministry partner with her father. Bangao was born in Upi Cotabato in the southern Philippines where her father served as priest at St. Francis of Assisi Church. She was named in honor of St. Clare of Assisi, Francis’s early follower and ministry partner who also founded a religious order.

Early formation came from Episcopal communities such as St. Andrew’s Seminary in Quezon City, Manila, where her father taught, to the University of Heidelberg in Germany where the family spent six years as he completed doctoral coursework, and where Bangao learned German. In 1993, they moved to Los Angeles.

A diocesan employee since 2000, she considered it “a temporary job because I had just finished a respiratory therapy program and was reviewing to take the board exams. But I fell in love with the work, with trying to help out as little and as much as I can. I saw that I could work in ministry and grow and so I stayed on.”

Bangao succeeded the Rev. Canon Michael Cunningham as coordinator for missions eight years later. The role ranges from facilitating the day-to-day nuts and bolts of church physical plant issues to spiritual support and encouragement for technicalities of completing grant applications, he said.

The role is supremely important because it mostly involves “being out among the people,” said Cunningham, now the rector of St. Mary’s, Lompoc. “Mission congregations are doing some of the most creative and diverse ministries. They are where Chinese ministry happens. They serve all kinds of people, in all kinds of languages and — the amount of stress created on all mission clergy — it’s hard work,” he said.

Bangao describes her role “as everything that involves the aspect of administration and organization in a mission congregation. What is common for the majority of mission congregations is that they do not have an administrator to help run the day-to-day operations of the church. I function as a support system for anything that comes up; that’s the beauty and the challenge of the job.”

In that regard, she also serves as a go-between for mission congregations with the diocesan human relations office, finance, the Office of Transition Ministry, and other entities. Mostly, she says, it is a ministry: “I’m grateful for all my colleagues that provide other resources because our work overlaps. I believe you cannot function if you don’t see the ministry in your work. That’s the basis for everything.” 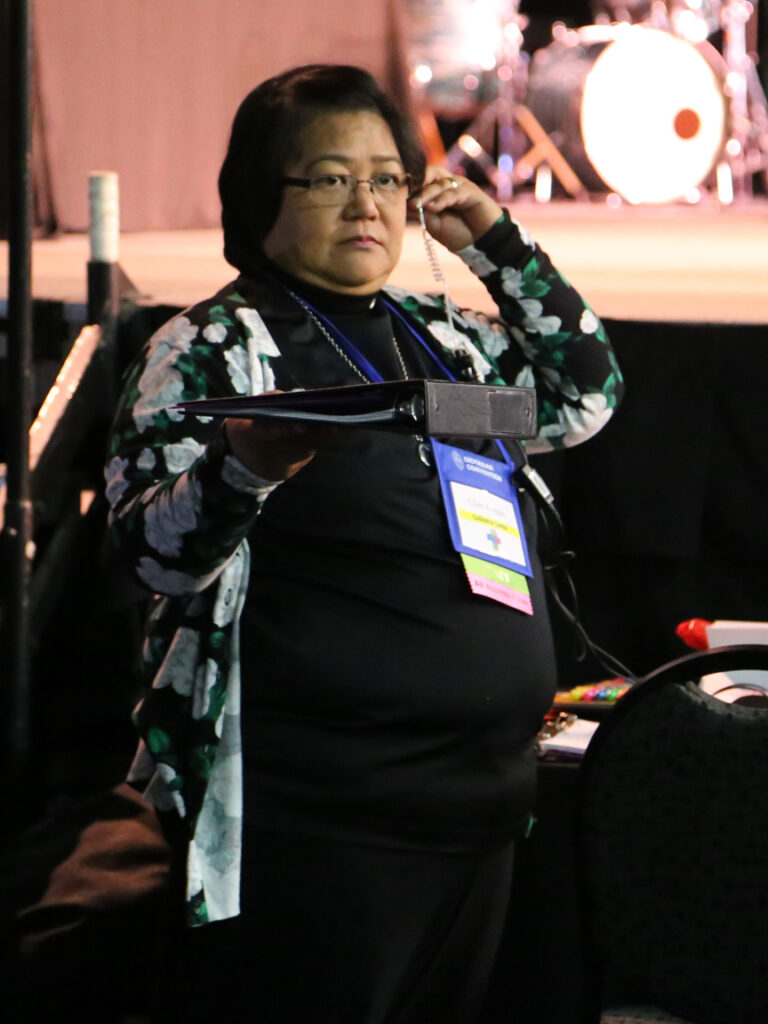 In addition to her responsibilities for mission congregations, Clare Bangao works in close cooperation with diocesan colleagues at events such as Diocesan Convention, including this meeting in 2017. Photo: Janet Kawamoto

Although Bangao’s responsibilities are huge, she offers a personal touch. “She is very caring for the needs of St. Thomas,” Chang said. “I feel like I always have a support behind me, a backup, and that makes me feel so blessed. She is like a sister. I want her to be there forever, as long as I’m a vicar.”

Similarly Rose Williams, St. George’s operations chief, said Bangao’s personal kindness eased the Laguna Hills church’s transition from parish to mission status several years ago. Bangao “really went above and beyond the call of duty. She helped us fill out all the right paperwork, which can be overwhelming,” Williams recalled.

“We appreciate her very much and the effort that she puts in to help the churches. I can’t imagine what her days are like. She has such a huge responsibility. We are lucky to have Clare as our advocate.”

The diocesan Program Group on Mission Congregations (PGMC) collaborates with Bangao, including reviewing yearly grant applications for financial assistance to mission congregations, according to the Rev. Canon Kelli-Grace Kurtz, chair.

Similarly, Dan Valdez, a business management consultant who frequently collaborates about missions with Bangao, called her “an incredibly fierce advocate” whose dedication to the task often translates into early mornings, late evenings and dropping whatever she is doing to visit congregations requesting her help.

“She has intimate knowledge of each congregation, its history, people and challenges, as well as appropriate resources,” he added. “Two weeks ago, a parish rector was looking for information. He reached out to me and to Clare for a reference on building issues, to comply with city permitting. Before I could finish reading the email — and I got to it pretty quickly — she had already replied with the information.”

The Very Rev. Bill Dunn is dean of Deanery 7, which includes a dozen mission congregations, and is also vicar of St. Stephen’s, Beaumont. He said Bangao provided essential expertise when assisting St. Stephen’s in drafting a proposal for purchase of an adjacent property. “We’ve never done anything like that before, and we didn’t have a clue about who our audience is, what kind of information you have to go about pulling together,” Dunn told The Episcopal News. “We don’t have the depth of staff, the money, the expertise, to be able to do something like that on our own.”

In a diocese as expansive and diverse as Los Angeles, Bangao is a welcome shoulder, a good listener, even “a confessor,” he added.

“Clare is someone that I can talk to as a mission vicar and as a dean,” says Dunn. “That’s really, really big, because you can’t do this work, and not have times when you need to talk to somebody who really knows what you’re going through and who can be practical when she needs to be practical.

“Who does the dean go to when they don’t know the answer? The dean goes to Clare. If mission clergy didn’t have Clare, it would be very, very difficult.”