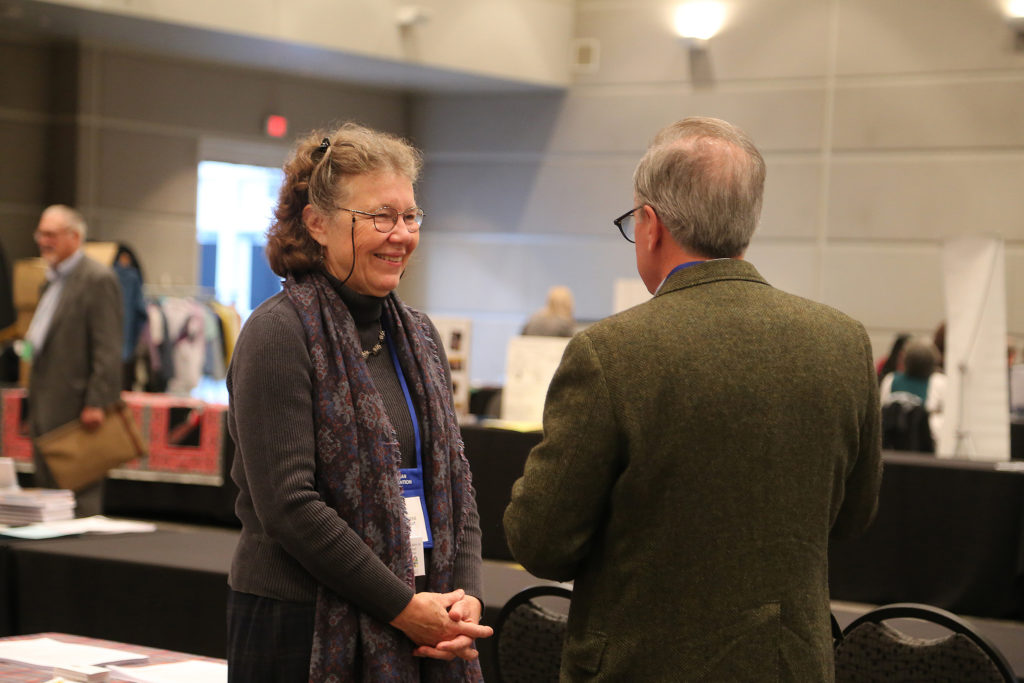 Canon Serena Beeks, executive director of the diocese’s Commission on Schools, staffs the commission’s booth in the exhibit hall during Diocesan Convention in 2018. Photo: Janet Kawamoto

“Serena is the queen of regulations, of licensing for schools,” says the Rev. Betsy Hooper-Rosebrook, chaplain at St. Mark’s School in Altadena. “There is very specific and detailed licensing … it is incredibly complex and kind of terrifying. Serena soothes those fears and walks us through whatever the questions may be.”

State childcare licensing requirements – to which all preschools must adhere – are contained in a binder “as thick as the Oxford English Dictionary – unabridged,” Beeks said with characteristic humor. “I don’t know them all. I say, ‘Check with licensing,’ but I say it with queenly authority.”

Beeks’ position as executive director – which she has held twice, from 1998 to 2000, and again from 2009 to the present – is more advisory than superintendent. She offers resources, encouragement, support and is a liaison between Diocesan Bishop John Harvey Taylor and some 31 schools in the six-county diocesan area.

“Serena brings an expert’s insight and a pastor’s sensibility to her work on behalf of our diocesan Episcopal schools, which comprise a leading evangelical edge of The Episcopal Church in the 21st century,” Taylor told The Episcopal News. “Especially during the pandemic, she has been ringleader, cheerleader, and servant leader, assisting our educators with their unique challenges. We also love her for her many kindnesses to us, her St. Paul’s Commons family.”

Bishop Suffragan Diane M. Jardine Bruce agreed. “Serena is a teacher, coach, advocate and friend to so many. Her connection to our schools and her wisdom in guiding those who are thinking about starting a school is invaluable! Her love of Haiti and her dedication to the people in the Episcopal Church and their schools there has been a model of cooperation and collaboration. She is wise and wonderful, and I am grateful to be able to work with her.”

Beeks was born in Italy where her father was in medical school and her mother was employed by the Food and Agriculture Organization of the United Nations in Rome. The family moved to Mariposa, near Yosemite, California, when she was young. A graduate of the University of California at Berkeley with a bachelor’s degree in music, she also holds a master of arts degree and teaching credential from the Claremont Graduate School, and a doctor of ministry degree from Virginia Theological Seminary. She is married to Graydon Beeks, a retired Pomona College professor, music historian and choir director. She is a member of St. Mark’s Church in Upland, where she sings in the choir.

Merrily Dunlap, Beeks’ predecessor at the diocese, called the executive director’s role both a pastoral and problem-solving one. At times, she has accompanied Beeks on school site visits. “We call ourselves the Thelma and Louise of Episcopal schools,” she recalled.

The role of schools in building faith can be under-appreciated, Dunlap added. “For our schools, the philosophy is all-encompassing, like our churches – reaching out and loving people, whatever path they’re on. You really become the church for people. When there’s a death or terrible accident, the school community steps in and becomes the church for those families. There was always a role of deepening the faith, whatever the family’s faith was, and we had Christian, Muslim and Jewish families.”

Beeks also offers support and resources to schools and programs with Episcopal connections, like the Doris Dann Kids Campus at the Our Saviour Center in El Monte, which hosts an after-school enrichment program for underserved children. She has expanded the role to assist with the Diocese of San Diego’s two schools and ten preschools in an experimental collaborative relationship.

Internationally, she has facilitated partnerships between schools in the U.S. and Haiti since 1999 – a labor of love, according to the Rev. Roger Bowen, who originally recruited Beeks to assist in the effort.

The Episcopal Diocese of Haiti encompasses nearly 90,000 members and operates 270 schools, which also function as churches, and health and community centers. It is the largest diocese in the church, and one of the most challenged financially. There are an estimated 70 partnerships with U.S. schools, Bowen said.

Such partnerships – which generally involve life-changing pilgrimages to get to know Haitian counterparts – “advance the entire school community … to understand at a heart level what the beloved community is all about,” he said. “The goal – and Serena really emphasizes this – is to go and sit with folks, to try to understand their lives, their struggles and successes, fears and joys.” 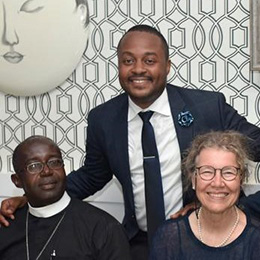 Canon Serena Beeks poses with her friends the Rev. Walin Decamps and Dr. Kenloo Desormeaux at a celebration of the latter’s graduation from medical school in Haiti. Beeks has been a mentor to Desormeaux for some 20 years. Photo courtesy of Serena Beeks

St. Mark’s School in Altadena has partnered with Sainte Marguerite in the remote mountains of La Tournelle, several hours by car from the capital city Port-au-Prince, for a little more than a decade, Hooper-Rosebrook said. Together, they also partner with St. Mark’s High School in Southborough, Massachusetts.

“When we go there and for the people who go, it’s transforming,” Hooper-Rosebrook said. The creativity, resiliency and deep faith of the Haitian people, are among the lessons learned and brought back, as well as knowledge of “the history of a strong country, that has borne the brunt of so much discrimination and deprivation,” she said. “It’s an eye-opener. Serena has helped us with making sense of what we’ve seen, learned and experienced. She is so much fun. She just carries laughter and joy with her.”

The Rev. Kristin Barberia recalled a gentle nudge from Beeks that redirected her vocation. “I was lucky to have Serena close at hand while she was serving as an interim Lower School principal at St. James’ (Wilshire) School, where my children attended. Seeing me struggling to find balance between my vocation as a clergy person versus my vocation as a parent, she inquired, “Have you ever thought about serving as a school chaplain?”

Now a school chaplain at St. Matthew’s, Barberia said Beeks has also helped nurture a thriving Haitian partnership for the Pacific Palisades school. “Personally, professionally, spiritually – I have been so deeply blessed by having Serena Beeks in my life and in the lives of our schools!”

The Rev. Karri Backer, former head of St. Mark’s School in Upland, has also witnessed Beeks’ love affair with the Caribbean country and that diocese’s impressive partnerships. “We saw clinics that were an oasis, literally and spiritually, in the middle of dry places. We had visited communities without schools and engaged in hopeful conversations about future partners that would help to facilitate their dream of being able to offer education for their children and employment for their adults.”

Those partnerships have been temporarily sidelined by the Covid-19 pandemic. The pandemic initially forced Southland schools to move coursework online. Most have reopened for in-person classes, with reduced participation. Others have closed permanently.

St. Mark’s School in Upland – founded by Beeks in 1982 – shuttered K-8 classes but has continued to operate a preschool. “We had a couple of schools that closed during the time of the pandemic; it just was very expensive to run a school. It was an unanticipated threat that they just couldn’t meet. But both places have maintained preschools. And those preschools are hanging in there,” she said. “Nobody expects to have to completely change the way you operate for an entire year.”

Backer recalled Beeks’ support during those challenging times. “She was very encouraging till the last minute, trying to help us find a way to make it work,” Backer recalled. “She was always available for us and it felt like she did literally everything she could. The whole time, I could call her at any moment, and she would be there.”

Marie Ostrowski, director of the Arcadia Episcopal Preschool for 21 years, said, “During Covid, we were all worried. Serena was helping us gather info about reopening and closing schools and had all this great info she was pulling together, helping directors. She has been awesome.”

The preschool closed in April 2020 and reopened in June. Through the pandemic, Beeks has “been like that shining light,” she said. The pandemic “has really changed the way we teach children,” said Ostrowski. We’ve revised teaching methods and we’re trying to add more that seem acceptable, yet safe and healthy. It’s been difficult.”

Beeks keeps the schools connected, Ostrowski added. “I feel like I’m on an island alone sometimes here in Arcadia. She’s such a valuable resource, she gives guidance about the law, she creates connections, provides info about grants and resources.”

“The configurations vary greatly,” said Beeks. The populations they serve are very different, depending on locations, and they are all over the diocese, from Santa Barbara County in the north to the Orange County itself and out to Riverside and San Bernardino counties.”

Even with pandemic-related assistance like the payroll protection program, schools have struggled. “Preschool is especially a struggle because they were able to open again right away to provide daycare for essential workers, but not everybody came back,” she said. “So, they had to either reduce staff hours or reduce staff. It was very difficult because preschools really function as a family, with everybody working together. To cut teachers from a preschool is brutally hard to do.”

While teachers have “done a fabulous job” adapting to online education, they have been stretched thin during the pandemic, she said. Support from the diocesan community, in the form of prayers, notes, Starbucks gift cards, or even financial aid, would be much appreciated.

“I hope that the diocese is proud of its schools,” she added. “The schools and preschools in the Diocese of Los Angeles are extremely varied, very diverse, and, and serve a multitude of students who might not otherwise have contact with any kind of a religious community.”