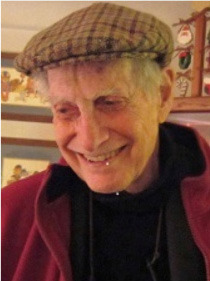 The Rev. Clarke K. Oler – longtime parish associate of All Saints Church, Pasadena, and a former rector of All Saints, Beverly Hills – died April 6 at age 89 after several years of declining health.

A celebration of Oler’s life is planned for 2 p.m. on Saturday, June 13, at All Saints Church, 132 N. Euclid Ave., Pasadena, where he had served from 1981 to 1989 as a parish associate and in various assisting capacities thereafter while in practice as a psychotherapist. Survivors include his daughter, Ellen, and two sons, John and Kim, and their families. Oler is predeceased by his wife, Wendy.

Clarke Kimberly Oler was born November 14, 1925, in Brightwaters, N.Y., to Wesley and Imogene Oler. He served in the U.S. Army in the Pacific theater during World War II and married Wendy Salmond in 1951. Oler was graduated from Yale with a bachelor’s degree in 1949 and from Virginia Theological Seminary in 1956 prior to his ordination that same year in the Diocese of New York. His early ministry included assisting at St. John’s Church, Youngstown, Ohio, before serving from 1962 to 1975 as rector of the Church of the Holy Trinity in New York City. In 1975 he began work as rector of All Saints, Beverly Hills, serving until 1981 and continuing his education for licensing as a marriage, family, child counselor.

In Pasadena, Oler brought leadership to various parish ministries, including formation of the Covenant program for seekers and new members of All Saints Church. His notable sermon “Children of the Atomic Bomb” was preached August 6, 1995, on the 50th anniversary of the bombing of Hiroshima and Nagasaki. Oler’s book, God Is in the Darkness: Finding Faith in Troubled Times, was published in 2006. Oler’s son Kim, a composer of theatrical and spiritual music, is also well known to the Pasadena parish community and beyond for his works including “Peace on Earth” and “Blue Green Hills of Earth,” the latter invoking perspectives of Apollo astronauts.