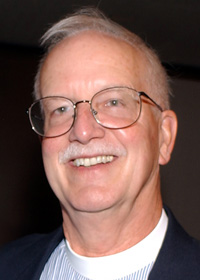 The Rev. David Charles Walker — priest, chaplain, organist and composer — died Dec. 3. He served as chaplain and director of pastoral care at Good Samaritan Hospital 1991 – 2003; previously he served a congregations in San Diego, Beverly Hills, and Brooklyn New York. He composed two hymn tunes included in Hymnal 1982: “General Seminary,” with the text “King of Glory, King of Peace” by George Herbert (Hymn 382), and “Point Loma,” with the text “Baptized in water” (Hymn 294).

Survivors include Walker’s husband, Nam Nguyen; a sister, a niece, and other family members.

Walker was predeceased by his previous life partner, David John Falconer, who in 1994 died at the scene of an armed robbery in the Los Feliz section of Los Angeles. Falconer had served with distinction as organist-choirmaster of St. James’ Church and School, Los Angeles, where the historic 1911 Murray Harris Organ was thereafter renovated and named in his memory in 1995.

Walker was born in Washington, D.C. on March 17, 1938. He majored in organ and harpsichord at Illinois’ Wesleyan College and earned his bachelor’s degree in music in 1960. He attended the Union Theological Seminary in New York, earning a master of sacred music degree in 1965. He was ordained to the diaconate in June 1973 by Bishop Paul Moore, and to the priesthood in May 1974 by Bishop Ned Cole after earning his master of divinity degree from GTS.

After serving three years on the GTS faculty, he moved to parish life, becoming rector of St. Philip’s, Dyker Heights-Brooklyn, and served in that capacity for the next four years. in 1980 he moved to San Diego to become associate rector at All Souls’ Church. Five years later, he began his local ministry as associate for worship and pastoral care at All Saints, Beverly Hills.

Walker became interim priest-in-charge at St. Luke’s, Monrovia, in 1990 before moving to Good Samaritan Hospital, by then a century-old diocesan institution, where he served as chaplain and director of pastoral care until his retirement. He and Nguyen moved to Las Vegas, returning some years later to live in Long Beach. They were married on Feb. 11, 2015.

“It was all just part of my personal journey, to serve in a variety of facets of ministry and I enjoyed all of it,” Walker told The Episcopal News after his 2003 retirement from Good Sam.

Of his time at GTS, he said, “Every day became an adventure. That was around the time the new prayer book was coming out. There was no music for the new texts. The psalms were hard to set to music. I’d set a chant and everyone would break up laughing because some texts read well but don’t sing well. I had to invent nearly everything we used.”

Reporting by Pat McCaughan, from The Episcopal News, Summer 2003