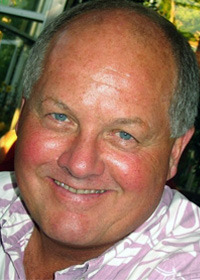 The Rev. David Stuart Maurer, retired co-vicar of St. Clare of Assisi Church, Rancho Cucamonga, died Jan. 4 as the result of a brain hemorrhage. He was 64.

Survivors include the Rev. Karen Maurer, to whom he was married for nearly 40 years and who served as his co-vicar at St. Clare’s; their daughter, Gretchen Killebrew, and her husband, Mark; their son, Michael Maurer; their grandchildren, Kye, Kalena, Ella Killebrew and Vivienne Maurer; brothers Stephen Maurer and Larry Maurer, and many nieces, nephews and cousins.

A celebration of Maurer’s life will be held at 3 p.m. on Saturday, February 6 at St. Wilfrid’s Church, 18631 Chapel Lane, Huntington Beach 92646 (714.962.7512). Casual “aloha” dress; attendees are invited to wear their ceramic Cursillo crosses if they have them, and join family and friends for cigars on the patio during the reception after the service.

Maurer was vicar of St Luke’s Church, Fontana from 2007 to 2010; he and Karen served at St. Clare’s beginning in 2008. David retired in 2014 due to the onset of Alzheimer’s. The couple then attended St. Wilfrid of York Church, Huntington Beach, where he continued to assist at Eucharist until very recently.

Before he and Karen were ordained to the diaconate in 2007 and the priesthood in 2008, Maurer was an athletic trainer at USC (1974 – 1980) and then worked as a physical therapist until 2004, when he and Karen entered seminary at Trinity Episcopal School for Ministry. He was active in Cursillo from 1987 to 2011, and served as senior warden at various times at St. Clement’s by-the-Sea, San Clemente, and Emmanuel Church, Fullerton

Born March 23, 1951, Maurer was raised in Fullerton and was a member of Church of the Blessed Sacrament, Placentia. He earned a bachelor’s degree at Cal State Northridge, certification at Children’s Hospital School of Physical Therapy (now the Chapman University PT program), and a master of divinity degree at Trinity School for Ministry.

“Dave was incredibly kind, compassionate, funny, hard-working, athletic, a great cook, bass and guitar player, devoted to God, family and friends,” Karen Maurer wrote in a biographical sketch. “He will be deeply missed.” At the family’s request, memorial donations may be made to the Alzheimer’s Association of Orange County or to Episcopal Cursillo of Los Angeles.