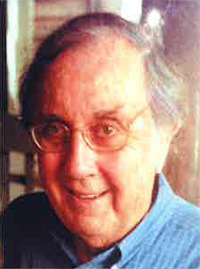 Canon Edmonde A. Haddad, former executive director of the Los Angeles World Affairs Council, member of St. Bede’s Church, Los Angeles, and longtime member of the Program Group on Communications & Public Affairs and the editorial board of The Episcopal News, died on May 7. He was 83.

From 1973 to 1987, Haddad was executive director of the Los Angeles World Affairs Council. In that role he welcomed speakers from all over the world — politicians, writers, clergy (including then-Archbishop of Canterbury Robert A.K. Runcie), heads of state and royalty — and skillfully moderated lively and often contentious question-and-answer sessions. He took some time off from his World Affairs Council work to serve as a deputy assistant secretary of state for public diplomacy during the 1980s.

A lifelong member of the Episcopal Church, Haddad served for many years on the Program Group on Communications, as well as the Episcopal News editorial board as member and chair. Using the skills and connections he forged in his radio days, he produced during the 1970s a series of public service radio spots for the diocese. The Haddads were at various times active members at St. David’s Church, North Hollywood (now closed); St. Paul’s Church, Ventura; St. Michael & All Angels Church, Studio City; and St. Bede’s. In 2004, Bishop J. Jon Bruno named Ed Haddad an honorary canon of the Cathedral Center.

Edmonde Haddad was born on July 25, 1931 in Los Angeles and grew up in the Hollywood Hills. A graduate of Hollywood High School, he served in the Air Force during the Korean War. Afterwards he earned a bachelor’s degree in telecommunications from the University of Southern California and a master’s degree in public law and government affairs from Columbia University. During his time a Columbia, he received a CBS fellowship, and worked in the network’s newsroom during the days of Edward R. Murrow.

Returning to Los Angeles, Haddad was for 12 years a reporter and anchorman on KPOL radio, handling news stories, interview and commentary. He won two Golden Mike awards for outstanding news coverage from the Radio & Television New Association of Southern California for reports on the Watts riots in 1965 and the subsequent rebuilding of Watts. The American Political Science Association also honored him for distinguished reporting.

Haddad frequently contributed opinion articles to various newspapers. Until his health began to fail in recent years he retained his lifelong interest in international, national and local matters, and often served as moderator or panelist at forums on public affairs. He was a member of PEN, the organization for writers, and was the author of Look to the Rainbow, a book of political and social commentary expressed in poetry. He served on Governor Gray Davis’ Commission on Hate Crimes, a nine-member panel chaired by former Secretary of State Warren Christopher and former California Governor George Deukmejian.