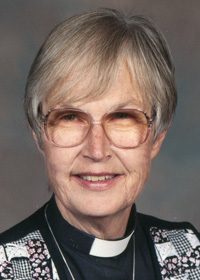 The Rev. Elizabeth Stingley, retired vicar of St. Hilary’s Church, Hesperia, died June 18 in Texas, where she had been living with her daughter. She was 80.

Service details are pending; interment will be at Arlington National Cemetery with her husband Patrick Stingley, a career Marine officer who died in 2004 after 48 years of marriage. Survivors include their daughter Kathleen and their son Patrick.

“Father Liz” Stingley served at St. Hilary’s from 1992 to 2009; previously she assisted at St. Paul’s, Lancaster. She also was a chaplain at Antelope Valley Hospital and Medical Center and later at Victor Valley Global Medical Center in Victorville.

Born June 1, 1938 in Los Angeles, she attended UCLA where she met her husband. Together they followed Patrrick’s military career, living in Barstow and Twentynine Palms, California; Philadelphia and Mechanicsburg, Pennsylvania; well as Pearl Harbor, Hawaii; and Monterey, California. Liz earned a bachelor’s degree in music education at Labanon Valley College in Annville, Pennsylvania. She taught music in public schools and was an organist, choir director and handbell choir director for a Lutheran church and a synagogue.

After the family returned to California, Liz earned a master of divinity degree at CDSP. She was ordained to the diaconate in June 1990 and to the priesthood the following January by Bishop Frederick H. Borsch.