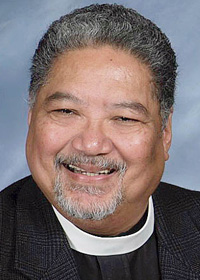 The Rev. Floyd “Butch” Naters Gamarra, former multicultural minister for the Diocese of Los Angeles, died in his sleep at his Pasadena home on May 16 after a recent period of illness.

Survivors include his four daughters, Gugui, Lizzie, Linda, and Katalina, and his son, Jonathan.

Bishop Suffragan Diane Jardine Bruce will preside at Requiem Eucharist set for 2 p.m. on Friday, June 3, at St. Mary’s Church, 961 S. Mariposa Ave., in the Koreatown section of Los Angeles, the parish in which Gamarra assisted from 2007-2012. During these years he served a term on the denomination-wide Executive Council of the Episcopal Church, and also provided leadership in Province VIII as convener of ethnic ministries.

Previously, from 2003 to 2006, Gamarra was priest-in-charge of St. Philip the Evangelist Church, Los Angeles, having served the Diocese of Los Angeles as missioner for multicultural ministries from 1999 to 2003. Butch came to that work after ministry in congregations in Boston, Philadelphia, Manhattanville (New York City), White Plains (N.Y.), and his native Panama.

“I was born and educated in Panamá, went to seminary in Puerto Rico and after 13 years of ministry came to the United States in 1979 as a missionary to the Diocese of New York,” Butch wrote in an account of his faith story. “I was baptized in the Roman Catholic Church and became an Episcopalian at the age of 10 years. I am completely bilingual, bicultural and multiracial. I am one half Chinese, part Guyami (one of the native peoples of Panamá), part African, and part Caucasian.

“Music and playing the guitar are favorite hobbies of mine,” he continued. “I write poems and songs even though I do not read music. I was an accomplished player of baseball and am still an avid fan of the game. I love to work with God’s people regardless of race, color, culture, age, class, gender, and sexual orientation, religious or ethnic background.”

Gamarra added that he saw part of his vocation as a “bridge person.” He applied this mission to his work as a two-time deputy to General Convention, board member of the National Episcopal Urban Caucus, and contributing editor to The Witness magazine, among other ministries.

Announcing Gamarra’s death to the clergy of the diocese, Bishop J. Jon Bruno wrote, “Through his compassion and pastoral care, his advocacy for justice, his compelling preaching and life of faith, Butch will long be remembered and appreciated.”