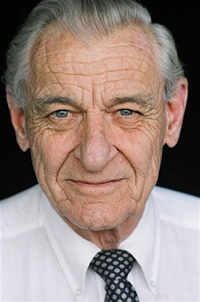 The Rev. Canon George William Cummings, former secretary of convention, executive director of The Episcopal Home (The Kensington) and rector of The Church of Our Saviour, San Gabriel, died Oct. 13. He was 87.

Cummings became executive director of The Episcopal Home in Alhambra in 1972, after a year as assistant and eight years as rector of Church of Our Saviour. During his 29-year tenure at the Home (later renamed The Kensington), George oversaw the development and construction of the Canterbury in Palos Verdes Estates, and the initial design of the Covington in Aliso Viejo.

In 1984 he became an assistant secretary of convention, and in 1987 was elected secretary, a post he held until 2006.

Previously he was an assistant at St. Francis’ Church, Palos Verdes Estates. He served on many diocesan committees and boards, including Diocesan Council, the board of the Cathedral Corporation, and the Program Group on Stewardship & Finance. Bishop Fred Borsch named him an honorary canon of the Cathedral Center in 1993.

The son of an Episcopal priest, George Cummings was born March 25, 1927 in Brooklyn, New York, the third of four children. He spent a year at Lehigh University in Bethlehem, Pennsylvania, before entering the Naval Academy in Annapolis, Maryland. After his 1949 graduation, he served as a Korean War Navy aviator. In 1955 he resigned his commission as a lieutenant commander and a naval flight instructor, enlisted in the naval reserves and went to work for the Douglas Aircraft Company’s El Segundo plant. While there, he was involved in the atomic bomb testing programs in Nevada and the Eniwetok Atoll in the South Pacific.

He earned a master of divinity degree at Church Divinity School of the Pacific (CDSP) in 1961, and was ordained to the diaconate on Sept. 7, 1961 and to the priesthood on March 1, 1962 by Bishop F. Eric Bloy.

An accomplished craftsman, Cummings made furniture and carved birds in wood and bone. He built his own 3,000-square-foot home in San Marino, and was a licensed general contractor, electrician and plumber, as well as an avid gardener. He enjoyed sailing, sometimes took the lead in community theater, and liked to quote writers such as British Romantic poet and playwright Percy Bysshe Shelley, American poet Williams Wadsworth Longfellow and early 20th-century Canadian poet Robert Service.

He was the author of two books: Whatever Happened to Levi? (2002) and Understanding the Message (2007), both published by the Cathedral Center Press.