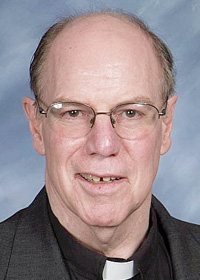 The Rev. Canon Howard J. Happ, Ph.D, a priest of the Diocese of Los Angeles for nearly 40 years and a distinguished professor of religious studies, died March 27 at the Canterbury Episcopal Home Community in Rancho Palos Verdes, where he was a resident. He died peacefully in his sleep; he was 68 and will be remembered for his great friendship, intellect, wit, and commitment to the Anglo-Catholic tradition.

Happ is survived by friends, colleagues and students. Requiem Eucharist is scheduled for Sunday, April 3, at 5:30 p.m. — preceded by visitation at 4:30 p.m. — at St. Nicholas Church, Encino. Clergy are invited to vest (white stoles) and process. Burial will follow in the family plot in Waterloo, Iowa. Happ was born in Fort Dodge, Iowa, on May 20, 1942.

Since 1979, Happ was professor of religious studies at California State University, Northridge. Previously at CSUN he was an associate professor for four years and an assistant professor from 1971 to 1975.

Happ assisted at St. Nicholas’ Church, Encino, for some 20 years starting in 1978. He was curate of St. Charles’ Mission, Northridge, from 1973 to 1976, and then assisted at St. Andrew & St. Charles, Granada Hills, from 1977 to 1983. In 1996 he began assisting at St. Bede’s Church, Los Angeles, continuing until his retirement. Starting in 2000, he served at St. Martin in-the-Fields Church, Winnetka, and also occasionally at the Cathedral Center, of which he was named an honorary canon in 2006. Most recently, he had assisted and preached at St. Francis’ Church, Palos Verdes Estates, and at St. Nicholas’, Encino.

Bishop Robert Rusack ordained Happ to the diaconate in 1973 and the priesthood in 1974. Happ held an A.B. from Cornell College in Iowa, an M.A. from the University of Chicago, a B.D. from Princeton Theological Seminary, and M.A. and Ph.D. degrees from Princeton University.

He is the author of numerous theological articles, as well as a chapter in the diocesan centennial history, As We Remember.