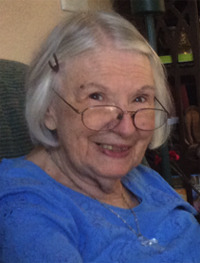 Most recently the couple lived in Corona, where Dick Belliss assists at St. John’s Church.

The Rev. Canon John Saville will preside and Dick Belliss will preach at a funeral service at 10 a.m. on Saturday, May 30 at St. John’s Church, 526 E. Magnolia, Corona.

During Dick Belliss’ tenure in Riverside (1969 – 1994), Joan Belliss was director of the Suicide Prevention Hotline of the Volunteer Center of Riverside County. During their ministry at St. Anselm’s (1958 – 1969), she founded the Community Nursery for low-income families. They also served for two years at St. Cross Church, Hermosa Beach, during which time Dick Belliss was ordained to the diaconate and then to the priesthood.

Joan Floyd was born Dec. 7, 1932 in Los Angeles. She attended Fillmore High School, then Whittier College, where she earned a bachelor’s degree with honors in 1954. She married Belliss, also a Whittier graduate, on Aug. 27, 1954. After Dick Belliss’ retirement in 1994, they retired in Santa Clarita, where he assisted at St. Stephen’s Church, thereafter moving to Corona.