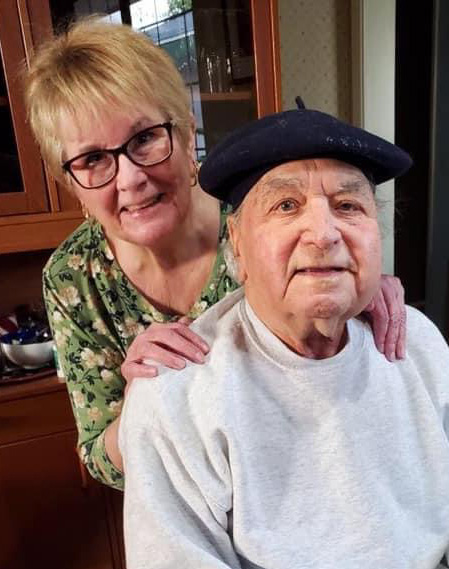 John Fuller is pictured at a recent family celebration with his wife, Jarrel. Photo: Jennifer Estes

The Rev. John Paul Fuller died July 15 in hospice care at his home in Oxnard, where he served from 1971 to 1991 as rector of All Saints Church. He was 91, and had been in failing health for several years.

A service will be held at 9 a.m. on Saturday, July 31 at All Saints Church, 144 S. C Street, Oxnard. The Rev. Melissa Campbell-Langdell, rector, and the Rev. Larry Brown, rector of Trinity Church, Fillmore, will jointly preside.

Survivors include Fuller’s wife of 27 years, Jarrel; his two daughters, Marianne and Marissa, and son Michael from his first marriage; stepdaughter Jennifer Estes; grandchildren Trevor and Daniele Sala and Bryce and Courtney Trevett; and step-grandson Brendan. Fuller’s first wife, Marcia Jeanne Shance, died in 1993. He also was predeceased by their son Jonathan.

During his 20-year tenure at All Saints Church (1971 – 1991), Fuller worked to establish a parish endowment fund and to build the parish hall and classrooms. He was deeply involved in civil rights and justice ministries, including housing justice. He became friends with farm labor leader Cesar Chavez, and according to his wife was instrumental in bringing Chavez and area farmers to a meeting at All Saints to begin the process of negotiation for better conditions for farmworkers. Fuller also helped bring a Planned Parenthood clinic to Oxnard.

While at All Saints, Fuller served on several diocesan boards, including the Peace & Justice Commission, Evangelism Commission, Hunger Task Force and Hispanic Commission.

Before his ministry at All Saints, Fuller served in the Diocese of El Camino Real (California’s Central Coast) as rector of St. Stephen’s Church, San Luis Obispo (1964 – 1971) and concurrently as chaplain at Cal Poly San Luis Obispo. A rash of student suicides led him to help establish the city’s first suicide help line.

John Fuller was born in El Reno, Oklahoma, on August 8, 1929. He attended Oklahoma State University, graduating in 1948. He then earned a degree at the United States Naval Academy and served five years in the Navy as a paymaster, attaining the rank of lieutenant. After his discharge, he worked for Lockheed Aircraft, where he helped design propulsion systems for airplanes.

Discerning a call to ministry, he attended Church Divinity School of the Pacific (CDSP), where he earned a master of divinity degree. Bishop Francis Eric Bloy of the Diocese of Los Angeles ordained him to the diaconate on Sept. 7, 1961 and to the priesthood March 1, 1962. He served as curate from 1961 to 1963 at All Saints by-the-Sea Church, Santa Barbara, which had sponsored him for ordination.

Fuller wrote occasionally for The Living Church magazine, particularly on death and dying, a topic he explored after his eldest son died from leukemia at the age of 10. According to his wife, he wanted people to know that “before you were born there were people awaiting your arrival to shower you with love. When you die you will be greeted by people waiting to shower you with love.”

“That brought a lot of people great comfort over the years,” Jarrel Fuller told The Episcopal News.