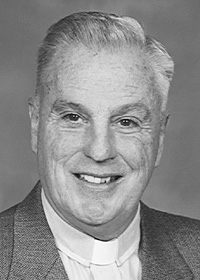 A memorial service will be held June 30, 2022, at St. Thomas, Dubois (time to be announced) and, at the family’s request, memorial contributions may be made to the parish.

Ensor is survived by his wife of 60 years, Jean of Dubois; daughter Molly (Sheldon) Shore of Sioux Falls, South Dakota; son-in-law Tim Parrett of Laguna Niguel, California; and granddaughters, Houston Parrett and Meaghan Allen. He is preceded in death by daughter Kate Parrett and his parents, Howard and Florence (DeBrock) Ensor.

Prior to his ministries in South Pasadena and San Juan Capistrano, Ensor served congregations and schools in Texas, Delaware and Massachusetts. He coached various sports teams and, in retirement, continued to receive regular calls and letters from his student athletes.

A point of pride for Ensor was marching with Martin Luther King Jr. in Selma, Alabama on March 25, 1965, joined by several fellow Episcopal priests.

Peter Crane Ensor was born March 13, 1938 in Cambridge, Massachusetts. He grew up in the nearby Arlington area and attended Buckingham Browne & Nichols Private School in Cambridge. He then joined the U.S. Marine Corps and was honorably discharged in 1956. In 1960 he graduated from Hamilton College in Clinton, New York, and in 1963 received his theology degree from Episcopal Divinity School in Cambridge, also attending classes at Harvard.

In addition to his love of people and sports, Ensor enjoyed traveling, joining Jean on 16 trips to Europe.