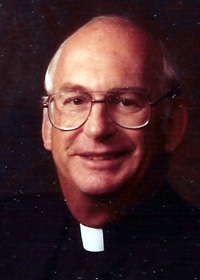 The Rev. Richard Shackell, rector emeritus of Grace Church, Glendora, died on July 17 of natural causes. He was 81, and had been in poor health and suffering from dementia for several years.

After his retirement in 1984 as rector of Grace Church, Dick and Jeannette Shackell stayed in the Glendora area for two years while he continued to work with a senior housing project in the city. During that time, the Shackells attended All Saints Church, Pasadena. When the housing project was completed, they moved to Santa Barbara and became members of Trinity Church.

During his tenure at Grace, Dick Shackell was active in the community, including service on Glendora’s Coordinating Committee. He was named Citizen of the Year in 1982.

Before coming to the Diocese of Los Angeles in 1976 to serve as rector of Grace Church, Shackell’s ministry was centered in the San Francisco-based Diocese of California, where he was founding vicar and later rector of Church of the Resurrection, Pleasant Hill (1959-1976), rector of St. Francis of Assisi Church, Noato (1956-59), and rector of Holy Trinity Church, Willows (1953-1956).

Jeannette Shackell recalls that Resurrection parish initially met in a room above a bowling alley before making arrangements to use a Seventh-Day Adventist church on Sundays. Eventually the congregation built its own church, and Dick later became its first rector. He also conducted the first services for a house church that later became Church of the Nativity in San Rafael (Marin County).

During their time in the Diocese of California, the Shackells became close friends of James Pike (Bishop of California 1958-1966) and George Millard (Bishop Suffragan of California 1960-76). Dick Shackell served that diocese as stewardship officer and on many other committees and boards.

Shackell was among the California clergy who answered the call of Dr. Martin Luther King to join in the Civil Rights march from Selma to Birmingham. He led the contingent from the Diocese of California, and was a marshall on the march. According to Jeannette, he counted his participation as one of the highlights of his life.

As ardent Anglophiles, the Shackells made some 20 trips to England over the years, and Dick Shackell became in 1978 a fellow of the Royal Society of [Industrial] Arts in London, which worked to improve the lot of workers in England.