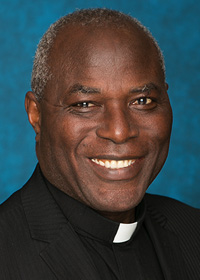 The Rev. Vincent Shamo, rector of St. Mary’s in Palms Church, Los Angeles, since 2005, died Dec. 3 after a long struggle with stomach cancer. He was 66.

Requiem Mass will be celebrated on Saturday, Dec. 12 at 10 a.m., streamed live on St. Mary’s Facebook page and via Zoom. For more information, click here.

Shamo was born in Teshie Accra, Ghana. He was for several years a monk in the Order of the Holy Cross before discerning a call to parish ministry.

He attended seminary at St. Nicholas College of Cape Coast and also studied in England. He also earned master of divinity master of arts degrees from the University of California at Berkeley in 2002 and 2003.

He met his wife in 1974 at school in Ghana. “He was always chasing me, trying to get me to come to Bible study,” Florence told Bishop John Harvey Taylor. “He said whenever I went to work, I was going to do the work of God. I always think of that when I’m with my patients.”

Shamo was ordained to the diaconate and priesthood in 1985 in the Church of the Province of West Africa. After his ordination, he served at St. Mary the Virgin Anglican Church in Accra, Ghana’s capital city before moving to the United States of America to study at Berkeley, where he also served at St. Clement’s Church.

After moving to Los Angeles, he assisted at St. James in the City Church on Wilshire Blvd. and was a chaplain at Canterbury Irvine, the Episcopal Ministry at the University of California in Irvine, before accepting the call to be rector of St. Mary’s in Palms.

During Shamo’s tenure, St. Mary’s continued its tradition of Anglo-Catholic worship and social engagement, sponsoring refugees from Liberia and sheltering two Cameroonian physicians who were seeking asylum in the U.S. He continued weekly services in Spanish as well as English. In 2015 St. Mary’s helped to establish the Palms Emergency Preparedness Coalition, whose earthquake supplies filled barrel after barrel in the rectory garage.

In 2019 Shamo presided over St. Mary’s centennial celebration, a festive service at which former Archbishop of Canterbury Rowan D. Williams, an old friend, was guest preacher.

The several hundred worshippers who packed the church for the event laughed as Shamo welcomed them and declared, “I plan to be here for another hundred years.”