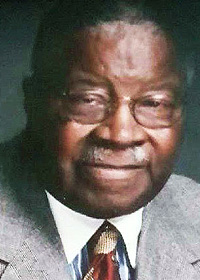 Canon Francis Shelton Banks – treasurer of the Diocese of Los Angeles from 1989 to 1995 and a parish leader at All Saints, Pasadena, and previously St. James’, Los Angeles – died March 30, his 92nd birthday, at Cedars Sinai Medical Center in Los Angeles. Cause of death was kidney failure after recent years of illness, said his daughter, Sheryl Banks Fisher, who noted that at her father’s request no services are planned.

“I give thanks for Canon Banks and the many ways in which his ministries strengthened our diocese and its congregations,” said Bishop John Harvey Taylor. “On behalf of the diocesan community, I extend to his family our condolences with appreciation for his many years of service.”

A successful real estate investor and 30-year employee of the Los Angeles Unified School District, Banks was elected in 1989 to the Corporation of the Diocese, which in turn elected him diocesan treasurer later that year to succeed Frank V. Marshall who retired after 12 years in office.

Bishop Frederick H. Borsch in 1994 named Banks an honorary canon of the Cathedral Center of St. Paul (now St. Paul’s Commons) where the main altar – crafted with marble and woodwork from the diocese’s 1924 St. Paul’s Cathedral – was given by Banks as a memorial to his parents, the Rev. Herbert C. Banks, an Episcopal priest, and Gertrude Dash Banks.

Borsch and his successor, Bishop J. Jon Bruno, together with Bishop Suffragan Chester L. Talton, hosted celebrations in 1995 thanking Banks for his life-long service to the Episcopal Church culminating in his tenure as diocesan treasurer. He was succeeded by Canon Peter Mann, who served until 2005 and was followed by Canon Larry Sawyer.

At St. James in-the-City, Banks served two terms each as senior warden, junior warden, and vestry member. He served on the St. James’ School building committee, the board of St. James’ Manor senior housing complex, and as a representative to the Mid-Wilshire Parish Council while also volunteering as an usher and assisting in the parish’s food pantry. Before joining St. James’, Banks was active at St. Philip the Evangelist Parish, Los Angeles.

At All Saints in Pasadena, Banks was a vestry member, parish council chair, and lay eucharistic minister.

Born March 30, 1928 in Muskogee, Oklahoma, Banks spent his childhood years in New York City before attending Long Island University and serving two years in the U. S. Army. Thereafter he attended Cal State L.A. and the University of Southern California. In Los Angeles he began his career as an educator, investor and entrepreneur, his daughter said, noting that he “traveled the world, frequented antique shops, loved jazz and classical music, and always had season tickets to the Los Angeles Music Center.”

In addition to Fisher, who resides in Los Angeles, survivors include a granddaughter, Sara Fisher Lott; four great-granddaughters, Shakira, Tytianna, Shalandria, and Tashandria, all of Atlanta; and many cousins and friends. Banks is also predeceased by a sister, Gloria.