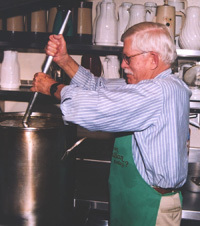 A memorial service will be held at 11 a.m., Saturday, June 17 for Canon Roger Thomas at St. James’ Church, 3903 Wilshire Blvd., Los Angeles. He died April 16 at 88. He was a lifelong member of St. James in-the-City Episcopal Church and member of the Episcopal Church Foundation. He is survived by his wife Marilyn Thomas, brother Hayward Thomas, children Ross Thomas, Karin Dunn, Debbie Collins, Peter Thomas and Charlie Thomas, and 12 grandchildren and 3 great-grandchildren.

Thomas, after retiring from a long career as an insurance executive, was an active volunteer for the St. James’ food pantry and soup kitchen. He also volunteered at many non-profits, including the Los Angeles County Museum of Art, where he was a docent. He enjoyed fly-fishing, photographing his family in action, fine food and wine, and, always, a good book. Bishop Fred Borsch named him an honorary canon of the Cathedral Center of St. Paul in 1993.

Thomas served in the U.S. Navy as a staff officer during and after the Korean War. Despite his disappointment at not being posted to a carrier until after the Armistice had been signed, he served in the Pacific aboard the USS Oriskany. He never made it known that his father, Charles Thomas, was Secretary of the Navy in the Eisenhower administration – an attitude of modesty and aversion to favoritism that he maintained all his life.

In lieu of flowers, donations may be made to the Henry’s Fork Foundation to protect fish and wildlife in the Idaho waters where Roger fished for more than 50 years and where his children and many of their children caught his passion. They will reunite there later this summer to celebrate his life.