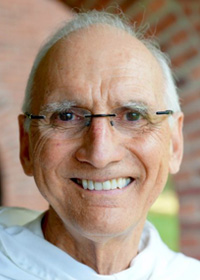 Roy Earl Parker Jr., a monk of the Order of the Holy Cross and former resident at the Mt. Calvary monastery in Santa Barbara, died at the order’s West Park, New York, facility on Feb. 20. In addition to his ministry as spiritual guide and monastic, Parker was an accomplished calligrapher whose work is displayed in churches and homes throughout the Diocese of Los Angeles and beyond.

“Roy was diagnosed with an aggressive form of ALS last year, and his final months were a terrible struggle,” wrote the Rev. Adam McCoy, prior at Mt. Calvary. “The monastic community at West Park cared skillfully and lovingly for Roy in his illness. We rejoice in his life of faith and joy which he shared so generously.”

Requiem Eucharist was celebrated at the Santa Barbara monastery on Feb. 21.

Parker, who was born in California, was graduated with a bachelor of science degree from MIT in 1955. He earned his master of divinity degree at Episcopal Divinity School, Massachusetts, in 1964 and also studied for a year at a Jesuit school of theology. He was ordained to the diaconate in 1964 and to the priesthood in 1967.

He was a member of the Order of St. John the Evangelist from 1958 to 1972, then joined the Order of the Holy Cross. He returned to the Diocese of Los Angeles in the early 1990s to serve at Mt. Calvary.

From 1970-71 he was on the staff of the Boston-based Diocese of Massachusetts, and at the Servant Church in Jamaica 1971-72. He served as a chaplain for the Manhattan Plaza AIDS Project in New York from 1989 to 1992, and on the Diocese of New York’s Liturgical Commission from 1985 to 1992.