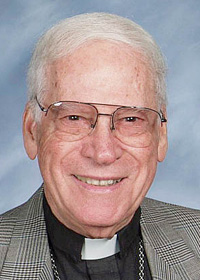 The Rev. Canon L. Lynn Parker died on April 15, 2010 at age 85 after many months of illness, and following the death on March 23 of his wife, Ruby Mitchell Parker, who also had been ill for some time. The Parkers are survived by their sons, Roger, Ronald, and Gordon, and their families.

A memorial service for Lynn and Ruby Parker is scheduled for 11 a.m. on Saturday, April 24, at All Saints Church in Riverside, 3847 Terracina Drive, where Lynn had assisted since 1980. Ruby was a teacher in Riverside’s Alvord Unified School District for many years. Both Ruby and Lynn were active in Marriage Encounter, serving on the national board, and in the diocesan Cursillo community. They both enjoyed an active role in welcoming Diocesan Convention to Riverside each year, with Ruby serving as a volunteer for the Secretary of Convention. Despite their several health challenges, both the Parkers made a point of visiting the convention in  December 2009.

During World War II, he served in the U.S. Navy medical corps from 1943 to 1945 in the South Pacific. He was a 1949 graduate of Whittier College, and he was sponsored for ordination by St. Matthias Church there. He graduated in 1953 from the Church Divinity School of the Pacific. Lynn Parker was born March 6, 1925 in Edmond, Oklahoma.