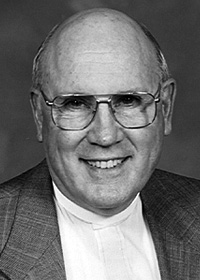 The Rev. Thomas Beckwith Hubbard, certified financial planner and for some 30 years a volunteer priest at All Saints Church, Pasadena, died July 30. He was 81.

Hubbard also served in locus tenens at St. Timothy’s Church, Apple Valley in 1982-83. In the 1970s he was a chaplain at California State University at Bakersfield and associate priest at St. Paul’s Church, Bakersfield (Diocese of San Joaquin). Previously he was consultant for parish renewal and chair of the Children’s Commission in the Diocese of Central New York; curate at Trinity Church, Elmira; and rector of Gethsemane Church, Sherrill, New York.

He was born June 24, 1938 in Cleveland, Ohio. He received a bachelor’s degree at Hiram College in 1960, and a master of divinity degree in 1964 at Episcopal Divinity School in 1964. He was ordained to the diaconate on June 13, 1964, and to the priesthood the following December in the Diocese of Ohio.

His wife, Mary, whom he married in 1997, recounted his frequent service at All Saints, Pasadena, at the noon Eucharist, often at very short notice if one of the regularly scheduled clergy was called away by pastoral duty. Since his business office was only a block from the church, when a call came in at 11:45 a.m., she said, he knew it was a call from All Saints asking for his help, and he would quickly walk to the church to take the service.

“He was the most wonderful man. God blessed us,” said Mary Hubbard. “He had a great, dry sense of humor and he was so kind. He helped so many people, just by being a friend.”