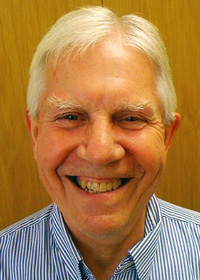 Walter Johnson, a lay advocate in Episcopal and interfaith peace and justice ministries, died May 12 in Los Angeles after recent years of declining health. He was 83 and had resided in Santa Monica with his wife, the Rev. Canon Joanne Leslie, archdeacon emerita of the Diocese of Los Angeles.

With Leslie, survivors include Johnson’s sons, Corydon Johnson of Piedmont, Calif., and Barton Johnson of Agua Dulce, Calif., and daughter, Laurie Logan of La Crosse, Wis., along with their families, and many friends. A funeral will be held at 10:30 a.m. on Saturday, July 9 at Holy Faith Church, 260 N. Locust Street, Inglewood 90301, where Johnson was an active parishioner.

Johnson focused on advocacy priorities including gun control and socially responsible investing. As part of his ministry, he used his skills as a successful investor and food industry executive to assist individuals and groups with investment strategies.

During his career Johnson held various sales and finance positions for regional and national companies including Michigan Fruits, Curtice Burns, and Hunt Wesson.

At Holy Faith, Johnson was a leader in the parish Justice and Mercy Commission. He served two terms on the vestry and was parish treasurer for several years. He was an acolyte, reader and sang in the choir until his advancing Alzheimer’s Disease forced him to stop.

During these years, Johnson also participated in interfaith social justice organizations including the monthly Nonviolence Workshop led by the Rev. James Lawson, CLUE (Clergy and Laity United for Economic Justice), and People of Faith Against the Death Penalty.

After meeting at a conference sponsored by the diocesan Peace and Justice Commission in 2001, Johnson and Leslie were married by the Rev. Canon Gary Commins in 2003 in Berkeley, Calif., at All Saints Chapel of the Church Divinity School of the Pacific. Leslie, a retired public health practitioner and professor in the field, was ordained a vocational deacon in 2002 and served the diocese as archdeacon from 2011 to 2017.

Johnson was born in East Grand Rapids Michigan on June 19, 1938. He was educated in Western Michigan and received his MBA from the University of Michigan in 1962. He later resided and worked in Rochester, N.Y., and in 1989 moved to Gardena, Calif., where joined St. George’s Episcopal Church in nearby Hawthorne.

Memorial arrangements, including a service at Holy Faith, are pending.