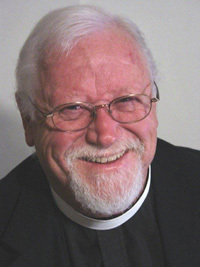 The Rev. Canon Warren Stanley Nyback, rector emeritus of St. Paul’s, Pomona, and a former diocesan chaplain to retired clergy and spouses, died Saturday, May 6, at his home in Pilgrim Place, Claremont. He was 77 and had suffered the effects of Alzheimer’s disease.

Survivors include his husband, Michael Witmer, and Nyback’s daughter, the Rev. Rachel Anne Nyback, rector of St. Cross, Hermosa Beach. He is predeceased by his wife, Gretchen, and by their daughter Amy.

Bishop J. Jon Bruno and Bishop Suffragan Diane Jardine Bruce will share in officiating at Requiem Eucharist at 11 a.m. on Saturday, May 20, at St. Paul’s Church, 242 E. Alvarado St., Pomona. Clergy are invited to vest in cassock, surplice and white stole, and to walk in procession.

Born in Los Angeles on August 2,1939, Nyback said he felt called to the priesthood while a junior high-schooler attending summer camp. After graduating from USC and the Church Divinity School of the Pacific, he was ordained to the priesthood by Bishop F. Eric Bloy in 1965. Nyback first served as curate at St. Luke’s, Long Beach (1964-1967) and then as rector of St. Timothy’s, Compton (1967-72), before beginning in 1972 as rector in Pomona, where he served for 29 years. He was a Shakespeare scholar and a master baker, and played major roles in a long series of plays produced at St. Paul’s, including Tevye in Fiddler on the Roof and Billis in South Pacific. He was long active in diocesan ministries, serving on Diocesan Council and Standing Committee, as a deputy to General Convention, on the Episcopal News editorial board, and on numerous diocesan bodies, including the Bishop’s Commission on LGBT Ministries.

“Pastor’s acceptance of others and himself will be his legacy,” reads the headline of an L.A. Times feature article published just after Nyback’s final service in Pomona on Christmas Eve 2001. There, with the support of the St. Paul’s congregation after Gretchen Nyback’s death in 1992, Nyback and Witmer, an attorney, began living openly together and eventually were married, advocating for full inclusion of LGBT people in all areas of church and society.