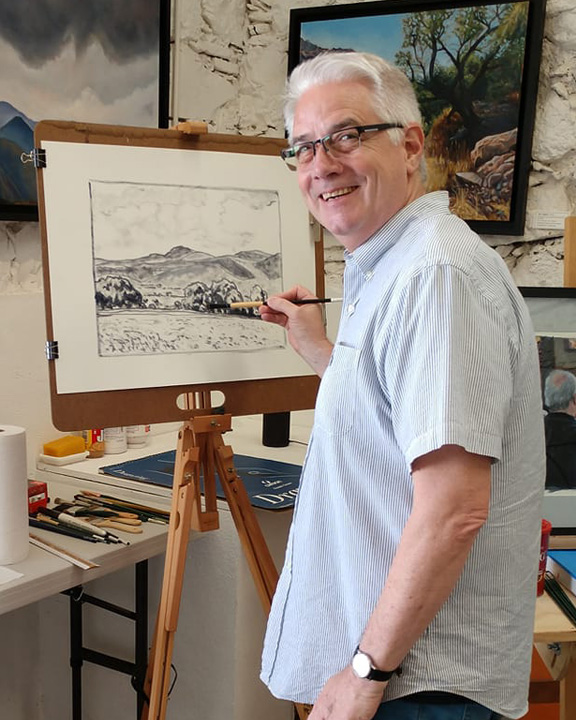 [The Episcopal News] The Rev. William McCord “Mac” Thigpen III – whose ministry in Los Angeles from 1988 to 2002 included his appointment in 1991 as the bishop’s liaison to the LGBTQ+ community, a first-ever post within the diocese – died Sept. 20 at his home in San Miguel de Allende, Mexico. He was 67 and had been suffering the effects of amyotrophic lateral sclerosis (ALS, Lou Gehrig’s disease).

A memorial service is pending at St. Paul’s Episcopal Church in San Miguel de Allende where Thigpen assisted the rector, the Rev. Canon George F. Woodward III, a longtime colleague in the Diocese of Los Angeles. Another service will be held at a future date at St. Bartholomew’s, Atlanta, where Thigpen was rector from 2002 to 2016 and where his ashes will be interred in the parish’s memorial garden.

An accomplished painter, Thigpen produced sought-after landscapes, cityscapes and portraits, frequently posting photos of his work to his Facebook page. More about his painting is here.

“I paint because I love to paint,” he wrote on his website. “In this phase of my life, I am able to make art my full-time vocation. I am in a new place in my expression of my art – freer, expressive, alive, with a sense of longing.”

Prior to serving in Atlanta – where he was born on Aug. 16, 1955 – Thigpen was from 1990 to 2002 rector of Trinity Church, located on Melrose in East Hollywood. Early in his tenure there he was instrumental in guiding the on-site Trinity Learning Center which offered courses in computer skills and vocational training for students living with HIV/AIDS. The program was operated by Project New Hope, a ministry established through the Bishop’s Commission on AIDS in the Diocese of Los Angeles.

Concurrently, the Bishop’s Commission on Gay and Lesbian (later expanded to LGBTQ+) Ministry was formed within the diocese to facilitate education, advocacy, and pride events, expanding the diocese’s representation at the Christopher Street West parade and festival, a presence launched in West Hollywood in the early 1980s by Canon Randolph Kimmler.

Thigpen came to Los Angeles in 1988 to serve as assistant rector at St. James’ in the City, also serving as chaplain at St. James’ School in 1990-91. Previously he served at Trinity Church, Tulsa, in the Diocese of Oklahoma, where he was ordained to the priesthood in 1983. That year he received a master of divinity degree from the General Theological Seminary in New York, having completed two bachelor’s degrees at Oral Roberts University in 1978.

In junior college, Thigpen, who had grown up in a self-described strict Southern Baptist home, began studying art and embarking on new ways to express creativity.

“Being creative…,” he wrote years later on his artist’s website, “involves all of us and how we live our lives, how we go about our busyness, our relationships, our family and friends, our world and our own well-being. Being creative is being life-givers, full of hope and promise, seeing possibilities where all seems chaotic or impossible, breathing life into that which seems lifeless, helping to make all things new. How will we use it?”