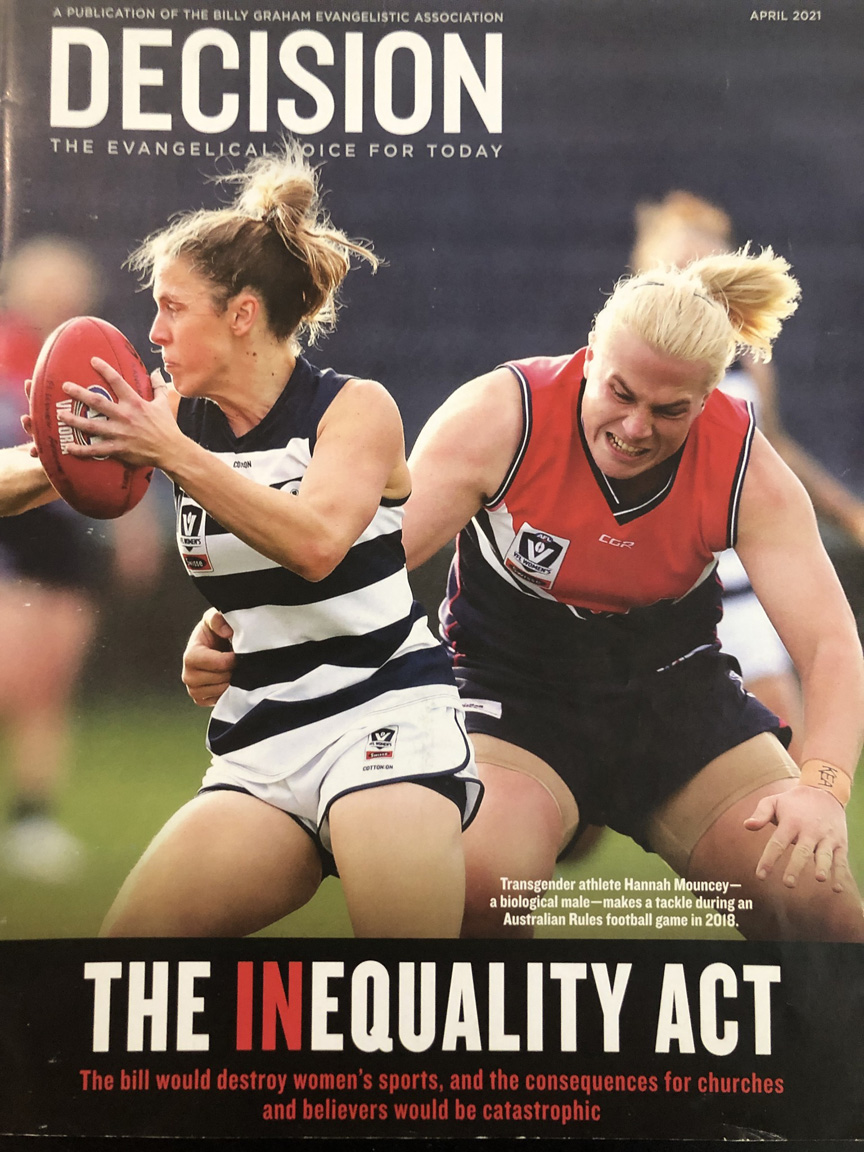 A trans woman tackling a competitor in an Australian rules football game in 2018. This photo was used on a magazine cover in April 2021 by an evangelical Christian organization to drum up opposition to trans athletes.

Not long ago I had the nicest conversation with a couple, women who were athletes when they were a little younger. One was a runner, the other a soccer player. I couldn’t help but notice that they were taller than I. A dude just can’t help it. I’m maybe five ten, so they were pushing six feet.

They acknowledged that their height gave them an advantage in sports — that, of course, and their talent. As we talked, it occurred to me that their competitors might well have said that being so tall was an unfair advantage. That somehow we needed a handicap system designed to make sheer ability the key factor.

You could do it easily with computers. Figure out how long it takes equally talented people who are six feet tall and five feet tall to run 50 yards and compute, giving the shorter runners more time. Otherwise, medals are awarded according to accidents of nature instead of athletic prowess. It’s so unfair, right? Bring on the algorithms!

As I write that, I can imagine someone in our it’s-unfair culture agreeing with me. The father of an especially dexterous six-foot, 210-pound 16-year-old who wants to be a ballet dancer, or a five foot two freshman with a wicked jump shot who can’t even get a tryout at UCLA. I don’t think it will come to that — except that it has, because some people still insist that trans female and male athletes’ physical characteristics should preclude their competing with others of their gender.

Eighteen states have passed laws banning trans girls and women from competing in sports supported by public funding. What is this, the Middle Ages? How about a law endorsed by short people saying tall people can’t play beach volleyball in the Olympics? If I have the right to use my size and height, as well as reflexes and instinct, to excel in sports, then everyone does. Otherwise, you’re dividing, stigmatizing, creating scapegoats, and engendering suspicion and hate. The week people were killed at an LGBTQ+ club in Colorado Springs is a good time to say it. Being a trans woman is one of two ways God has ordained to be a woman. On God’s field of dreams, everybody plays.