Bishop of Tokyo renews calls to ‘walk together’ 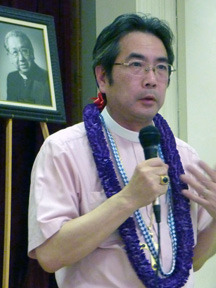 At St. Mary’s Church in Los Angeles — originally founded as a mission to Japanese immigrants — Bishop Andrew Oohata of Tokyo tells stories of earthquake recovery in Japan. A photo of beloved former rector John H. M. Yamazaki is behind the bishop. Photo/Keith Yamamoto

Bishop Suffragan Diane Jardine Bruce, who was among more than 40 Angelenos who also attended the conference in San Francisco, said she invited Oohata to L.A. after the EAM gathering.

“It was important to be there to celebrate 40 years of Asiamerica ministry, especially as we in the Diocese of Los Angeles have the most varied, active Asian congregations worshiping in their native languages of any other diocese,” Bruce said.

“It is important that our ministry partners around the world, especially those in Asian countries, see and hear what the Asiamerica experience has been and is for those in the United States. Stories and ideas are shared and bonds are formed that enrich the lives of congregations both here and in Asia.”

Oohata regaled the gathering with personal stories, even singing a song in Japanese, but his remarks also included the very serious challenges faced in post-earthquake Japan. The Diocese of Tokohu is one of eleven dioceses in the Nippon Sei Ko Kai (NSKK), the Anglican church in Japan, with 35 parishes and five 5 chapels, representing about 5,000 congregants, 60 percent of whom are 70 years of age and older.

The magnitude-9 earthquake struck off the coast on March 11, 2011, triggering a tsunami and killing and displacing thousands of people. It also heavily damaged Sendai Christ Church, the cathedral in the Diocese of Tokohu, an outlying region.

Wearing floral leis bestowed upon him by the Rev. Anna Olson, St. Mary’s rector, and parishioner Kathryn Nishibayashi, Oohata told the gathering through interpreter Chikako Tsukada that the tsunami occurred one month after his February 2011 consecration.

“At first I thought God didn’t want me to be a bishop,” he joked.

Then sobering, he noted that the damage impacted about 500 miles of coastline and took a devastating toll on families who lost loved ones. But the diocese has pledged to help rebuild the cathedral and assist in what will be a long-term recovery through a project titled “Let Us Walk Together.”

“So, now we need to stand up,” he said. “We need to move on and we try to get every help that we can get, to sustain us, our life and we need to go stand up and start over life again. We try to do everything we can do. We try hard.”

Oohata sold a diocesan bishop’s residence and committed diocesan endowment funds to aid in earthquake relief, an amount totaling about $3 billion yen (approximately $30.1 million US.). He has committed to raise more money.

“We are committed to help with emergency relief to support the diocese of Tokohu because with 10 clergy it is so hard for them to support the people of the region,” he said.

As the church begins to enter the recovery’s second phase, “I’m not just talking about the Diocese of Tokohu,” Oohata added. Many survivors are still displaced and homeless, unemployed, “especially in the area of Fukushima, because of the nuclear accident.”

Following the earthquake, there was a series of accidents and equipment failures that resulted in nuclear meltdowns and the release of radioactive materials at the Fukushima Nuclear Power Plant, judged the worst nuclear accident since the 1986 Chernobyl disaster in Ukraine.

Additionally, economic problems have beset the area because “no one wants to buy their food products,” Oohata said.

The church has reached out to many of the Fukushima residents who migrated to Tokyo but are marginalized because of their dialect and inability to gain employment, he said.

“We encourage the people living in Tokyo to meet and have coffee with them and for their kids to play together,” Oohata said. “We meet together once a month.”

Although the government insists the plant and surrounding area are safe, people are skeptical and are worried about long-term effects of radiation and the nuclear meltdown, he added.

“In 2012, in the springtime a tulip came up from the ground. You know the size of a tulip, right? This one came up almost the size of a sunflower,” Oohata said.

He added that many of the parishes in NSKK “don’t like it that the House of Bishops is talking about politics. You can talk about peace and justice and prayers, but they don’t want to get involved in politics,” he said.

As the church enters the second phase of recovery, long-term efforts, he also added that “pace” is very important. “We’re doing this project together but sometimes we need to stop and discern, think things through. We need a moment. When you are walking together, it has to be at your neighbor’s pace. You have to be mindful of that … to take a step back and think about things.”

Most of all, prayers are what the people need, he said, adding that hearts and minds are changed through prayer. “Yes, we need money, the people in the region need money, but we also need your prayers.

“I really ask you to pray for us and keep us in your prayers because prayer is so powerful.”