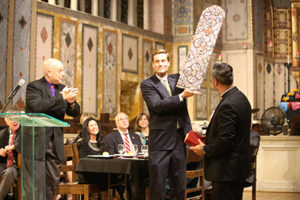 Homecoming was the theme and comfort food was on the menu Nov. 3 at the second annual Bishop’s Dinner at St. John’s Episcopal Cathedral in Los Angeles.

They also helped to raise $50,000 to benefit the mission and ministry of the Diocese of Los Angeles.

Diocesan Bishop John H. Taylor sparked the festive mood by encouraging attendees to get out and vote. Affixing an “I Voted” sticker to the center of his clergy tab collar and putting it on, he assured the gathering that, whatever the outcome of the Nov. 6 mid-term elections: “we’ll still have our work together.”

That work includes recalling traditional Episcopalian and Anglican “Via Media” roots, loving and honoring everyone and working for the common good.  “Come home,” he said, “to a place of connection, to do works of justice.”

Taylor introduced the guest of honor, Andrew B. Leeka, who has served for the past 22 years as president and chief executive officer of Good Samaritan Hospital, an institution of the diocese.

Leeka recalled the 408-bed hospital’s humble beginnings with nine beds in 1885, by Episcopal laity. Their goal, to be a healing presence and to serve everyone, continues to this day, he said.

Although the hospital is located in the impoverished Pico-Union neighborhood of Los Angeles, Leeka told the gathering the facility continues the tradition of caring begun by early founders, welcoming all. “We don’t care who they are, where they come from … we take everyone.”

Taylor presented him with a print likeness of a 13th century window from the Chartres Cathedral in France, depicting the Parable of the Good Samaritan.

Bishop Suffragan Diane Bruce introduced keynote speaker Diana Butler Bass, who has authored ten books. She has appeared on CNN, MSNBC, PBS, CBS, NPR, and is a founding blogger for the Huffington Post religion and Beliefnet. She has been a frequent contributor to the Time Magazine, USA Today and the Los Angeles Times. From 1995-2000, she wrote a weekly column for the New York Times Syndicate.

“I’m home. I love you so much,” she proclaimed to the enthusiastic gathering, before sharing excerpts from her most recent work, “Grateful: the Transformative Power of Giving Thanks.” She described Santa Barbara as her “soul home” where she attended Westmont College and attended services at All Saints, Montecito – later befriending the Rev. Canon Mark Asman, then rector of Trinity, Santa Barbara. She said her Santa Barbara experiences “saved my life at least twice.”

And although she’s been gone from the diocese for more than 20 years, “I always considered myself a missionary from the Diocese of Los Angeles,” to other places, added Butler Bass, who resides in Alexandria, Virginia.

Noting that we haven’t been living in exactly grateful times, Butler Bass cited a Pew study that gratitude is often considered a feeling, rather than a way of life.

When she googled the word gratitude, she said, she discovered photos of three different physical postures that telegraphed the essence of gratefulness: a woman on a pier, her hands raised in exultation, looking up; an African American man with a huge smile on his face, holding his hands over his heart and an Indian woman, a still from a show Oprah did on world religion “and you could see the reverence on her face.”

Those images came to her as a bodily prayer, and call her into another place, touching “the heart of the universe,” she said. “Abundance is the deepest truth of the universe in which we live.”

The final photo, of reverence, is “acknowledging that our whole being is of receiving … do we live to see life as a gift. We are called to be gift-givers.”

A special art exhibition and sale, featuring the works of Lorenzo Hurtado Segovia in wood, fiber, paper, paint and even sand and tar, also benefitted the mission and ministry of the diocese.

The Rev. Lorenzo Lebrija, diocesan development officer, organized and served as master of ceremonies for the event. The Very Rev. Canon Fernando Valdes, canon for operations at St. John’s Cathedral, carried out arrangements.

“Come Home” is also the theme for the upcoming Nov. 30-Dec. 1 annual meeting of the Diocese of Los Angeles, to be held at the Ontario Convention Center.