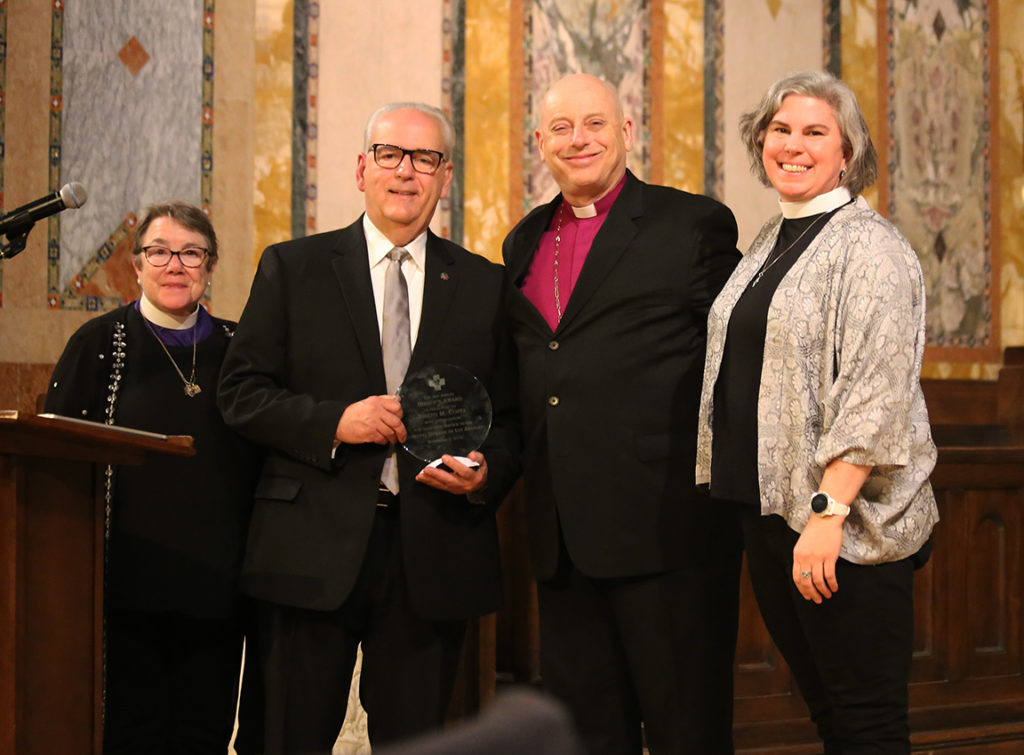 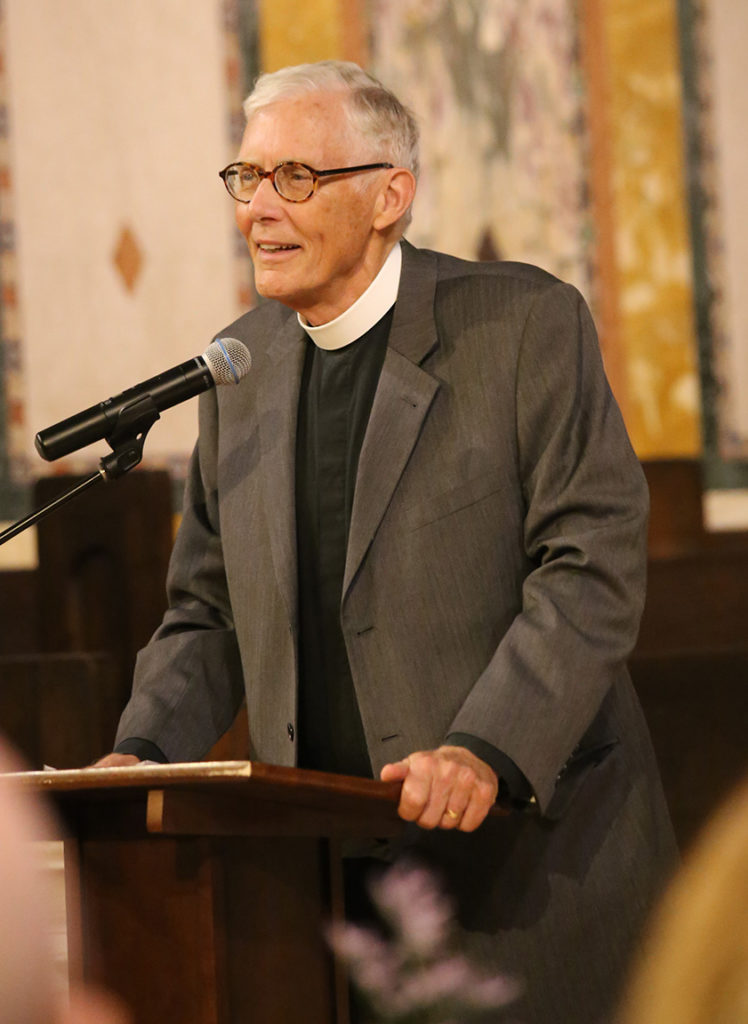 Dean Gary Hall delivers the keynote address at the Bishop’s Dinner, substituting at the last minute for Dean Kelly Brown Douglas, who was unable to attend due to a death in her family. Photo: Janet Kawamoto

“The church has an absolute right — indeed a duty — to be an active participant in the public square. If you read the scriptures carefully, you’ll see that the Bible’s ethics are overwhelmingly concerned with social, not personal, morality. The prophets chastise Israel for its shared public faithlessness, and they call Israel to a collective righteousness. In our culture, we experience Christianity filtered through American individualism, and so we tend to think that God cares most about our private morality. But it just isn’t so.

Hall’s address, in which he challenged Episcopalians to engage in the public square as a matter of faith, had a strong thematic tie to the night’s Bishop Award honoree, Joseph Costa, executive director of Hillsides, a social service agency for children and families that started early in the 20th century as an Episcopal orphanage and continues today as an institution of the Diocese of Los Angeles. Costa has led the agency since 2011, overseeing a number of ambitious initiatives and strengthening Hillsides’ work. 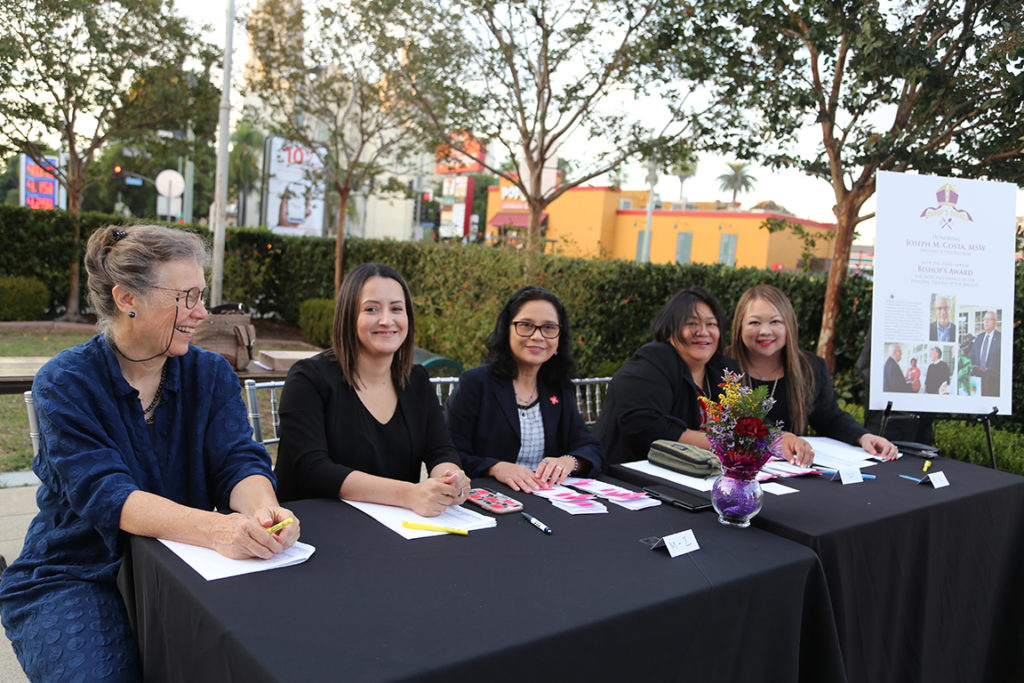 Hillsides “has seen its mission and work expand dramatically since 2011, all under the leadership of our Bishop’s Award honoree tonight, Joseph M. Costa,” said Bishop John Harvey Taylor as he welcomed some 200 people to the dinner, served in the nave of the cathedral.

Taylor pointed out the newly installed cathedra, or bishop’s chair, and bishop suffragan’s chair. “St. John’s Cathedral enters its second decade at last having the seats which tradition holds make cathedrals cathedral. And it’s an exciting time for this institution where we gather. It’s a new invitation from the Spirit for the new role of an urban cathedral in the secularizing era in a great, diverse, dynamic city.”

Stacey R. Roth, Hillsides’ chief operating officer, introduced Costa, the night’s honoree. “He has the capacity to look at the current landscape and think about how it will affect our future. Hence he’s had many great initiatives with Hillsides,” she said. “Joe has spent his life advocating for children, youth and families.” She lauded Costa’s vision, advocacy and compassion as expressed in his work at the agency.

Citing his past as an ordained Roman Catholic priest in Massachusetts, Costa recalled being told by his predecessor, Canon John Hitchcock, that Deaconess Evelyn Wile founded the Episcopal Home for Children, as Costa put it, “to keep those good Episcopalian children away from those Roman Catholics.”

Admitting that he sometimes imagines Wyle “turning in her grave” at the thought of a former Catholic priest at the helm of her orphanage, Costa said, “I hope she takes some comfort 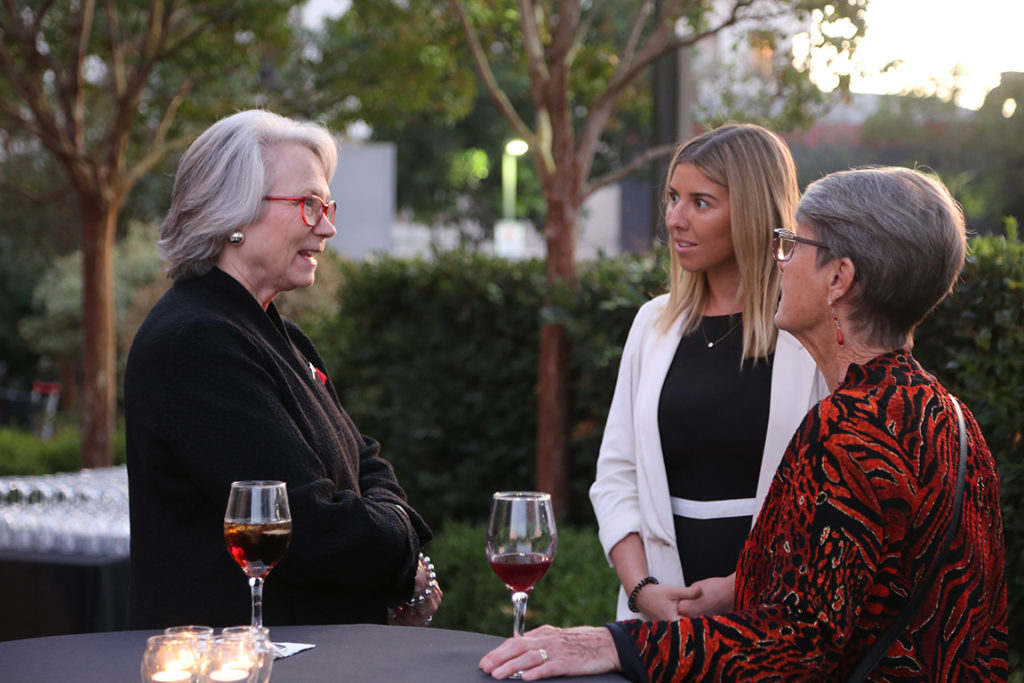 Attendees at the Bishop’s Dinner enjoy the reception in the garden at St. John’s Cathedral. Photo: Janet Kawamoto

knowing that the vision she had for the organization is still alive and well.”

Although Hillsides has no “denominational agenda,” he said, “the values that we embrace today are rooted in Gospel qualities. We identify the following core values at Hillsides: quality of care, respect, integrity, transparency, compassion, collaboration and innovation. These, of course, reflect our core belief that everyone is of value in God’s eyes. … No profession of faith will be more convincing than how we treat those in need.

Costa listed some of Hillsides’ programs: residential care for children separated from their families; special education; community-based mental health services, foster care and adoption programs; outreach to young adults; housing for those who have aged out of foster care at age 18 – some of whom, he noted, are at risk of being homeless. Hillsides’ services have expanded to Riverside and San Bernardino counties, in addition to the Los Angeles-Pasadena area; a total of 17,000 children, youth and families served. 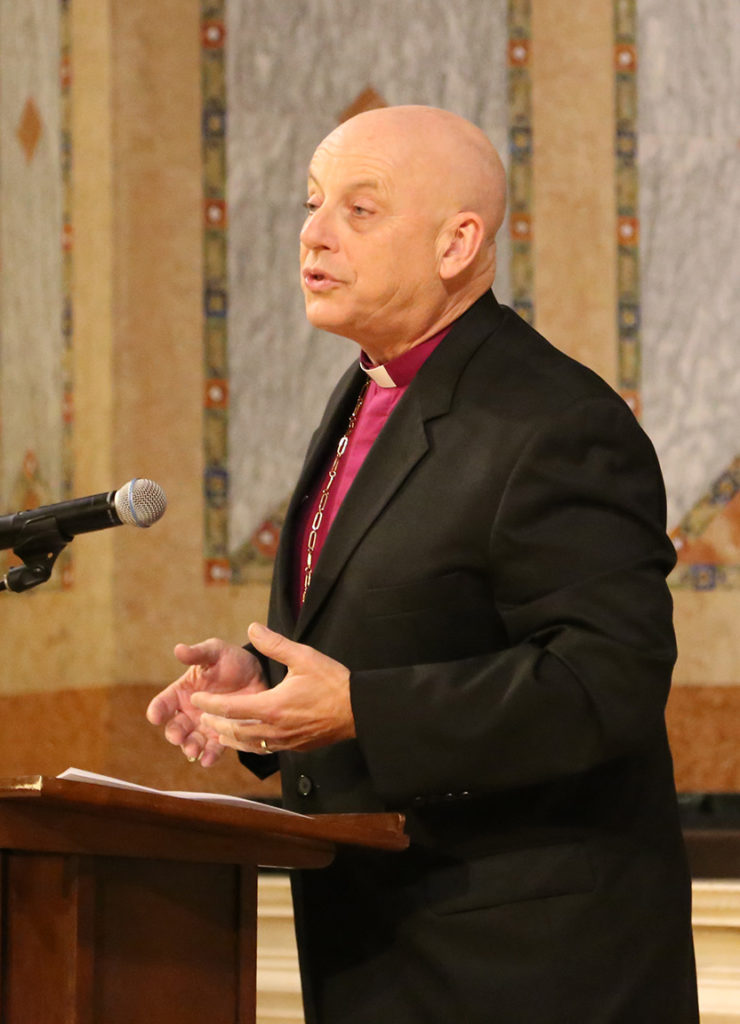 Civic engagement and the church

Hall stepped in as keynoter at the last minute when the scheduled speaker, the Very Rev. Kelly Brown Douglas, dean of Episcopal Divinity School at Union and theologian-in-residence at Washington National Cathedral, had to attend a Nov. 2 funeral after the death of her young niece.

Introducing Hall, Canon to the Ordinary Melissa McCarthy noted that he’s a former comedy writer who was inspired by the preaching of William Sloan Coffin at Yale University. “He’s done just about everything,” she said, citing his service in congregations ranging from a brand-new mission church (now Church of the Epiphany, Oak Park) to parish ministry in four states, serving as a seminary professor and dean, and as dean of Washington National Cathedral.

“Do you remember the six degrees of Kevin Bacon?” she asked, referring to a witticism that no one is more than six degrees of relationship from the actor. “In the Episcopal Church, I think it’s two degrees of Gary Hall. Everyone in the church knows someone who knows Gary.”

Hall outlined a vision of a church deeply engaged in civic life, always for the common good, or what Anglican theologian Richard Hooker called “commonwealth.” 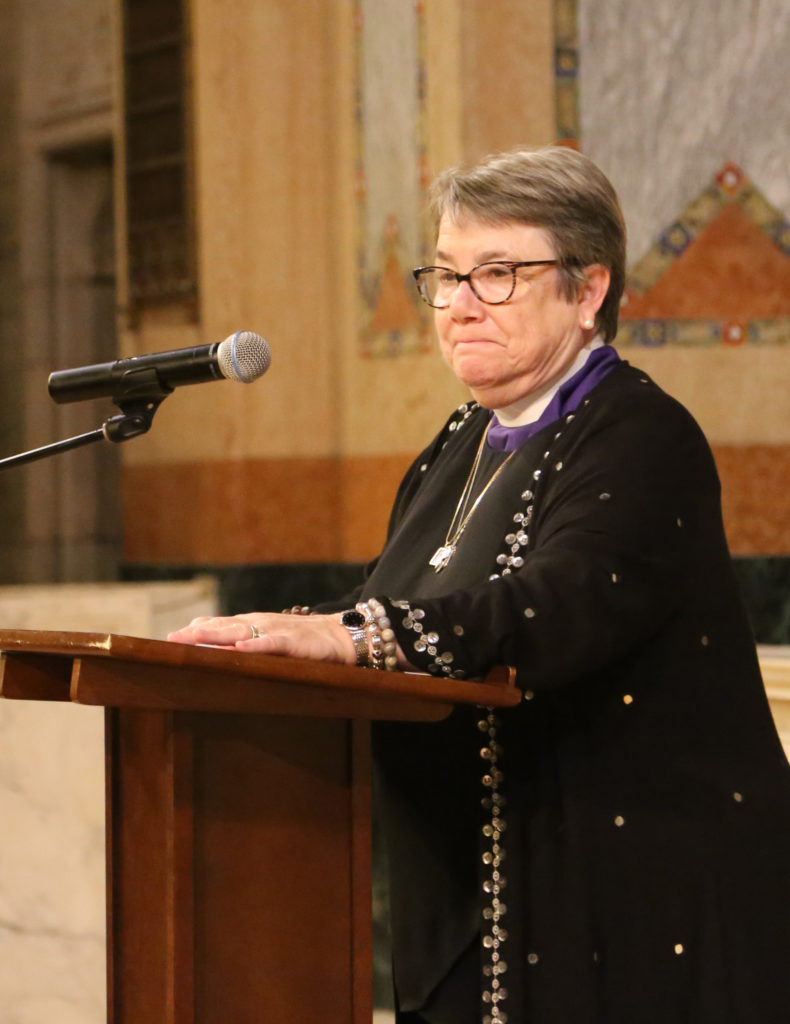 “A faithful church must be involved in the making of public policy,” Hall said. “But too often, the faith community is absent when those decisions are made. The government is there. The private sector is there. The nonprofit sector is there. But we as church are not usually at the table. We find ourselves excluded or we step back because of mistaken ideas about mixing religion and politics. But, like it or not, politics is the way human beings make collective decisions, and as those collective decisions are made we Anglican Christians have a warrant for participating. A new heaven and a new earth will not come about by us meekly staying home, worrying about our private problems.”

Participating in public policy is not quite the same as issue advocacy, Hall said, but the line is “blurry.” He described some of the initiatives taken by the National Cathedral during his tenure, relating to human sexuality issues, gun control, environmentalism. and racial justice.

“The point is that being a public church means taking public stands on issues that are important to us for theological reasons,” he said. “It then means building relationships with people in government, business, the academy, and the media to help us both articulate and broadcast our positions. And then it means doing the hard, unsexy work of showing up, not just in the pulpit, but in city council meetings, school board meetings, congressional hearings, chamber of commerce and service club meetings. The days are over when we can just get up in a pulpit, say something dramatic, and think doing so will make any difference.” 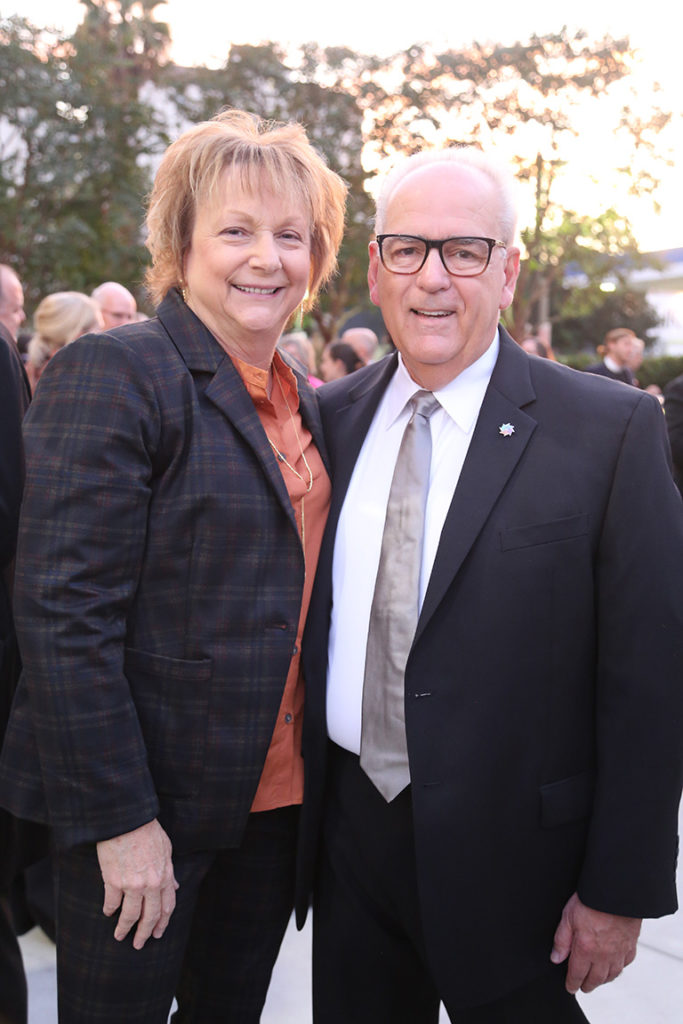 It’s not only the clergy and lay leaders who have to do this work, Hall added.

“Institutions have power, at least reputational power, and when they use it the results can be dramatic.” He specifically cited the impact that Hillsides has had in its community and the lives in its care through its advocacy actions as well as its services.

“Being the church in the public square is not only or even primarily about spouting sound bites on television,” he said. “It is about standing with and for people and working to make it possible for them to become the people God intends them to be. It is about living and striving for the common good.”

The full text of Hall’s address is here.

Campbell Hall, the Episcopal school in North Hollywood, was presenting sponsor of the Bishop’s Dinner, which raised funds for the mission congregations and mission centers of the diocese. The dinner was coordinated by Canon Kathy O’Connor, event planner Hannah Brown and the Rev. Fernando Valdes of St. John’s Cathedral. Bishop Suffragan Diane Jardine Bruce offered the blessing before the dinner, and Deacon Margaret McCaughley gave a closing prayer.

Taylor announced that the speaker at the next Bishop’s Dinner, to be held on Saturday, Nov. 7, 2020, will be the Most Rev. Michael Curry, presiding bishop of the Episcopal Church. He credited Bruce with arranging the visit with Curry in the course of her work as secretary of the House of Bishops.