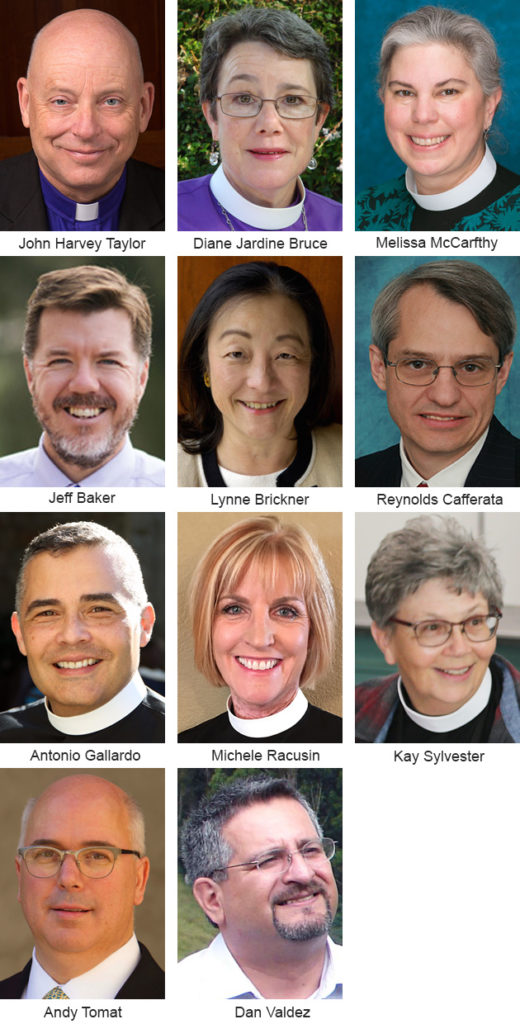 Bishop John Harvey Taylor announced at the April 16 meeting of Diocesan Council that he has named a new Bishop’s Task Force on Budget and Finance. Its members, shown above, include diocesan leaders and representatives of Diocesan Council, Standing Committee, Corporation of the Diocese and Diocesan Investment Trust.

The COVID-19 shutdown and its effect on diocesan ministries and budgets were primary topics at the April 16 Zoom-based meeting of Diocesan Council as Bishop John Harvey Taylor announced that he had named a Bishop’s Task Force on Budget and Finance to advise him through the crisis and beyond.

Calling the meeting to order, Taylor noted that it was the first-ever online gathering of the council, which represents Diocesan Convention between its annual meetings. Its members are clergy and lay representatives from each of its 10 deaneries, delegates elected by convention, and leaders of diocesan ministries.

Taylor said that at its weekly meetings the task force will assess the pandemic’s impact on the 2020 budget, explore how to leverage diocesan resources to sustain mission and ministry through the crisis, and undertake long-term strategic planning to put the diocese on a strong foundation. He said the capital campaign is vital if the diocese is to sustain and expand its ministries.

The 2020 MSF budget, adopted at the 2019 Diocesan Convention, was “somewhat overoptimistic” in its pledge estimates even before the coronavirus crisis, Taylor said. He had already asked diocesan staff to begin to identify possible savings, a process that he said had taken on new urgency as MSF payments plunged with the closure of churches and most of the economy.

Taylor and other speakers urged council members to work with missions and parishes in their deaneries that were having trouble fulfilling their pledges, stressing that the diocese understands the anxiety church leaders are feeling but needs the resource to continue its vocation to support all its institutions.

Valdez, a financial professional and board chair of the Episcopal Community Federal Credit Union, outlined the task force’s work. He also described a major effort by several staff members who put together a request for funds from the U.S. government’s CARES relief program. Because the mission congregations — many of which have been hard hit financially by the crisis — are all entities of the diocese, it was necessary to put together one grant proposal to maintain employment for diocesan and mission staff. Valdez specifically mentioned the “huge amount of work” done by Racusin and her staff, along with Canon Anilin Collado, Human Resources director, and Canon Clare Zabala Bangao, coordinator for missions, to gather and distill the necessary information.

With the help of Bishop Bruce, a member of the Church Pension Group board of trustees, the diocese has submitted applications to defer clergy pension payments for two or more months to help congregations manage their finances.

Bishop Taylor also noted that the capital campaign’s consultants have taken a different tack for the time being by providing support for the One Body & One Spirit Emergency Appeal, which is accepting donations to help people with short-term relief during the coronavirus crisis. Some $50,000 has been raised so far from about 120 givers.

In other business, the Council heard reports from several departments and ministries.

Bob Williams, canon for Common Life, reported on the diocesan communications program, which has been active in keeping the diocese informed during the COVID-19 shutdown. Communications include the twice-weekly Resource Roundup, which has temporarily replaced the weekly Episcopal News Update, and messages from the bishop’s office concerning all aspects of church life, including church operations, virtual worship services, online meetings, finances and the theology of operating at a distance.

Williams also emphasized the importance of the diocese’s email list, known as the Bishop’s Registry, which is used for mailing the Episcopal News Update, the Resource Roundup and other messages. He asked the council’s help in reminding all congregations to send their members’ names and email addresses to news@ladiocese.org to be included. (A spreadsheet with first name, last name and email address in separate cells is preferred, but the communication office will accept the list in any available format.) The list is used only for these purposes, Williams noted, and is never shared with other entities.

Antonio Gallardo reported that the Corporation of the Diocese has approved a request by St. Gabriel’s Church, Monterey Park, for extension of its lease for a preschool program.

The Rev. Canon Gary Hall told the council that the Standing Committee is working on completing a report about the diocesan reconciliation process.

Bishop Diane Jardine Bruce reported that she has been working with the diocesan stewardship committee, which is asking questions about what the clergy need in this unusual year. In her capacity as multicultural ministries officer of the diocese, she also reported that Asian-American Episcopalians are encountering anti-Asian aggression sparked by the coronavirus. The Gathering, a ministry for Asian-American Episcopalians, continues to host programs online, including a panel discussion on Saturday, April 25, “Being Asian Americans in the Age of the Coronavirus” (read more here).

Canon McCarthy reported that diocesan staff are working, mostly from home, to keep diocesan programs going. Members of the staff meet each morning and evening for prayer and to check in with each other. Expressing concern for the health and morale of church workers, she shared an “emotional phases of a disaster” chart used in an article by the Rev. Gay Jennings, president of the Episcopal Church’s House of Deputies.

Echoing McCarthy’s concern for clergy and lay ministers, Bishop Taylor said he has recently spoken to most of the diocese’s seminarians, providing reassurance as they deal with uncertainty about studies, seminary graduation, and CPE plans (clinical pastoral education).

Taylor also said that he and other diocesan leaders constantly monitor news reports and government advisories about the pandemic. He said that decisions about how and when to reopen churches and other institutions will continue to depend on policies set by Gov. Gavin Newsom and local county and city officials. “For the foreseeable future,” he said, “let’s keep doing exactly what we’re doing.”

The meeting concluded with a report from the Rev. Michael Bell, director of pastoral services at PIH Health Good Samaritan Hospital, which was a diocesan institution until its 2019 sale to Whittier-based PIH Health. Bell said that Good Sam was not yet overrun with coronavirus patients, but those they have tend to be poor, reflecting the neighborhood. Because of the necessary social distancing measures, he and the Rev. Jana Milhon-Martin, CPE director, are using technology and phones to make hospital visits and help families “visit” virtually. The chaplains also offer support to the hospital staff.

Diocesan Council will have its next meeting via Zoom on Thursday, May 14.