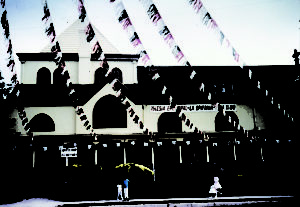 Church of the Epiphany, Los Angeles, is the city’s oldest Episcopal church building in continual use.

The Epiphany Conservation Trust, which raises funds for repairs and renovation at historic Church of the Epiphany, a cradle of the 1960 Chicano movement, has an opportunity to raise up to $150,000 for restoration work, and needs the help of Episcopalians of the Diocese of Los Angeles.

Epiphany is one of 20 historic sites nationwide, and the only one in Southern California, selected for a national grant competition that launched Sept. 24. Produced jointly by the National Trust for Historic Preservation, Main Street America, and American Express, and backed by National Geographic, the 2018 Partners in Preservation: Main Streets program will provide a total of $1.6 million in preservation funding to the projects that receive the most votes from the public.

The oldest continuously occupied Episcopal church in Los Angeles, Church of the Epiphany is one of the city’s historic treasures. In the 1960s it was the birthplace of La Raza, a newspaper for the Chicano movement. It also served as an early meeting place for the Brown Berets, was the Los Angeles headquarters of the United Farm Workers, and a planning base for the 1968 East L.A. student walkouts and Chicano Moratorium. The church remains a center for activism on behalf of immigrants, workers and LGBTQ people, as well as a vital hub of direct services in its Lincoln Heights neighborhood.

Bishop Diocesan John Harvey Taylor also has expressed his support for this project, and asks the diocesan community to participate. Anyone can vote online up to once a day between Sept. 24 and Oct. 26. Each voter may cast as many as five votes; all five may go to the same program.

“If we succeed, we’ll use the grant funds to rehabilitate the church’s basement, where much of the Chicano movement was organized,” says the Rev. Thomas Carey, vicar. “The renovated space will house our healthcare and legal clinic programs, our People’s History Project, and community meetings. The grant will also bolster a capital campaign already underway to not only preserve our history, but to keep Epiphany on the vanguard of redefining how the church as an institution can fuel social justice advocacy, service provision, and cultural and artistic expression.”

To vote, click here. Voters will need to create an account; then they can log in every day to vote. Competition will be stiff, according to the trust, so every vote will be important.