Episcopal Home Communities faces the future with a new name

To better reflect its mission and its new services for older adults in the greater Southern California area, The Episcopal Home Communities, a not-for-profit organization providing a broad spectrum of health care and living options for seniors, announced Nov. 23 that it will now be known as Episcopal Communities & Services (ECS), according to a news release. 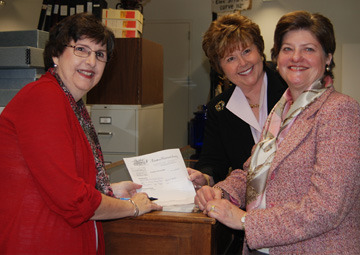 Janelle Morton, president of the Sophie Miller Foundation (right) and Martha Tambarrano, CEO of Episcopal Communities & Services (center) presented the signed agreement on Nov. 22 to Sherry Cavallo, Altadena Historical Society archivist to transfer ownership of the Scripps Home historical artifacts to the Altadena Historical Society. The Sophie Miller Foundation, named for the deaconess who established The Episcopal Home in the first decade of the 20th century, is a community support organization for ECS. Photo/ECS

ECS has been an institution of the Diocese of Los Angeles since it was founded in 1905 by Deaconess Sophie Miller as the Episcopal Home for the Aged. It now operates the Canterbury in Palos Verdes Estates and the Covington in Aliso Viejo, and continues to run the orginal Episcopal Homes property in Alhambra, known in recent years as the Scripps-Kensington. ECS sold the latter property to an Alhambra physicians’ group, known as TAG-2 Medical Investment Group, LLC, in October 2009, but will continue to manage it until 2014 under the sales agreement.

ECS will break ground on a new property, Monte Cedro, on the site of the former Scripps Home in Altadena in the fall of 2012.

“As Episcopal Communities & Services continues to grow and look to the future, we wanted our name to accurately reflect our current and future offerings, and keep ties to our long history in senior care and living,” Martha Tambarrano, chief executive officer, said in the release. “With our new name, we hope to continue to provide older adults of all economic means with a variety of health care and living options.”

In celebration of this announcement, ECS has made a donation of historical artifacts from the Scripps Home to the Altadena Historical Society, the release said. Included in the donation were community and resident pictures, donor records from the 1920s and 90 years of newspaper articles documenting the Home’s involvement with the Altadena community. Volunteers from ECS will assist the Altadena Historical Society in cataloguing and indexing the artifacts, to be known as the Scripps Home Collection. The materials will will eventually be available for viewing online.