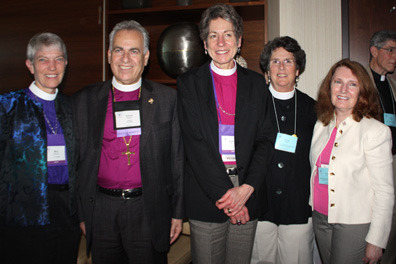 Bishop Mary Glasspool of Los Angeles, Bishop Suheil Dawani of the Episcopal Diocese of Jerusalem, Presiding Bishop Katharine Jefferts Schori, and the Rev. Deborah Dresser and Anne Lynn, president and executive director, respectively, of the American Friends of the Episcopal Diocese of Jerusalem, attended a reception in Dawani’s honor at the J.W. Marriott in Indianapolis in July 5. The event was hosted by Bishop J. Jon Bruno of Los Angeles (represented by Glasspool), the presiding bishop and AFEDJ.

“Bishop Bruno and I are very grateful for your concern and interest in the Diocese of Jerusalem, ” said Presiding Bishop Katharine Jefferts Schori at an evening reception she co-hosted in partnership with Los Angeles Bishop J. Jon Bruno and the American friends of the Episcopal Diocese of Jerusalem.

“We hope that we can encourage this church to be supportive of the Bishop of Jerusalem in his very difficult ministry there. We are searching for a just solution for all people there and we continue to believe that that’s about a two-state solution, that it’s about all of the people of the land of the holy one … and our interference is not helpful.

“Our job is to be supportive and encouraging for people who are living on the ground there,” she said. “I really crave your support in that direction. I crave your prayers and support for the ministry of the Diocese of Jerusalem.”

Positive economic investment in Israel-Palestine is of utmost importance especially for Al Ahli Arab Hospital, Gaza, which is seeking, as an institution of the Episcopal Diocese of Jerusalem, to meet more than a $1 million annual budget shortfall created by cuts in the hospital’s funding.

Dawani told the gathering that the diocese has no intention of closing the hospital, even though it recently lost funding sources, a decision he called “political.”

“It had to do with the situation in Gaza itself,” Dawani told the gathering of about 100 at the JW Marriott Hotel in Indianapolis. “We are the only Christian institution in that region and we have no political affiliation. We serve everybody, regardless of their religion, race or language. The hospital is open to everybody.”
“We believe that our work in Jerusalem is your work as well,” Dawani said. “Our institutions are your institutions because we are the Body of Christ and what we are doing there is really a continuous witness to the living Lord, especially in the land of the Resurrection.”

He said the hospital has a staff of about 120 and no patients currently. But he added emphatically: “I tell you that we are not going to close the hospital.”

The hospital must remain open, he said, because its services are needed in the community especially a new women’s cancer unit, because the staff depends upon it to earn a living, and because “it is our Christian witness,” he added.

Los Angeles Bishop Suffragan Mary Glasspool reiterated the importance of positive investment in Jerusalem, announcing amid applause that the AFEDJ “had sent a $50,000 check today to the Al Ahli Hospital in Gaza.”

Glasspool, representing Bishop Bruno and the Diocese of Los Angeles, which shares a companion relationship with the Diocese of Jerusalem, said that Bruno had written, in absentia, General Convention Resolution B017 (www.generalconvention.org/resolutions/download/348-1341489690), calling for support for the hospital.

Phoebe Griswold, past AFEDJ president, whose husband Frank is the retired 25th presiding bishop of the Episcopal Church, agreed. “The way Bishop Dawani expands our sacred language is so important, bringing understanding in the life of the Anglican communion. Our greatest charism as the Episcopal Church is to be part of a global Body of Christ and to listen to one another.”

The Rev. Deborah Dresser, from the Diocese of New York and the AFEDJ board president, said, “The gathering was filled with excitement of hearing from Bishop Suheil and our presiding bishop. What we gained was a sense that we together as a church can address the needs of our brothers and sisters in Palestine and really strengthen the community for a future state.”

“As you know this work is incredibly difficult and it’s also vital,” she said. “It takes each of us in our own particular way and all of us together to work toward a solution and we’re grateful to each of you for your role in making that a reality.

Dawani said the diocesan mission is to serve as “a bridge” between the faiths as well as to serve and support the community.

He noted that St. Luke’s Hospital in Nablus is doing well, and is at a break-even point after receiving assistance from Episcopal Relief and Development during its first two years of operation.

Diocesan-operated schools recently have graduated more than 400 young men and women, he added. “Education is very important and we continue to be a Christian presence, a bridge for others. Our presence there means a lot for many people, Jews as well as Muslims,” he told the gathering.

“We hope that you will come and see us, come and visit our parishes because partnerships means that we are one in our work and in our ministry.”

— The Rev. Pat McCaughan is a member of the Episcopal News Service’s General Convention team. Bob Williams is canon for community relations for the Diocese of Los Angeles.