The Rev. Canon George Woodward III, rector of St. Edmund’s Church, San Marino, has been appointed as canon for pastoral inclusion for the Episcopal Church of El Salvador, Bishop Martin Barahona of the Central American diocese announced in a letter on Nov. 20. 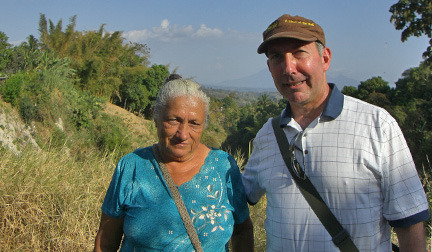 George Woodward poses with Carmen Milagro Flores, a leader of one of the Anemona communities in El Salvador, which sprang up after a hurricane destroyed the previous homes of about 168 families. Cristosol has been active in assisting the villagers obtain legal status and basic services.

Woodward will continue as rector of St. Edmund’s and a priest of the Diocese of Los Angeles, but will advise Barahona and the Diocese of El Salvador on how to foster greater inclusion for three groups: the physically handicapped, the LGBT (lesbian, gay, bisexual and transgender) community and youth at risk. He will be installed as a canon on January 18, 2014 at 4 p.m. at San Juan Evangelista Anglican Church in San Salvador. Clergy and lay members of the Diocese of Los Angeles are invited to attend.

Barahona made the appointment with the consent and support of Diocese of Los Angeles Bishop J. Jon Bruno, who named Woodward an honorary canon of the Cathedral Center of St. Paul in 2011.

Woodward serves as chair of the Diocese of Los Angeles’ Program Group on Global Partnerships, which oversees the diocese’s companion relationship with the Diocese of El Salvador. He has for many years advised and advocated on behalf of the Episcopal Church in El Salvador.

“Bishop Barahona has developed strong initiatives related to gang abatement and at-risk youth, with the Ministry of Sexual Diversity and with physically challenged individuals,” Woodward told The Episcopal News in explaining his new role. “My task will be in fair measure to raise the flags of those concerns as they pertain to El Salvador here in our diocese, and in the larger Episcopal Church.”

Models already in place in the Los Angeles diocese and the wider Episcopal Church will be helpful to El Salvador, he said. “We have in our diocese strongly developed ministries in each of these areas, and a sharing of our insights in accompaniment with the nascent Salvadoran endeavors would come as great encouragement and practical assist to the Church in El Salvador,” he said.

He hopes to draw other church members into this ministry, he says. “A successful fostering of collaborative effort between Episcopalians here and the Diocese of El Salvador in each of these focus areas, promoting exchange and deepening opportunities for accompaniment and shared formation, will, I think, appeal to many of our folk here in L.A.”

Woodward is also a board member and vice president of Foundation Cristosol, an independent Episcopal-Anglican organization that supports the work of the church in El Salvador, especially on human rights and development issues.

“Bishop Barahona’s recent initiatives are also focus areas for Foundation Cristosal, so I am in good hope that overlapping efforts will make for a strong weave of shared endeavor between church and foundation,” he told the News. “Cristosal’s Human Rights and Legal Assistance Office works with the physically challenged and with the LGBT community, and social business initiatives and community development target at-risk youth.”