The Rev. John Taylor was elected bishop coadjutor of the Diocese of Los Angeles on the eighth ballot Dec. 3 by delegates gathered for the 121st annual meeting of the diocese at the Ontario Convention Center. 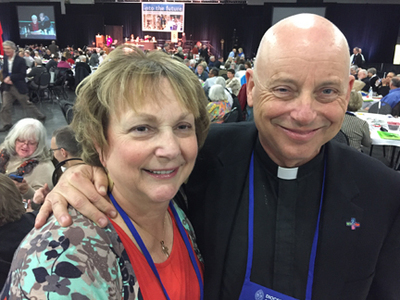 Taylor, 62, has served as vicar of St. John Chrysostom Church and School in Rancho Santa Margarita, California, since 2004. He was elected by 122 votes in the clergy order and 194 votes in the lay order.

The election culminated a nearly two-year search process. Los Angeles Bishop J. Jon Bruno announced during his address to convention that he will retire at the beginning of Diocesan Convention 2017.

Additional information about the candidates may be found here.

A lifelong Episcopalian, Taylor was born in Detroit, Michigan in 1954, the son of journalists and formerly served as chief of staff to former President Richard M. Nixon and later as the executive director of the Nixon Library.

He received a bachelor’s degree in political science at the University of California, San Diego, and a master of divinity at the Claremont School of Theology and Bloy House. He is a graduate of Phillips Academy, Andover, Massachusetts.

He was ordained a priest in January 2004 and also served as curate at the Church of St. Andrew the Apostle in Fullerton.

Taylor has written two novels, Patterns of Abuse and Jackson Place, numerous newspaper and magazine articles and a blog, The Episconixonian.

Taylor married Kathleen Hannigan O’Connor in 2002 (pictured together above); he has two daughters, Valerie and Lindsay, and two stepchildren, Daniel and Meaghan.

The Diocese of Los Angeles encompasses some 70,000 Episcopalians in 136 neighborhood congregations and mission centers, some 40 schools and 15 other specialized service institutions located in six California counties. Los Angeles historically is one of the five most populous and culturally diverse of the Episcopal Church’s 109 dioceses.

Pending the canonically required consent of a majority of the Episcopal Church’s diocesan standing committees and bishops with jurisdiction, Taylor will be ordained and consecrated as bishop coadjutor of the Diocese of Los Angeles on July 8, 2017 at the Dorothy Chandler Pavilion at the Music Center in Los Angeles.