When U.S. President Woodrow Wilson and his wife, Edith, arrived unexpectedly at L.A.’s St. Paul’s Pro-Cathedral for the 11 a.m. service on Sunday, Sept. 21, 1919, they heard not only Dean William McCormack’s sermon, titled “God’s Formula for Despondency,” but also the uplifting strains of the church’s impressive Murray Harris pipe organ, then in its eighth year of service to the congregation. 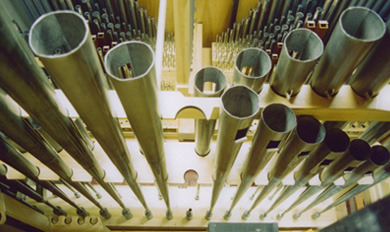 A bird’s-eye view of some of the original organ pipes, installed in 1911 at St. Paul’s ProCathedral, Los Angeles.

Wilson may have needed a spiritual boost at the time. The previous day he had addressed some 7,000 Angelenos assembled in the Shrine Auditorium as part of his three-week, 9,981-mile speaking tour to galvanize U.S. support for the League of Nations, which Wilson championed. The United States never joined because Congress failed to ratify the Treaty of Versailles after World War I.

Organ builder Harris also knew something about stalled projects. Harris — like Wilson, the son of a Presbyterian minister — was ousted from his own business after cost overruns and litigation beset his construction of what was then the world’s largest pipe organ, built for the 1904 St. Louis World’s Fair, and later installed in Philadelphia’s Wanamaker department store. There it was first played on June 22, 1911, reportedly at the same moment when England’s King George V was crowned in Westminster Abbey. 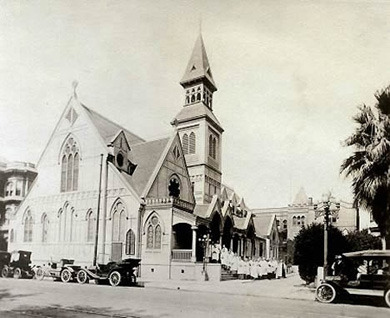 So bold and mechanically innovative were the Harris-built organs that even the pro-cathedral’s seasoned choirmaster Ernest Douglas – first dean of the American Guild of Organists’ Los Angeles chapter – may not have fully realized the power of the pipes in his requisition for St. Paul’s not-large wooden sanctuary, built in 1889 on Olive Street, a site now occupied by the Biltmore Hotel.

“Douglas ordered an organ way ahead of its time,” longtime L.A. organ builder Manuel Rosales said in a recent interview. “We can’t imagine what that organ sounded like in that small frame building. It must have shaken every window in the place,” especially since it was the first in the city, and perhaps the nation, to boast a 32-foot Bombarde stop.

Rosales – whose “Opus 24” was built for the Walt Disney Concert Hall as a joint project with Glatter-Gotz Orgelbau of Owingen, Germany – first came to know the Murray Harris organ in its second home, St. Paul’s Cathedral, which opened at 615 S. Figueroa in 1924. Rosales then played key roles in the pipe work’s preservation and later its installation in St. James’ Episcopal Church, Wilshire Boulevard, as part of the David John Falconer Memorial Organ that debuted in 1995 thanks to careful planning and a significant grant from the Ahmanson Foundation. 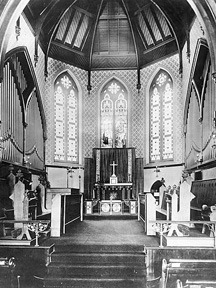 The interior of the old St. Paul’s Cathedral, located on Olive Street in Los Angeles.

The Veteran’s Day weekend re-dedication recital set for Nov. 13 is aptly timed for an instrument that emerged by surviving moves to three buildings, numerous battles preventing its demise, and the tragic murder of one of its greatest advocates –St. James’ previous organist-choirmaster David John Falconer, who died in 1994 when robbed outside a Los Feliz store.

And for the 1919 first commemoration of Veterans Day, so declared by President Wilson, the Murray Harris organ in St. Paul’s Pro-Cathedral was indeed played in commemoration — as it was for Armistice Day 1918 – the same year that downtown’s Central Park was renamed Pershing Square in honor of the general who led the allied forces to prevail in World War I. 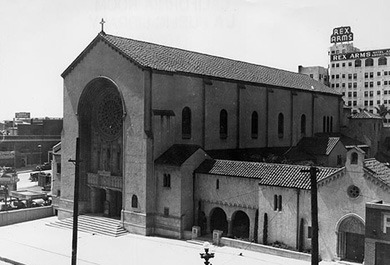 St. Paul’s Cathedral, opened in 1924, was on Figuroa Street in Los Angeles.

“So, what we have at St. James,” said Rosales, “is an instrument that preserves the sound of the Murray Harris organ and enhances it with additional voices that expand the musical possibility to a level not even dreamed of by pro-cathedral choirmaster Ernest Douglas.”

Continuing next week: Links to Part 2 of this article – tracing the next chapters in the organ’s history — will be posted next week on the Episcopal News website and linked to the Nov. 20 Update. “As every organist knows,” says St. James’ current music director James Buonemani, “organs are never really completed, but like a living organism, they evolve and are always a work in progress.” 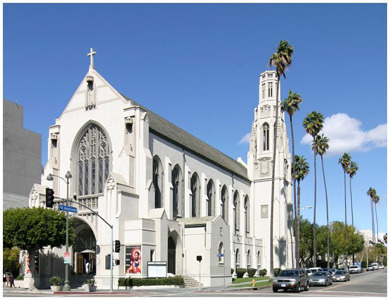 To hear the organ, click on the links below:

For more selections, click here and scroll down the page.

More about the organ’s history is here.