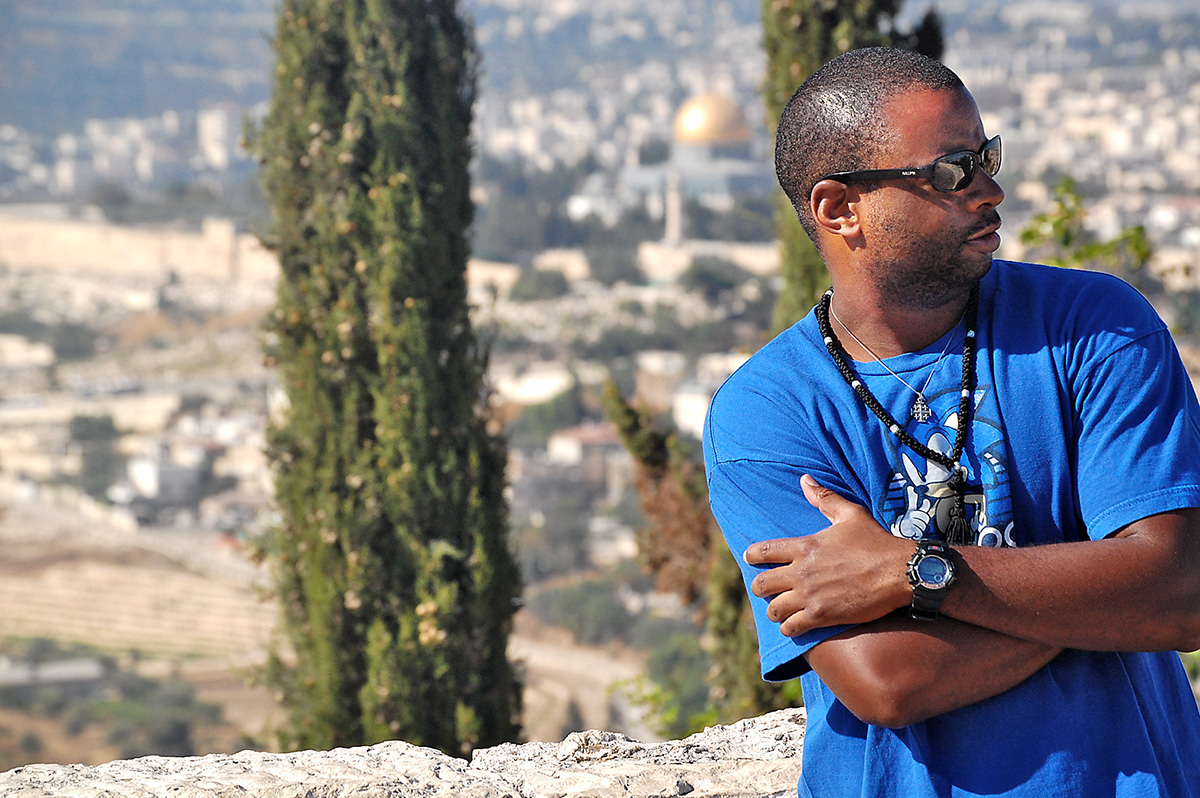 Shawn Evelyn, seminarian from the Diocese of Los Angeles, is pictured during a pilgrimage to the Holy Land. He has helped to lead several such journeys, one of many ministries he has carried out while discerning his call to the priesthood. Photo / Chris Tumilty

For much of Shawn Evelyn’s young life, friends and family members observed his active participation in ministries, both at St. John’s and St. Philip’s in Los Angeles, and advised him to pursue priestly ordination.

“Every time I heard that, I wanted to run away,” recalled Evelyn, now 36 and preparing to enter his third and final year at the Virginia Theological Seminary in Alexandria.

Even though he served at his local parish as an acolyte, lector, lay eucharistic minister and as a lay preacher. And although he assisted with the diocesan Program Group on Youth Ministry, facilitating youth activities and convention involvement and even at the church-wide General Conventions in Anaheim (2009) and in Indianapolis (2012). He also was appointed to the Executive Council Committee on Science, Technology and Faith.

There is a multitude of other associations, too. Evelyn helped lead and chaperone diocesan youth Holy Land pilgrimages; was part of retired Bishop Jon Bruno’s signature “Hands in Healing” cross-country van tour in 2002, and attended an “Am I Called” vocational discernment conference offered through the Episcopal Church to raise up young clergy of color.

“Everything he did was so positive,” Moodie said. “He really jumped in there and did everything he could. And he was absolutely fabulous at it. He was loving all parts of it. He loved ceremony and tradition. He was a member of the Commission on Black Ministries and the diocesan Union of Black Episcopalians, too.”

For Moodie, a member of Evelyn’s lay discernment committee at St. Philip’s, Los Angeles, it was obvious her son’s best friend was being called to ordained ministry.

“The way that Shawn grew, every step he took, led to something better, something more that fed his soul so much more. He’s been a great leader, the most positive person. This is what he was meant to be, it’s just in his soul.”

“I had the privilege of working with Shawn while he wrestled with the idea of ordained ministry,” said Chris Tumilty, who recently concluded eight years as diocesan missioner for youth. “Despite the immense impact Shawn was having on hundreds of youth and young adults through his lay ministry, he struggled with committing to a discernment process. I think Shawn looked around the church and saw a clergy body that he felt he didn’t fit into — a college of theologians and spiritual professionals who know nothing of his personal cornerstones” such as popular-culture television, video games and rap music.

“What is exciting to me about Shawn is that he will be new kind of priest,” said Tumilty; “a priest who fits into a new type of church that fills people in the old ways — with love, faith, and service for the world.”

For reasons both systemic and complicated, for Evelyn there was a universe of difference between his church activities and all the steps toward the priesthood. He just couldn’t see himself as a priest.

“I was a young man, trying to find myself in this world,” he told The Episcopal News. “I heard this was an option but it didn’t sound very attractive at the time. Telling somebody to go to seminary, or ‘you should be a priest’ is different than asking what they think of the church and helping to guide them,” he said.

Support from the Union of Black Episcopalians

“There has been a shortage of Black clergy for the last few years, of which we are painfully aware, since it directly impacts the vitality of historically Black congregations,” Buchanan said.

Even with “concerted efforts in the church to address this issue, such as the Why Serve Conference, this problem still persists.”

UBE, along with the Rev. Ronald Byrd, Episcopal Church missioner for Black Ministries, is addressing the issue by connecting with deans of seminaries and local congregations to advocate for intentional outreach to Black young adults.

Additionally, “finances are a major concern for this population and we are using our communication platform to share the information on availability of scholarships for tuition, as well as reminding folks in the pew to encourage, support and sponsor young adults,” Buchanan said.

The issue is complicated and complex, part of the larger challenges of: retaining young people within the church; addressing demographic and cross-cultural shifts; financing full-time clergy positions and empowering young people to envision themselves as church leaders.

“If we’re trying to recognize that we need to be preparing for the church of the 21st century, we have to do a lot more in multicultural and multilingual congregations to ensure the Kingdom of God reflects all the diversity God’s created,” Leemhuis said.

And while Bishop Suffragan Diane Bruce’s community walkabouts have familiarized many churches with their immediate surroundings, it is up to those congregations to follow through and to make real connections with their neighbors, who often don’t resemble those sitting in the pews, he said.

“I’m so glad Shawn had the opportunity to go to a residential seminary in Virginia,” he said, adding that he hopes more young people of color will be able to do likewise.

While the problems are critical and multi-layered, “the good news is, it’s still not too late,” Leemhuis added.

“We can create a strategic plan to address it. The question is, what are we going to do with the time we have?”

The Rev. Glenn Libby called Evelyn “an outstanding Episcopalian” and said that St. Philip’s was delighted to sponsor him in the process for ordination.

“It is a rare thing for that age group to want to make that kind of commitment to the institutional church,” said Libby, St. Philip’s rector and USC chaplain.

“That’s sort of counter-cultural now in certain ways and so … it’s important to create opportunities and to have spaces where people can find their own way into it, where they’re free to experience things.”

Libby said that St. Philip’s has made a concerted commitment to “do our part to raise up young people and to nurture vocations particularly, Black and Latino vocations because of the communities we serve.”

He recently began a lay discernment committee for an African American youth who attends USC and St. Philip’s. That committee is operating without “any thought that he’s supposed to be a priest. It is trying to help him discern what God wants him to do. This is true discernment, with wide-open options about whether it will be a lay vocation or a deacon or priest.”

He added, “We’re excited, whatever the outcome of it; excited to be doing what we can to support people in their discernment.”

A vocation for ministry

As for Evelyn, vocation eventually caught up to him.
“I began to realize that everything I’ve been doing has been connected to this, in some way. It’s been ministry in some shape, form or fashion.”

He traces his family’s roots to the Anglican Church in Guyana, where he was born in 1981. The family moved to Los Angeles when he was just six years old, and joined St. John’s.

He attended local schools and, in addition to his church activities, worked in the customer and food service and Internet sales industries. While serving on the Executive Council Committee on Science, Technology and Faith, he attended a gathering at Virginia Seminary and felt the first tugs of a call to the priesthood.

“I kept saying I could see myself here. I didn’t know what that meant at the time,” he recalled.

“It got me to change my thinking and the more I thought and prayed about it, it was just more of a realization, an affirmation that this is something I’m supposed to be doing. That I’m at the right place at the right time, doing what I was called to do.”

Seminary has been challenging and affirming, he said; “a great experience for me, and I’m learning a lot.” He sees the potential to change lives and looks forward to his senior year, and then to whatever else God has in store for him.

“I would like to go anywhere,” he said, in terms of a ministry focus, post-graduation and post-ordination. “I’ll do anything to support the mission of the church. If I am called to a historically Black congregation, I would love to be able to help enrich the community and the parish.

“Historically, Black parishes are essential to the dioceses that have them,” he added. “Our populations are changing and I feel we need to educate the church on the importance of historically Black churches.”

He added, “Maybe someone else can see what I’m doing and be inspired and know there’s a lot of good to be done,” he said. “There’s a new generation out there that just wants to do good in the world,” he said. “There’s real effective change that could happen in the church, a lot of people think on a large level but it all starts with the people around us.”

He will return to Los Angeles in October for candidacy interviews with the Commission on Ministry, to determine if he will make the next step forward in the process for ordination.

“Parts of the process have been pretty nerve-wracking and a little scary, but there is something to be said about various communities coming together to affirm and to say yes, that they see something in you and that you’re able to be a part of this and to make a difference,” he said.

He hopes that congregations and individuals will make every effort to support and empower other young people for ministry.

“I was lucky enough for people to see something in me, but it doesn’t happen to a lot of younger people,” he said.” It’s not just seeing somebody active and involved and trying to get them into seminary. It’s helping them to see that this, too, can be an option for them.

“You have to help guide them, to let them know they’re part of this community, that they can do this, if they want to.”