During her seven years as St. James Episcopal School headmaster, Debbi David has consistently beefed up campus security — adding four full-time guards, cameras, special doors and panic bar gates, ‘active shooter’ and other emergency drills, and even air horns in classrooms for teachers to signal loudly if accosted by anyone. 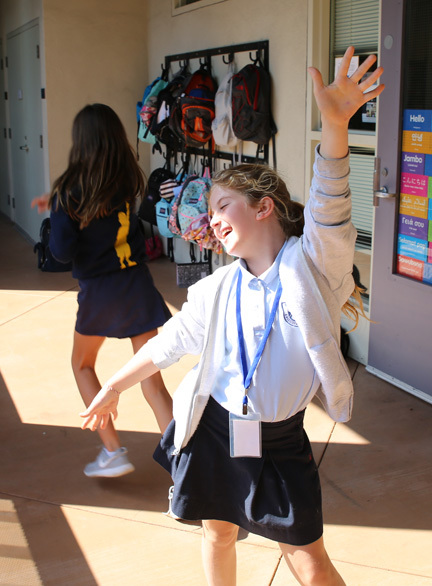 Now, in the wake of the Parkland, Florida, school shootings, the Los Angeles school is wondering about arming campus guards, and about the delicate balance of providing a safe campus environment versus instituting a climate of fear.

“It’s a conundrum,” David told The Episcopal News recently. “You want children to feel and to be safe in their learning environment without scaring them and without giving a false sense of security that one armed guard might provide.”

She and other Southland Episcopal school officials say both prevention and training are key to averting campus tragedies like the Feb. 14 shootings at the Marjory Stoneman Douglas High School, which killed 17 and injured 14 in Florida.

Yet, such incidents are not completely preventable, according to David Bush, chief financial and operating officer at St. Margaret’s School in San Juan Capistrano.

Current plans to shift traffic patterns and access points at the sprawling 1,245-student campus were underway before the widely publicized shootings, as part of ongoing safety evaluations, he said.

“We’ve been moving towards securing and limiting access, to control vehicular and pedestrian traffic when everyone’s on campus. These are basic logistical issues to work through,” he said.

While declining to discuss specifics, Bush said the effort grew out of weekly senior staff and security personnel meetings where disaster protocols and security management are consistently evaluated and improved.

“We’ve landed on what we hope is a very fast and flexible instant management process,” Bush told The Episcopal News recently. “As soon as something is identified, there’s a whole process that springs into action and recognizes the uniqueness of that particular event and tries to respond to it.”

Regular training is helpful but, in any situation “you can’t know how it’s going to evolve, so we try not to have too regimented a procedural training that says you ‘have’ to do it this way,” he said.

Similarly, community awareness is key, especially since most school shooting incidents are neither random nor committed by strangers, he said.

“We have a strong emphasis on knowing the student,” Bush said. “We hope every student is close to multiple adults — to advisors, the dean, teachers, and other children, and [an emphasis on] knowing when they’re feeling good or not, and not just from their academic performance.”

Students are encouraged to communicate and their concerns are taken seriously. Campus signs offer additional resources, including telephone hotline numbers for security, for the school counselor, the school nurse. Calls are handled with anonymity and discretion, Bush added.

While the emphasis should always be on prevention, providing a safe campus environment is a delicate balance, because “you can’t get ahead of your community,” he said. “If you create a level of draconian security that parents don’t feel is appropriate, you will have an empty school.”

For example, he, said,“when we first introduced surveillance cameras 15 years ago, there were a lot of concerns about invasion of privacy. Now, no one cares about cameras. They hope you’ve got them. Socially, we’ve moved to a point where people see them as a friend.”

Efforts focus on ‘prevention and awareness’

At Campbell Hall in Studio City, safety measures include guards, security teams, use of technology and cyber security, and standard disaster training but no ‘active shooter’ drills “because the benefits are not worth the cost.

“We don’t want to terrify the little ones,” said the Rev. Canon Julian Bull, headmaster.

Similarly, guards at the 1,100-student school are not armed. Rather, the focus is on prevention and awareness, Bull said.

After the Parkland, Florida shootings, numerous inquiries regarding the efficacy of active shooter trainings and arming security guards prompted Canon Serena Beeks to advise schools to develop security protocols specific to their individual campus needs and in conjunction with local law enforcement authorities.

This has two significant advantages over any other protocol: first, your plan will be tailored to the actual response you would receive from your local police services,” said Beeks, executive director for the diocesan Commission on Schools, in an email to diocesan school personnel.

“Second, it will serve to make law enforcement agencies aware of who you are, approximately how many students are present and their age range, how best to access various parts of the school, what security assets (cameras, guards) you have on site already, and so forth,” she wrote. “An excellent relationship with local law enforcement and fire officials is always the first and best way to care responsibly for your students.”

Similarly, Presiding Bishop Michael Curry referred Episcopalians to the Episcopal Church Office of Government Relations and to engage “the great debate” about gun violence sweeping the nation and to find “a better way … to keep schools safe, to make our streets safe, to make this country safe for all of God’s children and all of God’s people.”

During that training, “I realized we are dealing with caring and deeply compassionate teachers, who have no idea if they will be called to respond to such incidents, and who were shaken just by seeing the videos.

“We are going to ask them to protect our children and hustle them away while being pursued by a person with a weapon intended for military operations. This is what education has become,” she said. “Your first job is to keep your students alive and your second job is to educate them.

“I look at my young teachers and I understand there is fear in just coming to work. I feel like my job, once they’re here, is to reassure them they are as safe as modern technology and a generous budget can make them.”