‘God is never finished transforming us’: St. Be’s launches with a party for hundreds 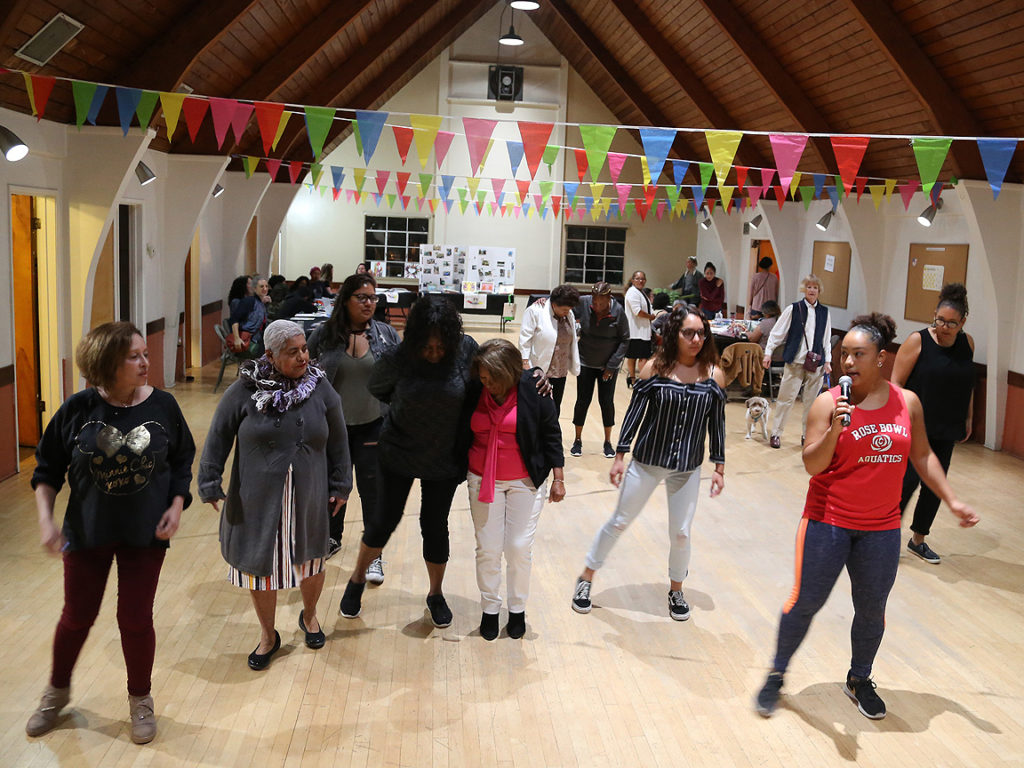 Lauren Cucconello, a member of St. Mark’s, Altadena, teaches a line dance at the St. Be’s launch party on Sept. 28. She will begin holding classes in hip-hop and R&B dance at St. Be’s in October. Photo: Janet Kawamoto

It is a revitalized version of the former St. Barnabas Episcopal Church, which officially closed to worship in 2018 after 104 years of ministry. The new Eagle Rock progressive community drew curious neighbors, enthusiastic parishioners from its shepherding congregation, St. Stephen’s Church in Hollywood and a jubilant Bishop Diocesan John Harvey Taylor. 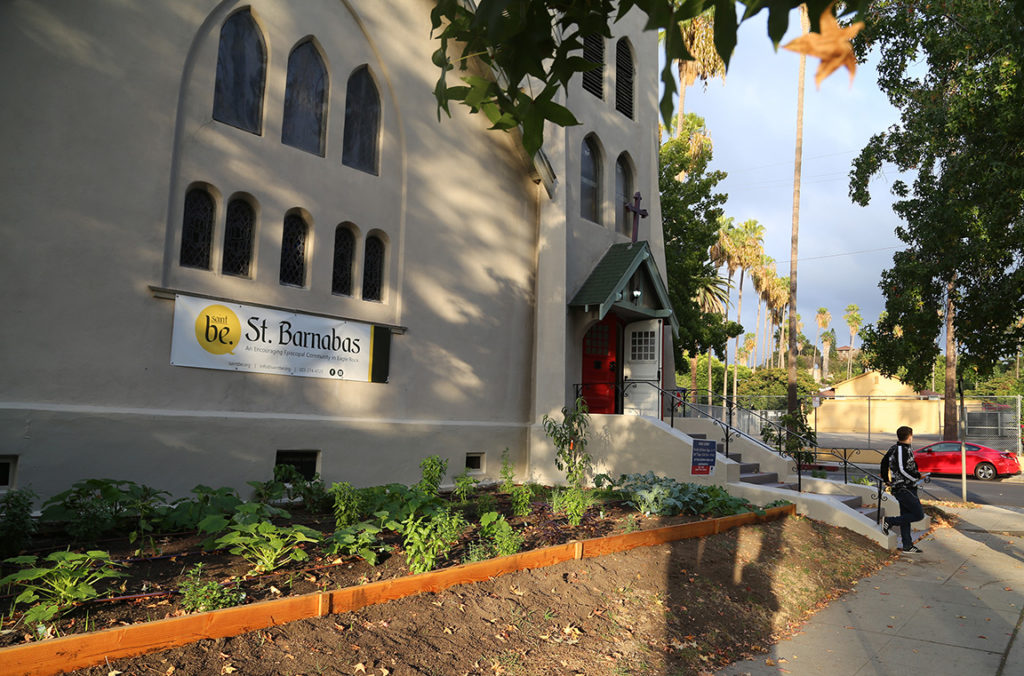 “To be all things to all people is to offer something in the name of Christ to everyone in your neighborhood,” Taylor told The Episcopal News during the party. “Eagle Rock is one of the most dynamic, exciting, diverse neighborhoods in Southern California.

“The Diocese of Los Angeles, for which I speak collectively and lovingly here on this exciting opening night at St. Be’s, believes that the plan that’s in place for ministry here is going to be all things for all people. It’s going to be state-of-the-art worship, beautiful music — traditional music, contemporary music.

“It’s going to be justice and service and welcome and belonging, a community of connection and care. [A place] where people can come and be refreshed by fellowship, by the Gospel of Christ and by the sacraments Christ gave us, and go out into the world and be transformative and bring the kingdom of justice and peace a little bit closer.”

The Rev. Canon Jaime Edwards-Acton, who helped spark St. Be’s revival, said he “was super-pleased by the turnout. There were tons of people, from the diocese, from other churches, neighbors and people that have been curious about us. It was great to see that mix of folks.”

With rain in the weather forecast, there were some last-minute logistical adjustments, moving musicians into the church and tacos under a patio tent, according to Edwards-Acton, rector of St. Stephen’s, which is shepherding the revived congregation. 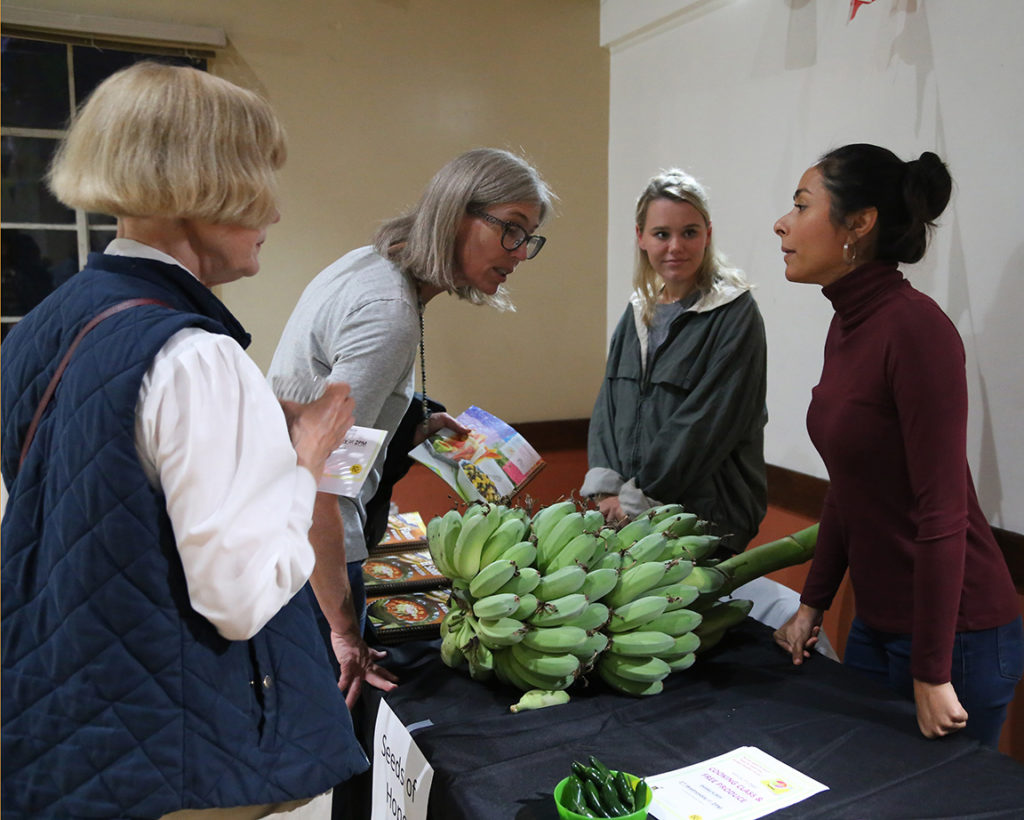 “We made a last-minute decision to move the food. One of the three bands performing was going to be on the patio. But we thought, if it was going to rain, we’d better put the tacos in the center with the tarps over them. It was a good move. The tacos were really popular.”

But the rain held off and the party-goers moved continuously indoors and out.

Outside, the freshly planted Seeds of Hope garden boasted sprouts of spearmint, sage, basil, cilantro, oregano, and other spices, along with squash, poblano peppers and cucumbers.

Inside the church hall, a second-floor mini-ministry fair assembled, with booths representing many of St. Be’s partners: Seeds of Hope, the diocese’s food justice ministry; and the St. Stephen’s Delaney-Wright Fine Arts Preschool, founded in 2004, which intends to create an additional campus at the Eagle Rock church.

A Head Start program remained on the campus after worship ended and is licensed for 22 children. “But, there’s enough indoor and outdoor space there to do a preschool licensed for 50 kids,” Edwards-Acton told The Episcopal News. He hopes to franchise the fine arts school with other churches, if they are interested. 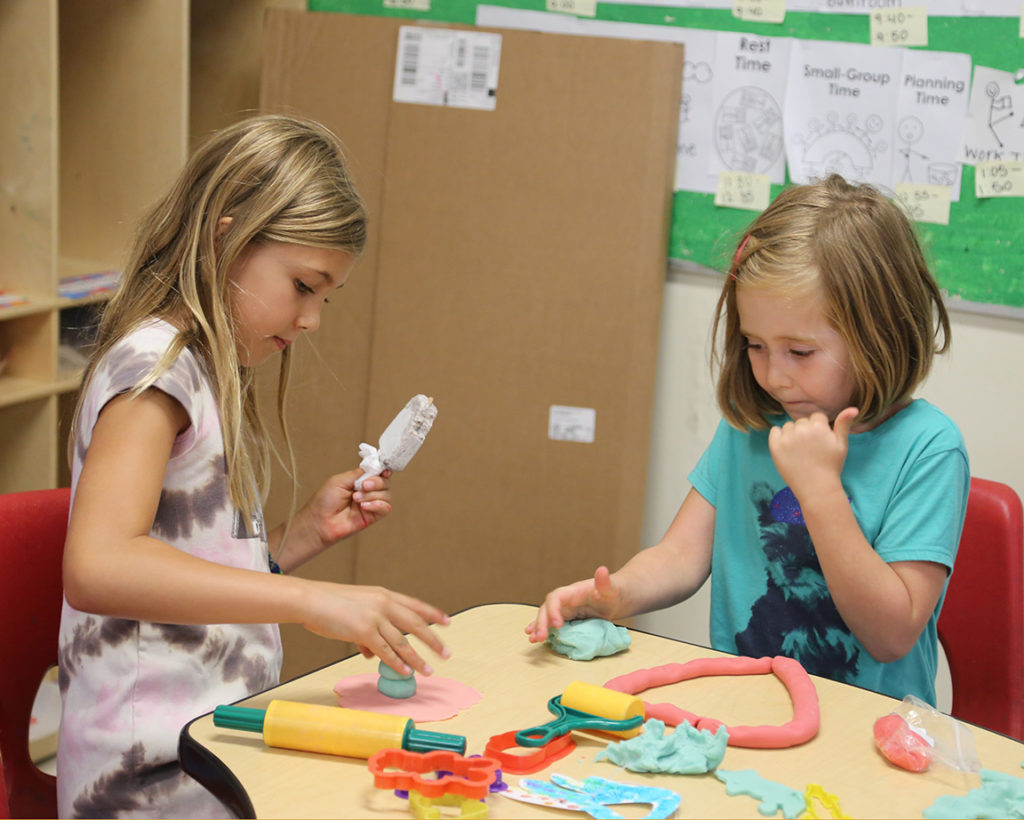 Children enjoy an open house at St. Be’s play space, which may soon house a new branch of the Delaney Preschool that has long been established at St. Stephen’s, Hollywood. Photo: Janet Kawamoto

Brenda Lucas grew up at St. Stephen’s and teaches two-year-olds at its Delaney Wright school. She attended the party to assess space for yet another new assignment.

“Now, I’m going to be a Sunday school teacher here,” she said. “I start tomorrow and I’m excited to meet everyone.”

Dalila Montenegro, also a Delaney-Wright teacher, echoed Lucas: “I am so excited to be here. I was here when they held the first bible study. It’s so wonderful to work with Fr. Jaime to make this place grow and flourish.”

She hopes to bring the preschool to Eagle Rock also. “We are going to do school here, too, whatever God decides,” she told The News. “It’s exciting to create a new community. Fr. Jaime has a way to make you part of his dream and vision.”

“I’m excited to help the church start out,” an enthusiastic Jenkins told the Episcopal News. “Jaime is very passionate about it, and it’s easy to catch that enthusiasm, and I want to help in any way I can.”

Visitors to the parish hall were invited to design origami creations and Lauren Cucconello wooed participants to join her in some of the hip-hop and R&B line dances she will begin teaching in the space some Saturdays in October.

Cucconello, 15, a St. Mark’s, Altadena parishioner, shared the energy of helping to create new community. “I’m really excited to be here,” she said. 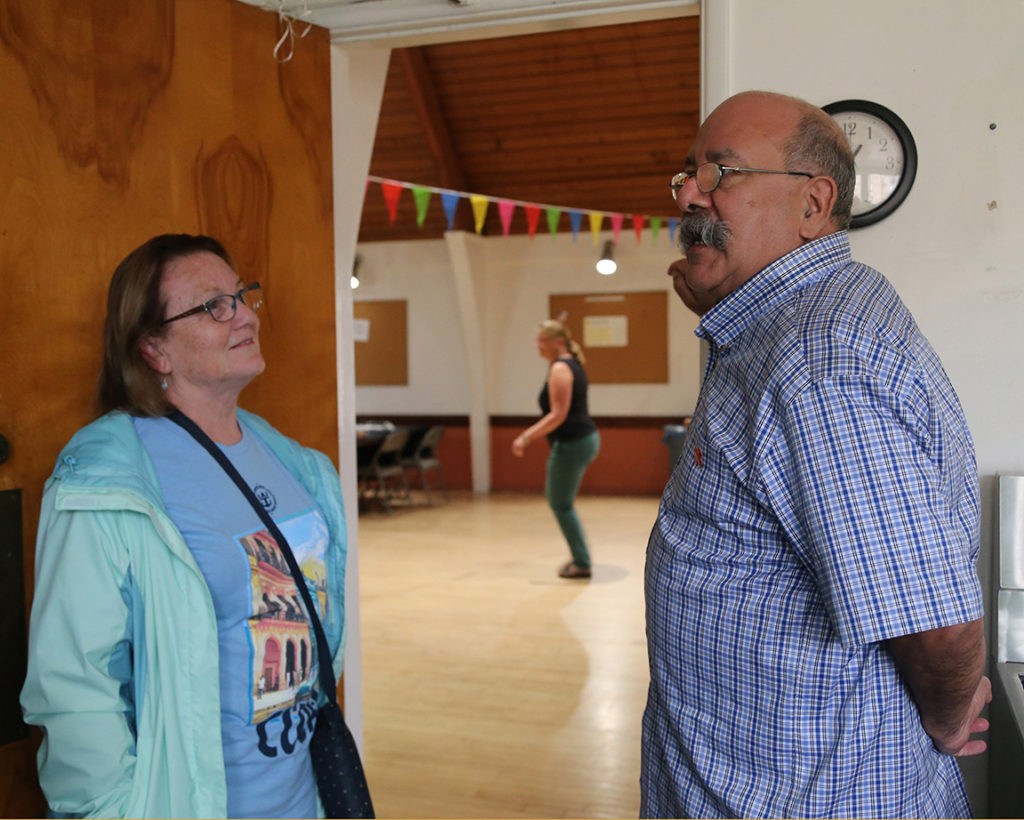 Jennifer and Dave Moreno, former members of St. Barnabas’ Church, reminisce about the years they spent there. They are enthusiastic about the new launch of St. Be’s. Photo: Janet Kawamoto

She told The News that the energy St. Be’s has brought to the neighborhood is inspiring and that she was “excited for the community and for all that’s going to start unfolding at St Be’s.”

For David and Jennifer Moreno, former St. Barnabas parishioners who live in Glendale and now attend All Saints Church in Pasadena, the party brought back lots of memories.

“I had my first communion here,” Moreno told The News. “When I was a kid, we had a lot of activities here. There was a basketball court. After school, this is where we’d come and hang out.”

Jennifer Moreno remembers a legacy of community closeness, such as the “daddy shower” thrown for Dave before the birth of their second child. “It was great fun. A small church,” with a range of older members and young families, “and very tight-knit,” she said. 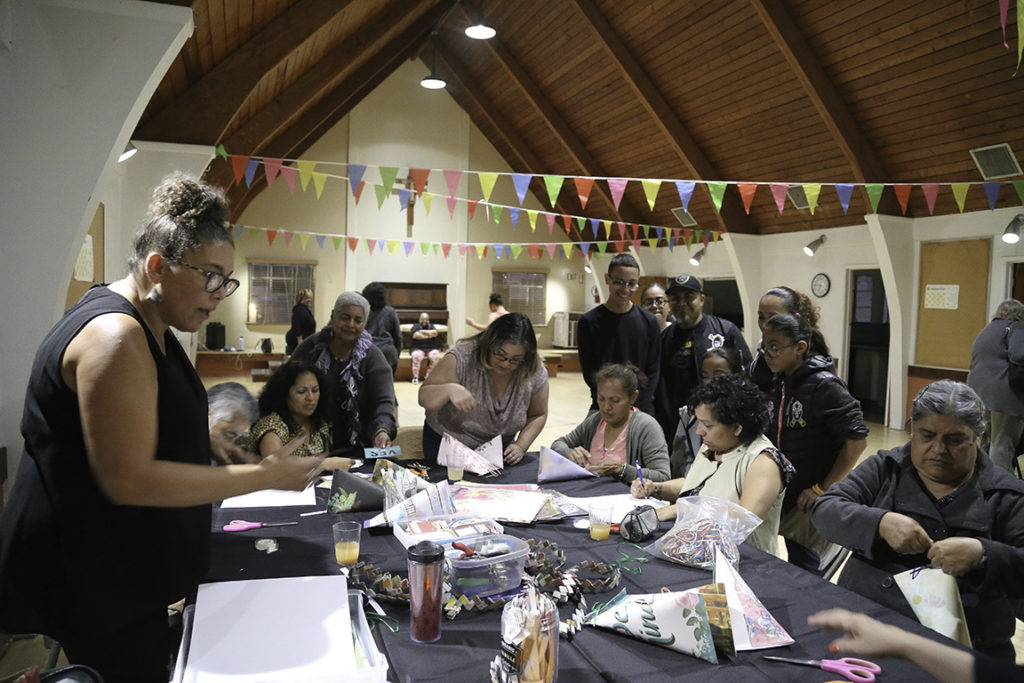 The couple saw the St. Be’s party invitation on Facebook “and we both [said], we want to go see what’s happening,” Dave Moreno said. “I am so glad St. Stephen’s is shepherding this place. We are hoping they will get a congregation going, and get to mission status, and get to be a parish. I’ve seen a lot of people with kids here tonight, and that’s great.”

Heather and Eddie Alonzo live nearby and attended the party hoping to find out more about preschool opportunities for their ‘almost two-year-old,’ also named Eddie. “We heard about it through a friend and we wanted to come and check it out,” she said.

Daniel Vasquez, 19, staffed the Jubilee Jump booth. He is a lead coach for the effort, part of the Jubilee Consortium, a collaboration of Episcopal churches formed in 2001 to provide leadership and enrichment programs to local communities.

“Our main purpose is to build up community with kids. Competitive jump rope helps them exercise and learn, and it’s entertaining. It’s open to ages 8 to 16 and we’ll be here every week 5:30 p.m. to 7 p.m. on Tuesdays,” said Vasquez.

The following day, about 45 people attended bilingual worship services at 4 p.m. “Everyone spontaneously broke out in applause at the end of the service,” Edwards Acton recalled.

“One of the greeters for the service lives next door. He didn’t grow up going to church, but he’s been joining us for bible study and he volunteers at St. Be’s. He had a grin from ear to ear.

“We are hoping the larger Episcopal community will participate,” Edwards-Acton added. “We are inviting them to be a part of this. I’m hoping folks will consider visiting us on Sundays at 4 p.m. for worship. It’s a time when we don’t conflict with too many other church services. If you want to be a part of helping to make something grow and thrive.”

Taylor said the new congregation is a testimony to God’s demonstrable activity. 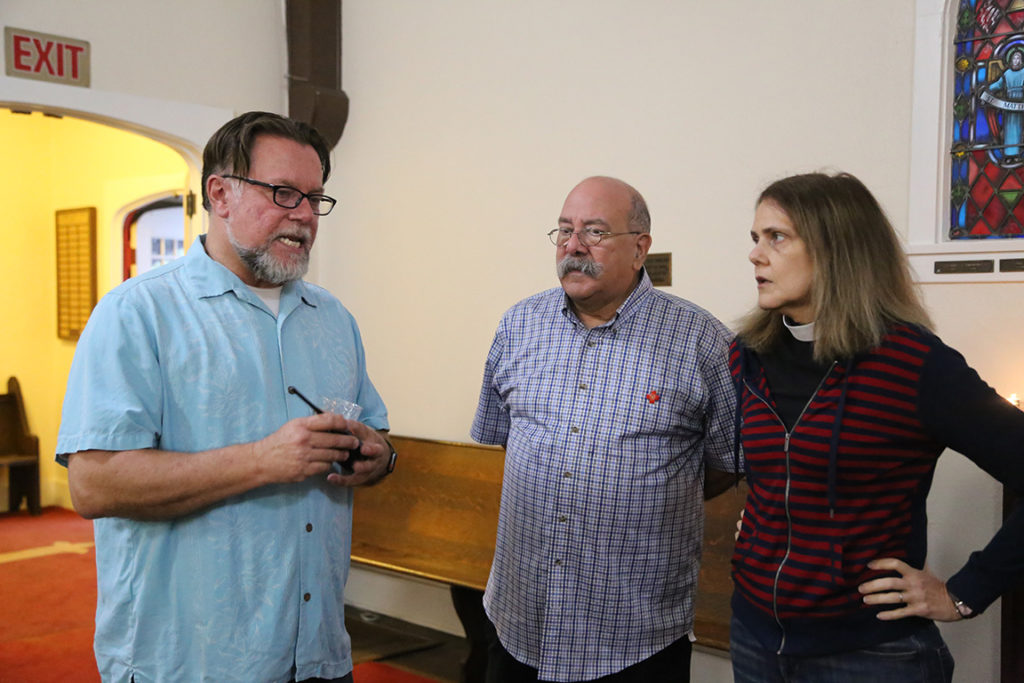 “There were people here who were faithful, their children were baptized here. The Gospel was preached here. There were confirmations. They loved this church and cared for this church and finally decided their ministry was done. That was a little over a year ago and it was a sad time for our diocese.”

But this party, this new expression demonstrates that “God is never finished with us. That it’s not our church. It’s God’s church. And God planted seeds of resurrection and renewal here that have been watered by Jaime and all the faithful ministers around us here who are bringing this ministry alive,” said Taylor.