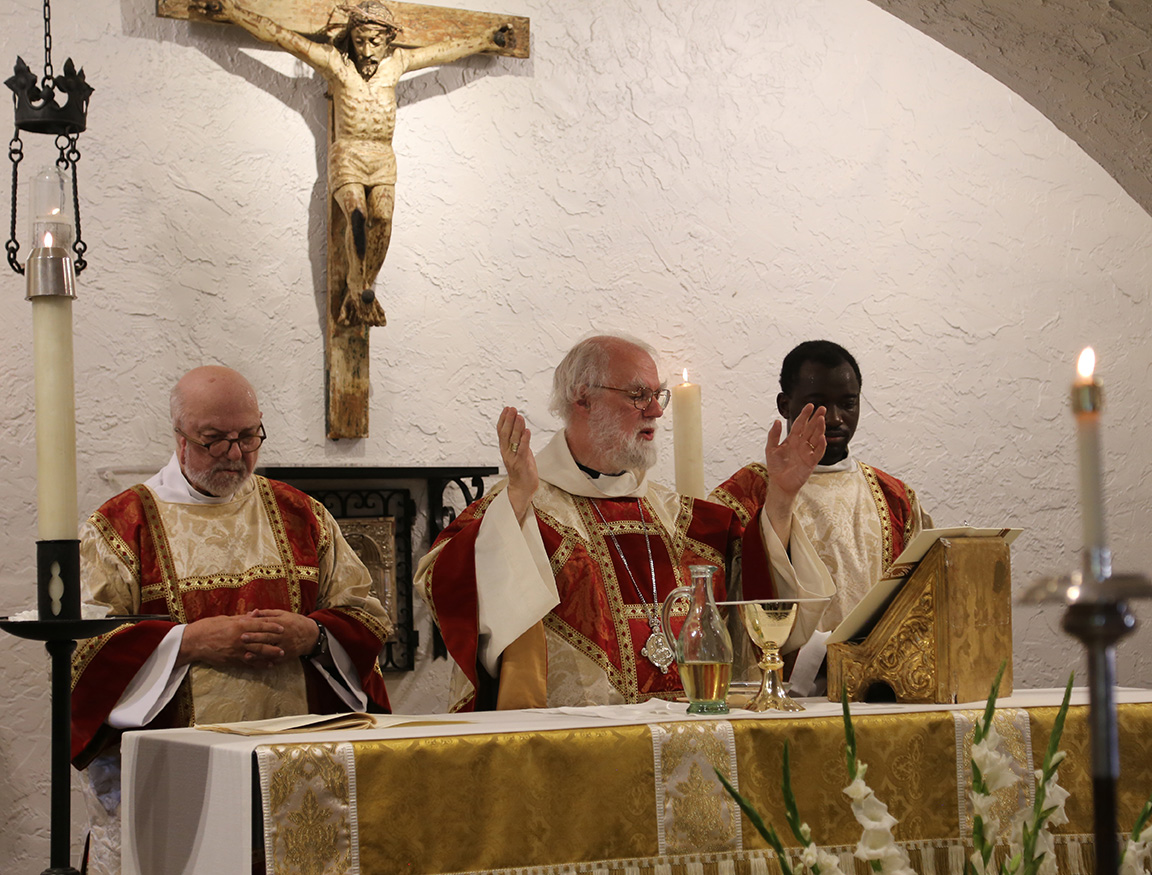 THE RT. REV. ROWAN WILLIAMS, 104th Archbishop of Canterbury, invoked the image of congregations as “mothering churches, places where new birth happens” while preaching Sept. 22 to an overflow gathering at the 100th anniversary celebration of the Parish of St. Mary in Palms.

Recalling the Virgin Mary, the church’s patron saint and “the mother of the moment,” Williams said that churches, regardless of size, offer “a series of new births” as people are awakened, enlarged and enlightened. 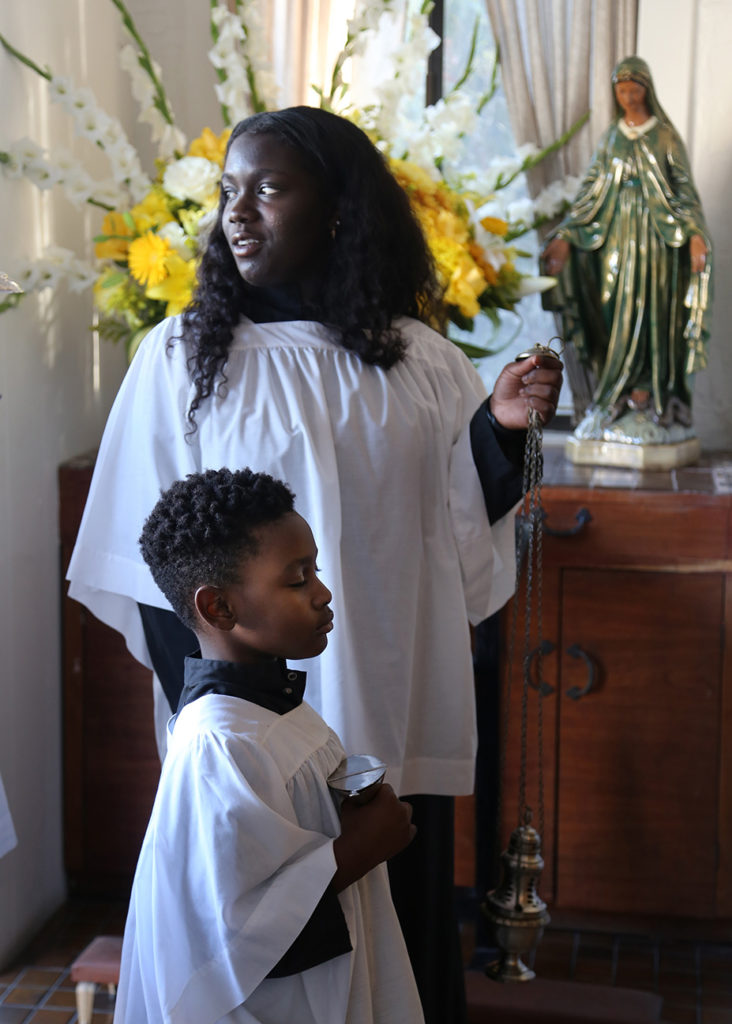 A thurifer and her assistant prepare to enter St. Mary’s in Palms for its centennial celebration service on Sept. 22. Photo: Janet Kawamoto

“It all happens here,” he told the enthusiastic gathering. “Finding that it is, as you might say, larger on the inside than the outside, that there is always more to discover of the mystery of love and call to renewal and service.

The Solemn Pontifical Mass for the Anniversary of the Dedication of a Church was the third in a series of weekend centennial celebrations of the parish, known for its Anglo-Catholic style of worship.

Los Angeles Bishop John Taylor, also present at the gathering, said: “Rowan’s message in his gracious homily was that the work of the baptized person is to live out their life for the sake of feeding and nurturing their neighbor. He surely did just that for all of us in the Diocese of Los Angeles by coming all this way to particulate so generously in the centenary of St. Mary in Palms.”

Earlier in the day, Taylor had preached and presided at a bilingual mass commemorating the feast of the Nativity of the Blessed Virgin Mary. A solemn evensong also was held Sept. 21, followed by a church feast, featuring African delicacies of goat stew and fufu, typically made with cassava and green plantain flour.

“St. Mary in Palms has a long history of engagement with sisters and brothers across the Anglican Communion,” Taylor said in remarks included in the worship bulletin. “From deep connections with clergy from Africa and the Order of the Holy Cross, to the prayer station that was in place here for Anglican envoy Terry Waite, minds and hearts have been lifted through the years in partnership across the Anglican Communion’s ‘bonds of affection’ in service to our Lord.”

The Rev. Vincent Shamo, St. Mary’s rector, prompted laughter when welcoming several hundred worshippers who packed the church. “I plan to be here for another hundred years,” he said.

Shamo later told The Episcopal News that in 1917, when inquiries were first made about starting a church, the conclusion was “that nothing was possible here. But by the faithfulness of the community, and by God’s grace, what was impossible God has made possible, so we can celebrate 100 years.” 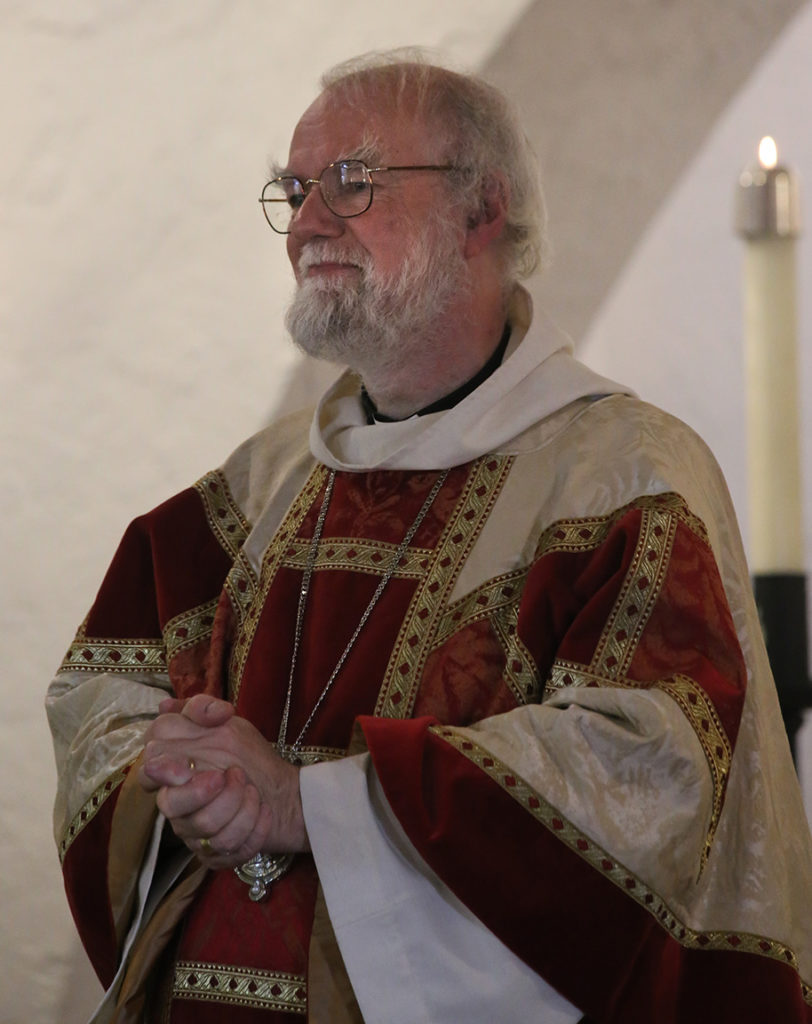 The parish traces its roots to a group of Episcopal laywomen who called themselves the St. Mary’s Guild and in 1919 petitioned then-Los Angeles Bishop Joseph Horsfall Johnson to begin a mission congregation.

The following year, in July, the bishop created a mission attached to the parish of Santa Monica. A tract of land in Palms was donated, just a block from where the church now stands.

Drawing from that rich history of worldwide engagement, St. Mary’s in 1994 hosted a polling place for the Republic of South Africa’s first free election. Parishioners also recall participating in civil rights marches, walking picket lines in support of Cesar Chavez and the United Farm Workers, raising funds for Amnesty International, sponsoring medical missions to Ghana and Liberia, working in AIDS luncheon programs, contributing to the local food bank at St. Augustine’s and, in the wake of the September 11, 2001 attacks on the World Trade Center, reaching out in solidarity to Muslims at the nearby IMAN Cultural Center.

The parish has sponsored refugees from Liberia and sheltered two Cameroonian physicians who sought asylum here. Since 2003 it has offered weekly masses in Spanish as well as English. In 2015 it helped establish the Palms Emergency Preparedness Coalition, whose earthquake supplies fill barrel after barrel in the rectory garage.

The church typically holds daily mass, said every weekday and sung on Sundays and all feasts of holy obligation.

According to Shamo, Williams graciously accepted the congregation’s invitation to preside and preach at their centennial service some 18 months ago.

“The grace of God made it possible for Rowan Williams to come and not only bless our community, but the diocese as well,” he said. He first met the archbishop when Williams visited to Ghana, Shamo’s home country. Williams also has longstanding friendships with literary historian and scholar Debora Shuger, who is St. Mary’s senior warden; and with the Rev. Canon Ian Davies, rector of St. Thomas the Apostle Church, Hollywood, and dean of Deanery 3, in which St. Mary’s is located. 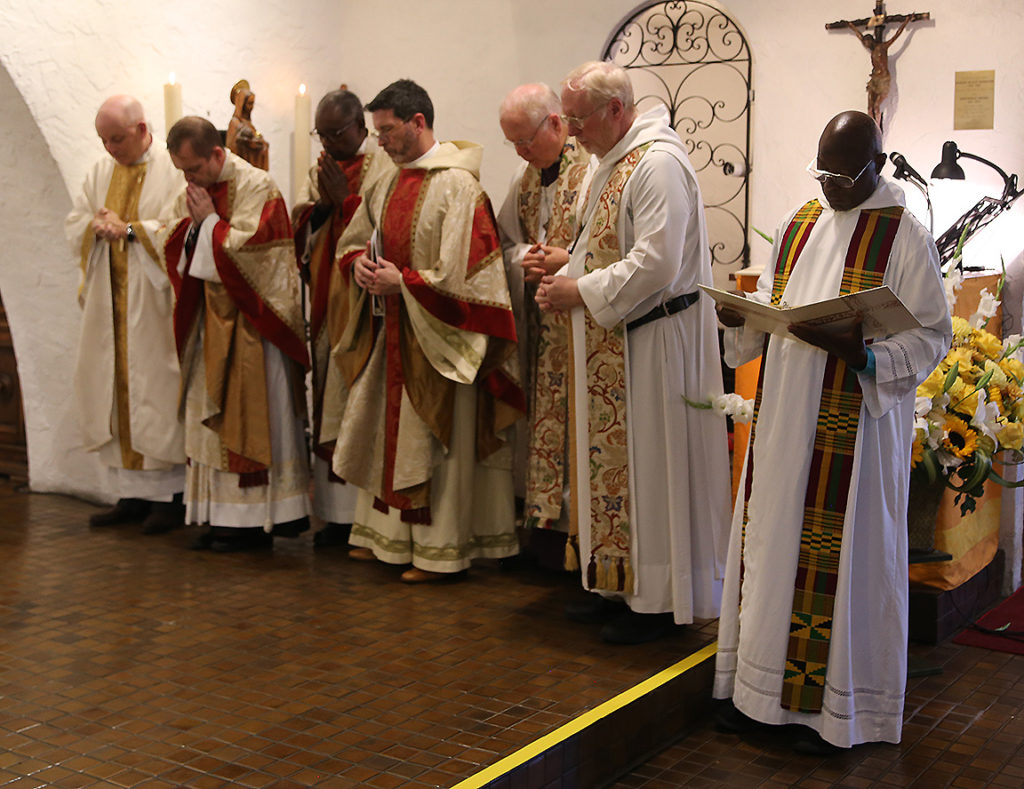 Williams: The church as mother

In his sermon, Williams told worshippers that church mothering includes feeding, nourishing and witnessing to the lives of neighbors.

“The gestation of a child in the womb cannot be hurried,” he said. “Our own family experience was indeed that our first daughter was extraordinarily reluctant to come out into the world and took her time about it, thereby setting a lifetime habit of staying in bed in the morning. Things cannot be hurried; life grows at its own pace and the mother does not control that pace, but serves and nourishes it.” 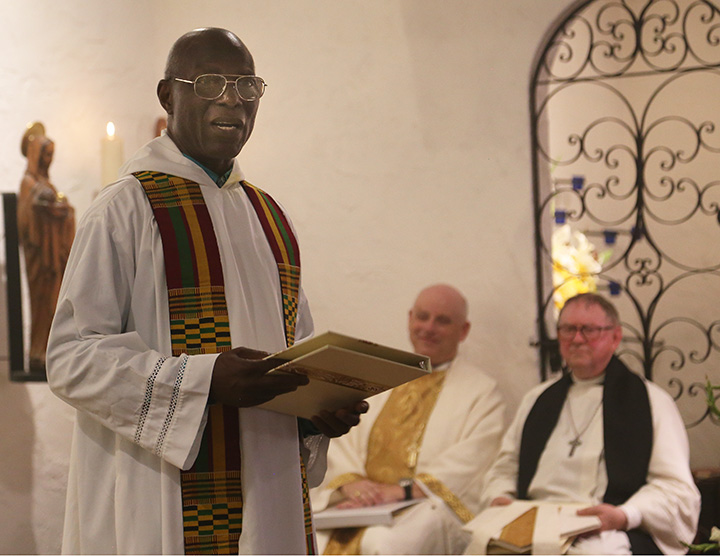 Churches, like mothering, are also places of patience, where time is given for God, for growth and maturing, he said.

“God knows the culture we live in [is] a culture which increasingly treats time as though it were the rarest of rare, as if there was some shortage of time, like a global shortage of fossil fuels,” he said.

Continuing the image of motherhood, he added that gestation is a time when one body feeds and nourishes another, “and if we are a mothering community, that simple giving of ourselves to nourish our neighbor is at the heart of our discipleship. We are there so that the neighbor may live. The simplest thing we are called to do as Christian disciples is to feed the neighbor in body and in spirit. We do it to please God.”

Nourishment also comes from the simple willingness to share another’s life and burdens, he added. “We also nourish by who we are. We feed the neighbor by showing the signs of hope and love and mercy in our lives. We give the neighbor something to live for by how we live.

Returning to the witness of Mary, the mother of Jesus, he cited her deep involvement in her son’s life, even to the point of “uncomprehending patience.

“She doesn’t know what’s coming. She’s been warned that a sword will pierce her soul and she moves on … into uncertainty, not fully knowing what her son is doing and yet confident in patience and in being there.” 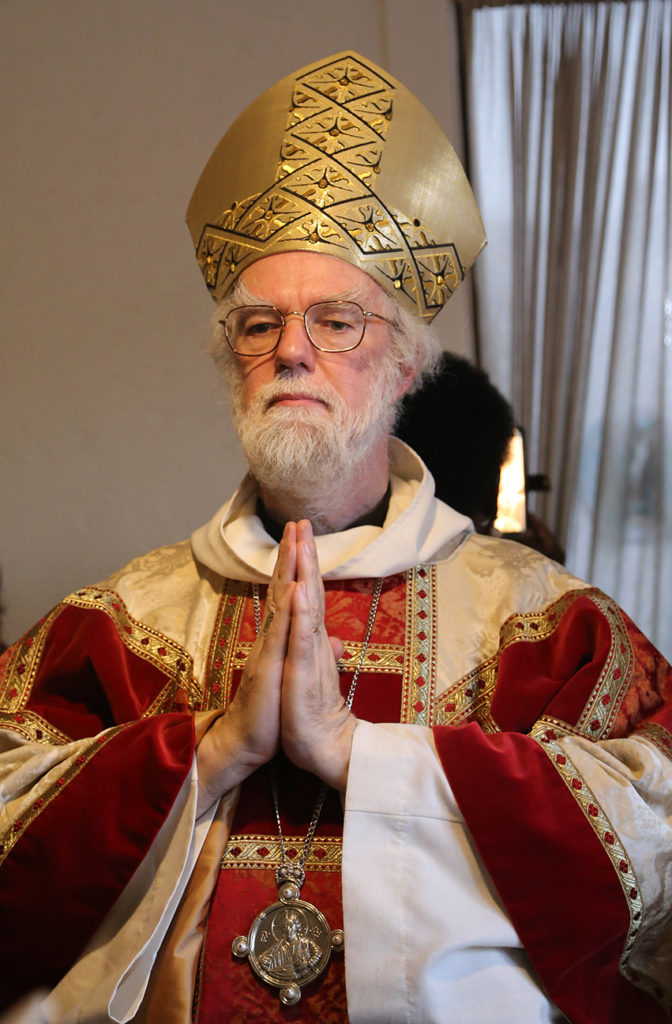 Archbishop Williams leads the altar party in a final prayer at the end of the centennial service. Photo: Janet Kawamoto

She is present with her son throughout his ministry, even at the foot of the cross, he said; “the very depth of his agony and his isolation … Because, dear friends, that is where our mothering reaches its climax.

Mothering churches are present to neighbors, regardless of their faith or background, especially those who are desperate because that is where Christ is, he said.

He called upon churches to bring Christ alive wherever they are, “bringing new birth, enlarging the world you live in, bringing that unimaginably precious gift of time and attention and patience, allowing somebody to talk their heart out and, of course, nurture and comfort.

“If we can live as that kind of church, we live something of the closeness that our lady has to Christ. We live from that mysterious intimacy Christ shares with us all. Christ, in whom the fullness of God grows, humbling himself. Mary, humbling herself, to receive from her child the new world she was to grow into.”

During a four-day visit to the Diocese of Los Angeles, Archbishop Williams also led a program and discussion at the Cathedral Center for diocesan clergy, and visited St. Margaret’s School in San Juan Capistrano, where he answered questions in an upper-school bible class, toured the campus and preached at a middle-school chapel service. More about his visit will be reported in The Episcopal News.