The Rev. Canon Stephanie Spellers, canon to Presiding Bishop Michael Curry for Evangelism, Reconciliation and Stewardship of Creation, will preach at the Sunday, Nov. 15 virtual Eucharist that will conclude this year’s online Diocesan Convention, “Servants of the Spirit.” 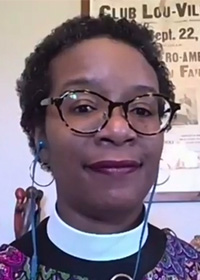 Spellers, who delivered the sermon at the 2012 Martin Luther King Day celebration in the Diocese of Los Angeles, is a noted leader in the Episcopal Church, focusing largely on peace and justice issues. On July 4 2020, Spellers, along with the Rev. Canon Kelly Brown Douglas and the Rev. Winnie Varghese, issued “Speaking of Freedom: A Letter to the Church on Breaking Free of White Supremacy,” which called on the Episcopal Church to face up to its historic complicity with racism and white supremacy.

Spellers was previously a faculty member and director of Mission and Reconciliation at the General Theological Seminary in New York, where she resides. She serves as a consultant for various church organizations and as an editor at Church Publishing Inc. Previously she was canon for Mission Vitality for the Diocese of Long Island and a member of the chaplain team for the House of Bishops. She served as the co-chair of the church-wide Standing Commission on Mission and Evangelism (2009-2012). Spellers was the founding priest of The Crossing@The Cathedral Church of St. Paul-Boston, and before ordination worked at Harvard Divinity School and as a religion reporter.

She is the author of several books, articles and resources focused on embracing emerging cultures and Episcopal traditions, including Radical Welcome and The Episcopal Way (with the Rev. Canon Eric Law of the Diocese of Los Angeles).  A former Episcopal Church Foundation fellow, she graduated from Episcopal Divinity School with a master of divinity degree; from Harvard Divinity School with a master’s in Theological Studies; and from Wake Forest University with a bachelor’s degree in religion.

Convention business in an age of pandemic

All business sessions will take place via the internet on Saturday, Nov. 14. Clergy and lay delegates will check in on their own laptops or other devices, and will be able to vote using a secure website. All in the diocese will be able to watch the proceedings via livestream; information on how to log in will appear in the Update as the date draws near.

Delegates who are concerned about how voting will proceed will have an opportunity to test the system at a practice session, currently scheduled for Saturday, Nov. 7, 10 – 10:30 a.m., a week before the actual meeting, according to Samantha Wylie, convention coordinator. She says she also plans for some virtual Q&A sessions in the week before the convention at which she and Secretary of Convention Steve Nishibayashi can respond to any concerns.

Worship will be held online throughout the convention, concluding with the Sunday Eucharist, at which Bishop John Harvey Taylor will celebrate and Spellers will preach. Arrangements will be similar to those for Taylor’s recent all-diocese service; it will be streamed live on Facebook and YouTube. The virtual arrangements will allow all the people of the diocese to take part in the Eucharist. An online offering will benefit the One Body One Spirit emergency appeal that has so far raised some $200,000 to assist congregations that are struggling due to the pandemic.

According to liturgy committee members the Rev. Canon Susan Russell and the Rev. Michelle Baker-Wright, morning, noonday and evening prayer at the convention will follow the lectio divino model, and will include music, reflection and prayer mirroring the diversity of the diocese. Worship booklets will be available via the diocesan website in English and Spanish.

Nominees are welcome for a number of diocesan offices, all of which are listed on the website here. The Episcopal News has published a series of articles that outline the work done by these groups, and potential nominees are encouraged to read them for further information.

Nomination forms are here (scroll down the page). Nominations may be made up to and including the day of convention, but the deadline for those to be published in the convention booklet is Nov. 3. To see a list of current nominees, click here. The webpage is updated every Friday.

Shopping and browsing among the booths of the convention exhibit hall are usually favorite break-time activities for convention-goers — pleasures they will not have to give up entirely in this pandemic year. The exhibit hall has gone online, with photos, links, descriptions and catalogs to allow participants to place orders and learn about ministries. The virtual exhibit hall is already online here, and is updated weekly.

Instead of holding a full day of online workshops the Friday before convention, convention planners have chosen to hold a kind of continuing ministry fair, with workshops offered about twice a month throughout the program year (usually September to June). Present plans call for a finance workshop each month, along with a second session featuring rotating subjects. More information will be posted soon.

Although they will be unable to meet this year in their usual convention-center room, spouses of clergy in the diocese will be invited to a virtual get-together on Nov. 14; just “a brief check-in,” according to Canon Kathy O’Connor and Canon Stephen Bruce, spouses of Bishop Taylor and Bishop Suffragan Diane Jardine Bruce, who organize the spouses’ gatherings. Spouses will be sent log-in information in coming weeks.

Because of the shortened convention schedule this year, the annual deanery pre-convention meetings will be especially important. Meeting arrangements will be handled by each deanery, led by its dean and president; all will be held online. One or more members of the diocesan staff will attend each meeting.

A list of deaneries and their member congregations is here.