Stolen Rembrandt sketch turns up at church office in Encino 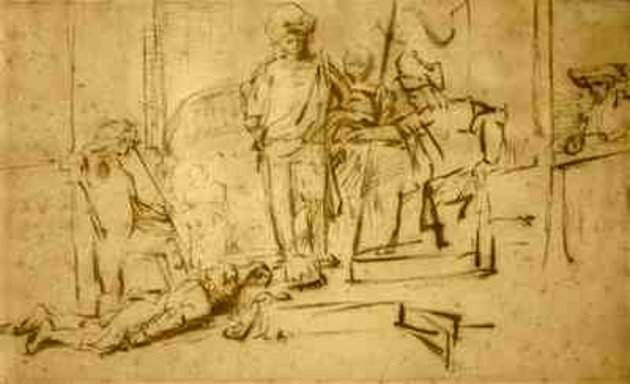 “The Judgment,” a sketch by Rembrandt that was stolen from a hotel in Marina del Rey on Aug. 13, turned up several days later at St. Nicholas’ Episcopal Church, Encino.

[The Episcopal News] The Rev. Michael Cooper was as surprised as anyone, including local authorities, when a stolen Rembrandt drawing turned up in his Encino church office two days after it went missing from a ritzy Marina del Rey hotel.

It’s anybody’s guess how the 11-inch-by-6-inch quill-pen-and-ink drawing made the 20-mile trip from an Aug. 13 exhibit at the Ritz-Carlton Hotel to St. Nicholas’ Episcopal Church, Encino, on Aug. 15, but Cooper was enjoying the moment’s small ironies — and an international spotlight.

“Get this, the title of the sketch is called ‘the Judgment,'” Cooper chuckled during an Aug. 17 telephone interview from the office where the drawing was discovered Monday evening. “I told one of the media guys, you’d better be doing something with that.”

Cooper said television and newspaper crews camped out at the church parking lot after local sheriffs announced recovery of the drawing, which dates to c. 1655 and is valued at about $250,000, from “a local church.”

“They didn’t release our name but they gave our location—a church in the 17100 block of Ventura Blvd,” said Cooper. “Well guess what, they [the media] figured it out.”

News of recovery of the 17th century Dutch master’s sketch sparked headlines from California to Pakistan. The story was carried in both secular and religious media and also created quite a stir among members of the 72-year-old Anglo-catholic parish “where the first rector’s wife is still a parishioner,” Cooper said.

Los Angeles County Sheriff’s spokesperson Steve Whitmore said the theft occurred between 9:20 p.m. and 9:35 p.m. on Saturday, Aug. 13. A curator told investigators he was distracted by a potential buyer for other art in the private exhibit sponsored by the San Francisco-based Linearis Institute. The institute is described on its website as “a public repository for the visual arts specializing in works on paper by great masters of the past 500 years.”

“When the curator turned back to the Rembrandt, it was gone,” Whitmore said. It was unclear if the person talking to the curator was connected to the theft but authorities said they believe more than one suspect is involved. A curator later confirmed the drawing’s authenticity.

Art experts said Rembrandt’s works are popular targets for thieves. Anthony Amore, chief investigator at the Isabella Stewart Gardner Museum in Boston and co-author of the book “Stealing Rembrandts,” told the Los Angeles Times there have been 81 documented thefts of the artist’s work in the past 100 years.

Cooper said he understood that about 22 works of Rembrandt have been stolen in America and “only two have been recovered. This is the third to be recovered here. That’s kinda cool.”

A retired Los Angeles County deputy sheriff, Cooper added good-naturedly that authorities had assured him he is not a suspect in the crime, nor is the Rev. Barry Verdi, who discovered the sketch Monday evening.

Verdi, a pastoral associate who leads the church’s Spanish-language services, has Monday evening office hours. He had propped the office door open during a brief visit to the sacristy. When he returned, the sketch had been placed on a chair.

“He recognized it from seeing it on the news. He called me up and said, ‘You’re not going to believe what I just found in your office,'” Cooper recalled.

Cooper’s legal instincts kicked in; he advised Verdi not to touch anything at the scene and called authorities to report the discovery.

Investigators arrived and took possession of the sketch, but CSI fans might have been disappointed — there was no dusting for fingerprints or DNA samples taken at the scene, Cooper said.

But there was another humorous note. The lead detective on the case is Clarence Williams, “the same name as the actor from the Mod Squad” television series, Cooper joked.

He speculated that perhaps both the theft — as well as the recovery — of the sketch occurred during moments of opportunity.

“Everyone kept asking, why leave the sketch here?” he said. “My only thought was that we’re on Ventura Blvd. It’s a very busy part of the [San Fernando] valley. There’s a lot of foot traffic and traffic. It could have been as simple as somebody said, hey there’s a church; the lights are on.”

Two groups — a women’s bible study and a recovery support group — were also meeting at the church at the time. Cooper said a reporter asked if he thought a parishioner might be responsible for the theft.

“I can’t imagine it,” he said. “I have no way of speculating if it was a parishioner — I can’t comment on that. The door was open. There was no forced entry. Nothing was stolen.”

Another reporter wondered if the thief “wandered into the confessional and was wanting to confess.”

Still another said he’d “heard the sketch was left on the church steps.” And another asked if there was a note, perhaps of contrition, accompanying the sketch’s return.

Reporters also wondered whether life should imitate art, when the thief is captured, Cooper said. “They also asked me if, being a former law enforcement guy and now a priest, do you think if this person’s caught, they should be forgiven or condemned?

“I said the church is in the business of reconciliation,” Cooper said. “While I’m also a firm believer that we should take responsibility for our actions I also believe in God’s great forgiveness and grace.

“I would try to persuade them to turn themselves in, knowing God is a loving, wonderful, redeeming God and we can overcome anything together. I always say, name it, claim it, get rid of it. Give it back to God. Do whatever it takes to reconcile yourself to God.”

Meanwhile, Cooper said he has not heard from either the Linearis Institute, which owns the sketch, or from the Ritz-Carlton.

–The Rev. Pat McCaughan is a correspondent for The Episcopal News, Diocese of Los Angeles.