The Margaret Parker Lecture: ‘Whose movement are you in? Which side are you on?’ 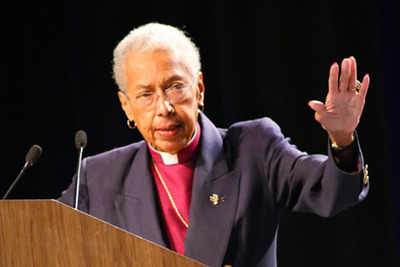 While delivering the third biennial Margaret Parker Memorial Lecture on “Justice and Peace through the Empowerment of Women,” Harris, 83, the first woman consecrated a bishop in the Episcopal Church and the Anglican Communion, cautioned Dec. 7 that she’d “left off lecturing and gone to preaching. You all invited me to lecture but God called me to preach.”

The church has arrived, according to Harris, at a “come to Jesus moment” the essential taskå of which is to decide whether or not to be progressive evangelists and, paraphrasing well-known preacher Dr. Tony Campolo, “prophetic proclaimers and enablers of God’s kingdom in the here and now.”

In an address punctuated by frequent applause and choruses of “amens” and “all rights,” Harris raised several issues for consideration:

To which she added: “Whose movement are you in? Which side are you on?

Rather than restructure the church, the time has come to re-vision it as a movement rather than an institution, she said.

“Institutions are organizations that value their own survival over progress and permit one group of individuals to make decisions about what another group of people will do,” she said. “A movement, on the other hand, assumes that the people doing the work, that are taking the risk, make the decisions.”

The baptismal covenant is a movement

Citing the civil rights movement as an example, Harris said the “tension within Christianity must always be between not losing the sense of our movement and empowering all baptized persons to make decisions both individually and collectively that will lift up the cross of Christ, while at the same time maintaining our integrity and our identity as a community of believers who, through our mutual discernment, in fact determine appropriate ethical and moral positions as new occasions arise and demand them.”

Sunday after Sunday the baptismal covenant is repeated somewhere, Harris said. “We have to recognize that it is a movement to respect the dignity of every human person and to seek justice and reconciliation.

“It is universal in scope and is carried out in different ways in different places in different times. We are not always called to initiate the struggle or to define the goal but more importantly, to identify where the struggle for human dignity currently is being waged and, as Bob Dylan used to sing, ‘get the hell out of the way if you can’t lend a hand.’”

Invoking those cited in Luke 4:18 (“The spirit of the Lord God is upon me because the Lord has anointed me to preach good news to the poor … to bind up the broken-hearted, to proclaim liberty to the captives and the opening of prisons”) as Jesus’ circle of concern, Harris said a good starting place is “the unfinished agenda of the old civil rights movement.”

It “becomes the continuing agenda for the people of God who are committed to peace and justice,” she said. “That agenda finds many points of entry and many outlets for the discerning and the caring who understand that it is more important to be loving than it is to be right.”

Topping the agenda are combating racism and working toward real economic opportunity at home while challenging foreign policy to truly support freedom and to redress the economic mal-distribution of wealth and resources in developing nations, added Harris.

Her prophetic ministry has served “as a seed of hope for millions of women and men around the world,” according to Los Angeles Bishop Suffragan Mary Glasspool while introducing Harris.

Glasspool said she heard Harris tell a 1988 gathering at the Episcopal Divinity School, “‘We all know when the first woman is elected bishop, it won’t be someone with kinky hair or dark skin like me.’

“It jabbed at my heart and conscience,” Glasspool recalled.

She and others asked Harris to consider standing for the election of a bishop suffragan in Massachusetts that fall. Eventually, Harris agreed; she was elected Sept. 28, 1988, and consecrated in 1989.

“The power of the Holy Spirit has been blowing fresh new breezes throughout the church and our world ever since,” Glasspool said. It “demonstrates what will happen when entire communities make the ground fertile and prepare for a seeds of hope and the living treasures we have in our midst.”

Harris told the gathering of convention delegates, visitors and guests that while she had never met Margaret Parker, the lecture series namesake, “the ideals for which she stood and the justice work she undertook and for which she advocated should be an inspiration to the whole church.”

The lecture series theme, of peace and justice through the empowerment of women “brings to mind that we are approaching an important milestone in the life of the church,” she said. “July 29, 2014 will mark the 40th anniversary of the irregular ordinations of 11 women to the priesthood, the Philadelphia 11, which took place in my home parish, the Church of the Advocate, and which stood this church on its ear.”

She commended the diocesan Seeds of Hope initiative and added, “Together as the people of God, there is something we can be about that perhaps can make a difference in the lives of some of the least, the lost and the left out.”

Remembering the late South African leader Nelson Mandela, who died Dec. 5, she noted that the post-apartheid country’s model of truth and reconciliation commission “looms large as a challenge to the rest of us as we seek to address the obvious injustices that exist in those parts of the world that were subjected to colonialism in the 18th, 19th and 20th centuries and whose indigenous people still are seeking their share and their seat at the table.”

The martyrs of the human rights struggle would be working toward the eradication of international debt and implementing the millennium development goals if they were here today, she added. “It is where those of us who claim their legacy for the re-visioning process have much work to do, whether it is peace in Syria, the Sudan, Bolivia or Boston, the issues are basically the same.”

In other words, “how do we replace guns with hope and the urge for ethnic cleansing with the bond of mutual respect?”

The movement is calling us, simply put, “to be our brothers’ and sisters’ keepers” and not count the cost of doing so, she said.

This remnant most likely will be found “on the fringe of established religions and institutions. Comfortable pews, safe religion, tradition-bound faith have never been at the cutting edge of history or spiritual renewal,” she said.

“Loneliness, humility and suffering are the lot of the remnant of God in any age, including our own, but it is through this weakness God’s strength and victory will be perfected and reflected in a rich harvest of a redeemed and liberated humanity and finally, the remnant must be willing to be used, shaped and reshaped by God.”

The remnant of God “lives and looks to the future,” Harris added. “We have a choice. We can join the movement … or by unconscious default the symbol of the 21st century may indeed be a machine gun on every street corner. The choice is ours, the moment is now. Whose movement are you in? And, in that spirit, which side are you on?

A video of Harris’ lecture is available on Youtube.

For many years Parker counseled, inspired and “co-pastored” alongside her husband, the Rev. Canon Richard I.S. Parker, during his 42-year tenure as rector of St. Cross Church in Hermosa Beach. She also carried out an active ministry among the Episcopal Church Women of the diocese and Church Women United, among other organizations. She was a lifelong advocate for the empowerment of women, and helped lead the way as the Episcopal Church began to call more woman and people of color to leadership roles during the 1960s and 70s.

Margaret Parker was a co-founder of the “Today’s Woman” conference (later “Tomorrow’s Woman”), and was named an honorary canon of the Cathedral Center of St. Paul by Bishop J. Jon Bruno.

The lecture series honors her life and ministry by addressing topics of peace and justice through the empowerment of women. Presiding Bishop Katharine Jefferts Schori delivered the inaugural address in 2008; the second was given in 2011 by the Rev. Jim Wallis, evangelical leader, author and founder of Sojourners magazine.