To Be Fed And To Feed: A sermon by Bishop John Harvey Taylor 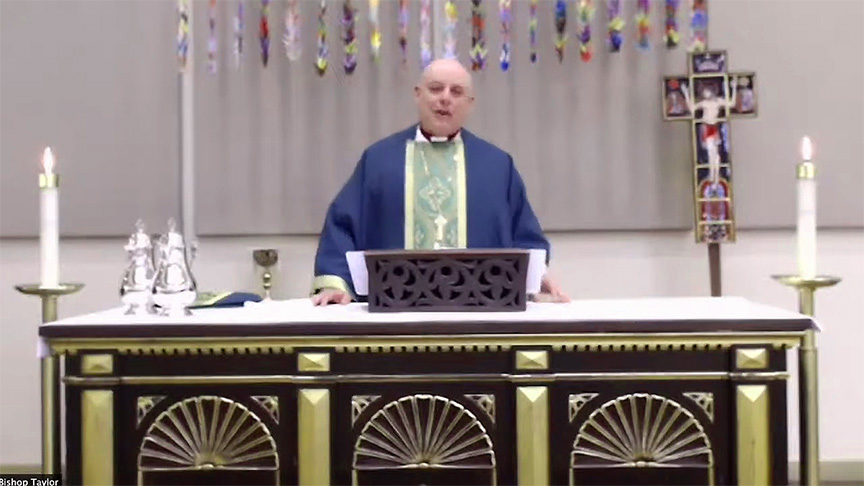 Bishop John Harvey Taylor is pictured in this screenshot from the all-diocese service he conducted from St. Paul’s Commons on Sept. 20.

Bishop John Harvey Taylor of the Diocese of Los Angeles delivered the following sermon during an all-diocese worship service on Sept. 20, 2020. El texto aparece en español a continuación. The text appears in Spanish below. Video of the service is here (Facebook) and here (YouTube).

Listening to holy scripture this morning, we find the people of God in a complaining mood.

In the wilderness with Moses and Aaron, their hunger makes them forget they’re free. They don’t remember the sting of the lash or the indignity of being oppressed.

They just remember the aroma of their supper, simmering in fleshpots over the fire.

So it would be for any of us if we missed two or three meals involuntarily. So it is for any of our neighbors who don’t have enough to eat.

The story ends beautifully. The people are fed. God feeds them.

Our Lord’s parable in Matthew’s gospel is meant to remind us of our complaints whenever someone gets more than we; our resentment, if they receive what we feel they haven’t earned; our unfairness, when we push to the front of the line at the expense of others; our arrogance, if we think ourselves more deserving of God’s blessing than our neighbor.

This story also ends beautifully. Our God in Christ offers grace and love without preference or prejudice, offers it abundantly to all, offers it as an example of how we are to behave toward one another.

We’re most likely to forget during wilderness times such as these. A global pandemic. The deaths of nearly 200,000 in our country alone. These are wartime numbers, numbers that mean that almost all of us know someone who’s been seriously ill or who has died.

Grandparents who haven’t seen their grandchildren since Christmas. Students, parents, and teachers doing their magnificent best with Zoom school and yet fearing that it won’t be good enough – that everyone’s falling behind.

Tens of millions out of work and a government that can’t figure out how to take care of them.

Other heartbreaking reminders of emergency and the imperfection of our national union: The persistence of white privilege and racial injustice; a shameful immigration system; our rancorous, polarized politics; persistent efforts to make it harder for people to vote.

The death of a beloved Supreme Court justice, who devoted her life to equity and justice.

Wildfires all over the West Coast. An earthquake Friday night in the Diocese of Los Angeles.

The whole congregation complained against Moses and Aaron in the wilderness.

We know how they feel. Do you ever just want to scream? I know Kathy and I do. Our lives are comfortable and privileged. We count and cull our blessings. The extra time to read. Finding two more Charles Wysocki jigsaw puzzles at Target. Maybe go for a car ride just to be out of the house. Our FaceTime calls with our granddaughters, Frannie and Harriet, and their families.

And yet we are all grieving time together that is gone forever. Precious and unique moments that just never happened.

Last Sunday there was a photo in the paper, taken before COVID-19, of three older men smiling and huddled together on a bench in Morocco.

The caption said that physical touch is important in Moroccan culture. I didn’t know that. I did know it is important in Episcopal culture. We are a hug- and handshake-deprived people – tactile pilgrims wandering in a non-tactile wilderness.

My friends, you have given up the Sunday morning experience you love for the sake of the higher love, the love that sacrifices and gives up and gives away. Behaving as you have, choosing to spread love instead of the germ, you have kept tombs empty and made every Sunday an Easter Day.

But it’s been a rough six months. And of course, it’s not over. It’s vital that we acknowledge the emotional and spiritual toll the times are taking on us and those we love. Kathy and I daily feel the weight of discouragement. I know you do, too.

Why have you brought us out into this wilderness to kill the whole assembly with hunger?

We are tempted to count this year as cursed. We may even close our eyes and imagine an old-fashioned wall calendar with a giant black X through the year 2020.

History will remember it as lost to COVID-19 and its attendant injustices and dislocations.

But my siblings in faith, nothing is ever lost to Christ.

We have been prepared for times such as these.

It all began in times such as these.

In ancient Palestine, Jesus Christ and the gospel and the church were revealed not in the royal courts of privilege and wealth.

The Incarnation and the Resurrection ignited in the midst of poverty, disease, injustice, oppression, and prejudice. To a dark age first came the gospel promise that the darkness will never overcome the light.

Christians are never victims of their times. When times are bad, they get to work, glorifying God and caring for God’s people.

Christians never bemoan the spirit of the age. They are servants of the Holy Spirit, modeling love when the world wants to hate; the timeless wisdom of God’s word in contrast to the worldly lure of alternative facts; peace when the world yearns to be at war; justice when unjust systems crush and hurt God’s innocent people.

As a matter of fact, we have been prepared to be at our best in the wilderness. If we err — we evangelists of the gospel of love — it is in thinking that our formation as Christians is complete.

So as this program year gets underway around our diocese, in all our churches and institutions, let’s get back to the basics of our shared work of mission and ministry.

First, we praise and thank God, every day, no matter what, being attentive to our prayer life, and remembering during this stewardship season that in thanksgiving we offer up to the whole body out of our first fruits.

Second, we listen and learn. Christians who are discouraged by the spirit of the age resolve nevertheless to absorb what it teaches.

My reading this season has been about white privilege and fragility and our obligation as citizens to form a more perfect union. The oath we memorized as children embodies wisdom about both Christian and secular systems. One nation, under God, indivisible, with liberty and justice for all.

It is because we so persistently fail to practice what we’ve preached generation upon generation — what we’ve taught to tens of millions of schoolchildren — that it’s become essential to add these words whenever we make our patriotic oath: #BlackLivesMatter.

We also have the obligation to listen to those with whom we disagree, and to those whose experience is fundamentally different from ours. May the divisions in our nation renew our search for Christ’s common ground, even if we can agree on nothing else but our sacred obligation, our moral obligation, our inescapable obligation to love God and our neighbor without any condition or exception.

Third, Christians forgive and seek forgiveness. In this time of confinement and isolation, we can always repair a broken church, family, personal, or workplace relationship, atoning for what we have left undone by acting in the name of Christ’s reconciliation.

Fourth, we advocate and serve. A priest in one of our most socially engaged churches told me last week, “There is more work than is reasonable. But this is the work that is here to do.”

For the hungry and unhoused; the asylee, immigrant worker, and essential worker; the church friend isolated at home or in convalescent care. When we’re discouraged or even angry, may these be those to whom we turn our faces in love.

And if you love your church, if you want to be part of our work of making our diocese stronger and better, then consider running for a diocesan office at convention this year. Bring your pet peeve or favorite idea to the councils of the church. Bishop Bruce, Canon McCarthy, and all of us your servants in Echo Park can’t wait to hear them. We have some tough decisions to make this year about the budget. But the future of our diocese and Christendom is no less bright than the light from the empty tomb as you may see it with the eyes of your heart.

“What is it?” the people said. Moses said to them, “It is the bread that the Lord has given you to eat.”

God’s Word. Christ’s body. The simple pleasures of fellowship. The great commandment to love, written in our hearts so that when we’re at our best, we always know the right thing to do. The means of grace and the hope of glory. These are the gifts that sustain us in these times. They always have. They always will.

In these times, however we each experience them, perhaps hope is what feeds us best. Hope makes us feel full, nearly on the verge of bursting, ready to go to work for the gospel and our neighbor. Hope for a better church. A better world and a more decent country. For relationships that grow and thrive even in isolation and quarantine. Hope even that children are learning on Zoom.

Hope that we will always know what to say and do even when we’re feeling discouraged and powerless.

Hope that the last will indeed be first — and that the first will trust enough in Christ’s love to step out of the way and make room, knowing that even in the wilderness, there’s enough for everyone, if we only have faith, if we only have hope.

So stay healthy, people of God. And stay hopeful. You are pioneers of the beloved community. As it was in the beginning of the Christian adventure, it is now and ever shall be for the body of Christ. If we turn to God in love, we will be fed in spirit and body – and in our joy and thanksgiving, we will find it intolerable that anyone else is hungry.